12 Guys I Came Across on Tinder

The first time I became acquainted with Tinder, my friend waved her phone in my face and asked me to help pick out her future husband. We spent the next hour playing “hot or not,” swiping left at the sight of dudes sporting fedoras and swiping right for guys with nice smiles and no Ted Bundy vibes. It seemed strange to me that “dating” has essentially become a virtual game that you can download for free in the app store. I was fascinated, slightly hesitant and very confused by Tinder, so I decided to demystify the puzzle of modern love and downloaded the app for myself (for research purposes only of course). I didn’t find my soulmate, but I did find a slew of hilarious bachelors that run the gamut of super hot to definitely not. And I’ve decided, after swiping through too many self-aggrandizing bios and sleazy selfies that, while hilarious and slightly addicting, Tinder is still really weird. Here are 12 types of dudes I came across. 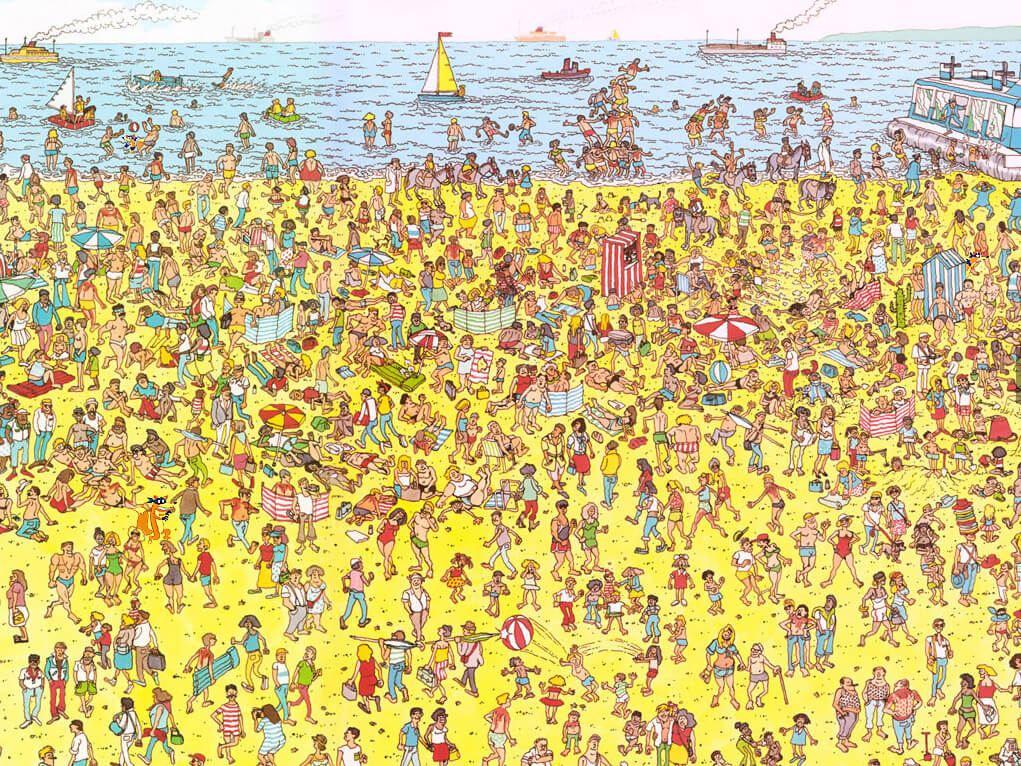 (Image via whitespace.on.ca)
All of his pictures consist of him and ten of his buddies—at the beach, at the club, at their fraternity’s beer pong championship. And if that’s not bad enough, they’re all wearing sunglasses. If I can’t pick you out of a crowd in a profile picture, I sure as hell can’t do it in real life. I don’t have the mental stamina to sit here and cross-examine each picture to play a game of “Which one of these things is not like the others?”

(Image via giphy.com)
Once I “matched” with several guys, they immediately tried to win me over with “witty” pick up lines like “You’re almost as gorgeous as I am” or “Who was your favorite character in CatDog, Cat or Dog?” I thought that one was creative at least, until another match asked me the exact same question. Is there some sort of Tinder icebreaker database I don’t know about?

These dudes learned a thing or two from the MySpace days when it was all about the perfect selfie angle to make you look a) like a model and b) nothing like yourself. He looks good in his profile picture, but in the rest of his pictures he just looks a little “off.”

(Image via giphy.com)
Is he Slenderman? Is he my soulmate? The world may never know because his profile picture simply features a sunset and a blurry silhouette. The next one highlights a picturesque mountain, a few pine trees, maybe some fog rolling in. Is that tiny dot in the corner supposed to be my next coffee date? How will I even recognize him? Who takes these pictures?  A million questions ran through my head as I swiped to the left. There’s plenty of fish in the sea, and I prefer the ones whose faces I can actually see.

(Image via giphy.com)
Mystery Man’s overconfident counterpart: the Butterface. His game plan: distract you with his six pack and biceps so you won’t worry about what his face looks like. These guys try to seduce with the gym selfie or the shirtless bathroom shot. A blank bio (or something about gains or lifting) and a sole common interest of Dwayne “The Rock” Johnson are red flags. My liking “The Rock” on Facebook was either a drunken move or satirical (probably both), but I have a nagging suspicion that his was neither.

(Image via tumblr.com)
These guys find it necessary for you to know their ethnicity, how tall they are, the lyrics of their favorite song, their favorite book/movie/bible quote, their blood type and their ErdÅ‘s–Bacon number. I’m already exhausted. Wait, our shared interests are Modest Mouse and Taco Bell? Maybe we’re soulmates. 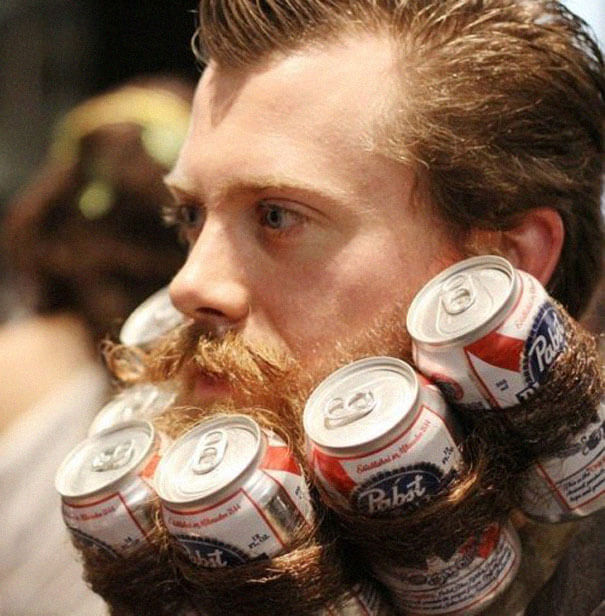 (Image via kazani.gr)
Beards, beer and bikes. What does that mean? Yes, my friends, it’s the ever-present hipster. His profile includes weird facial hair of varying forms, round-rimmed glasses and “candid” photos of him with fair-trade coffee/IPA/a fixed gear in front of his local American Apparel or Goodwill. I would swipe right, but I’m secretly embarrassed because he has better style, and probably a wider vocabulary, than me.

(Image via giphy.com)
His picture features him cross-legged and barefoot with an easel or a ukulele at what appears to be the peak of Machu Picchu. His bio indicates that he studies at a prestigious art or music school, but he’s taking “a gap year” to explore the world, and hopefully meet his Tinderella along the way. 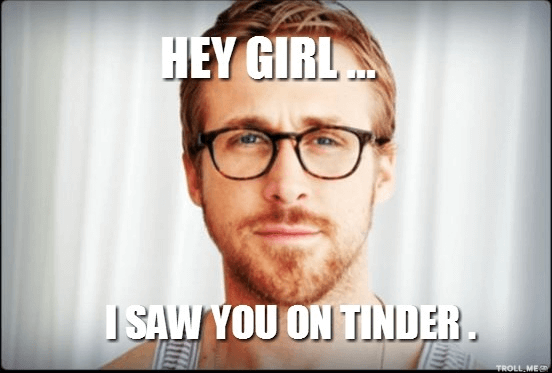 (Image via troll.me)
In between the “hell no’s” and the “hello’s”, I came across a few dudes with perfectly tan skin and smiles that would put the sun to shame. You get so lost in their eyes that you forget where you are—on Tinder. You start to wonder why such a perfect human is looking for love on an iPhone app. Then my eyes start to narrow…maybe it’s because such a perfect human doesn’t exist. I sigh and swipe left, thinking to myself that he’s too good to be true. Then I instantly regret it. What if he was real and we were the perfect match? Tinder needs a rewind button.

(Image via tumblr.com)
In my swiping career (the several days I’ve used Tinder), I have come across several guys that made me think, “Wow, he’s really cute. Why is he on a dating site?” And then there’s the guys that make complete and total sense. These guys have curated a series of really bad pictures, like ones of them alone at the club with aviators on. Granted, those lasers in the background look pretty bright. Unfortunately, our future together looks pretty dim.

(Image via giphy.com)
Pictures of a girl on his shoulders at the beach or hugging him in blurry bar pics don’t look so good on a “dating” app. That picture of him with that cute blonde screams nothing more than “I have proof that I talk to girls! Date me!” That better be your sister, bro.

(Image via giphy.com)
I found a disconcerting number of dudes with profiles that included things like “World’s Best Cuddler” or “Undefeated Cuddling Champion.” Getting his degree in snuggling or being the mayor of Cuddletown won’t pay for the first date. And I’m sure he uses this app because all he wants to do is find someone to “cuddle” with…
Since I’m still both bewildered and slightly afraid of what Tinder has to offer, there’s a lengthy list of guys in my “Tinder Purgatory”—the guys I “matched” with that wrote me a plethora of “what’s ups” and “hey cutie”s that never received replies. More than likely, they’ll move on to their next prospective soulmate, sending them winky faces in hopes of finding love, but mostly just attention. It’s really no different than Instagram or Facebook, or real life for that matter, it’s just more upfront. If only I could “left swipe” that creepy dude that always hits on me at the coffee shop.
For more on the demystification of Tinder, check out:
Why Are We Embarrassed about Tinder?
8 Reasons Students Still Use Tinder
Tinder: Changing the Landscape of Online Dating

Previous Post:The Ultimate Senior Bucket List
Next Post:From a Junk Drawer to a Dorm Near You: 25 Things Youâ€™ll Forget to Bring to College