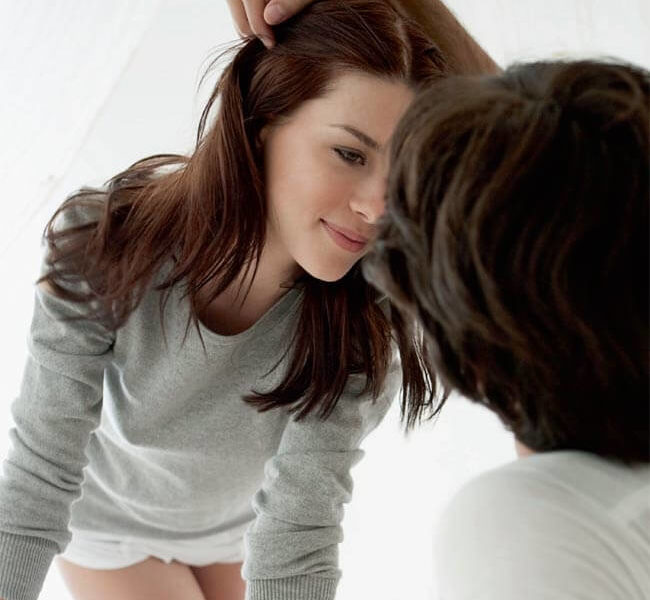 One of the best parts about being a girl is not having to work that hard for sex. A lot of times it's as easy as texting a guy “DTF,” and waiting for him to show up the door, hot and ready like an ordered pizza. Of course we want it too, but our lower testosterone levels allow us to go without it much easier, which gives us a little bit of power over whether it happens or not. But there's a catch.


It's easy to get a guy into bed. It's a lot harder trying to get him to stay in it for more than 5 minutes after, or even to come back. Any girl with a pulse and a wet hole can seal the deal with somebody, but here's how to make yourself more than that.To be a girl he wants to sleep with (and more), and not just the nearest storage shed that he'll occupy merely out of pure primal instinct, these are important tactics to use and qualities to possess.

Play Hard To Get

Inarguably the oldest trick in the book, but it stands true nonetheless. Have you ever asked yourself why so many men hunt, or obsess over video games, or play competitive sports? It's all for the same reasons: the chase, the challenge. Where's the fun in hunting a deer that walks right up and licks the barrel of the gun? Or dunking in a 4-foot hoop? There isn't any. Don't walk yourself back in the band of a slingshot and launch your shit at him 90 mph. Make it a little harder and you'll make him a little harder. If you don't answer every single call, and don't make yourself free every single night, then you won't be single very long.

Giving off an easy-going vibe can really set a girl apart from others, and it immediately puts you into the “dateable girl” bin. Don't negatively comment on a party's beer selection, or insist on a certain restaurant, or dominate the iPod DJ duties. The expression isn't “control cutie,” “it's control freak,” because being a high-maintenance spazz never will be one of those quirks that can be adorable. Have a good attitude and just go about the night assuming it's going to be a good time, and it probably will be. Be DTF… down for fun. The other kind never hurts either.

Men are extremely visual beings, so capitalize on it. These are, in all likelihood, the prettiest years of our lives, so don't waste it and dress like your mom. Guys don't give a damn what's in fashion, or if baggy shirts are trendy right now – they want to see the shape of your boobs and your butt. A dress that fits you like a sausage casing paired with 7-inch stripper heels aren't necessary, but it can be as easy as a V-neck or a sundress. Fashion designer Edith Head said it best when she said, “Your dresses should be tight enough to show you're a woman and loose enough to show you're a lady.” Simply put, you don't have to slut it up to get attention, but it's what makes guys want to have sex with you.

A girl that talks shit on other girls or shoots dagger glares across a pong table at another is nothing less than annoying as hell. Men don't want to hear women bitch about other women, simply because they really don't care (unless a girl fight ensues, then they might pay attention.) Getting along with everyone at the party not only showcases other qualities you may be striving for – like confidence, class, and being easy-going – but also really gives you a chance to show off your personality. Being comfortable, social, and not being jealous are all very sexy in a girl.

Confidence – even when faked – is extremely sexy, for all the same reasons we find it sexy in men. Don't be afraid to initiate conversation, and keep it going like you can hold your own. Be able to take a compliment, it's such an easy skill that so few girls have. And when it gets to that point of intimacy – don't hide your body and don't be afraid to try new things in the bedroom. Guys will appreciate your energy and boldness, because as far as they're concerned, shyness and inhibitions just get in the way of a good time.

For starters, don't cake on the Maybelline like you're going on stage, it sends off a weird vibe that sometimes puts guys off. Guys like when girls to put in effort to look good, but too much going on isn't attractive. Be natural in the way you act too – give genuinecompliments, order the BBQ pulled pork if you want it instead of the salad, and don't just agree with every word he says like a yes-man. That's not only impossible to relate to, but they're not going to buy it either. You're a living, breathing, thinking person; he doesn't want or need a barbie-like robot blow-up doll.

Be Able to Hang With The Guys

It's a huge plus when a guy can hang out and get along with your girl friends, right? Same deal. It makes things easier, more fun, and he won't feel like you're someone he feels obligatedto pay attention to separately, just a part of the group that is always invited. Even if they don't admit it, men look to their friends for approval, and once they get the Facebook picture confirmation that you are indeed good-looking enough to talk to/have sex with/date, it will be the next important  hurdle to show them that you're fun to actually be around.

Learn to speak their language. There's no 3-credit course required, just turn on ESPN once in awhile and actually listen. You'll definitely raise a few eyebrows in a circle of guys if you can hold your own talking about stats and trades, in a good way. Guys like it because it opens up millions of new avenues of conversation, shows that you're interested in TV other than the stupid Kardashians, and it's something the two of you can enjoy together.

Don't Be A Ditz

A classic mistake girls make when they're trying to get the guy is dumbing themselves down. If you need to resort to Jessica Simpson-style, “is it fish or is it chicken?” comments to be funny, then you need to work on your material. Fourth-grade reading levels stopped being impressive in the fourth grade. He's not going to take you home from the party if he thinks the short bus dropped you off.

Don't Take Yourself Too Seriously

Where's he supposed to fit if there's already a stick up your ass? Be able to laugh at dumb things you do or the mistakes you make, because then that'll make it ok for him to laugh at them too. It's sexy if you can brush something off and laugh because it shows you're not petty or overly concerned with what others think of you. And turn it the other way around, too – guys do dumbass shit on the reg, so jabbing him back about stuff and busting his chops will show him you're a chill girl with a sense of humor.