We all know and love the sweet and sassy, aca-awesome college life that “Pitch Perfect” portrayed in all of its harmonizing, burrito-throwing glory. We also know that most of that is not necessarily true. Don’t get me wrong, I’m a fan of the film, but not everything in college is that (get ready) on pitch in real life. If you’re gonna make a movie about college kids, throw some college kid stuff in there! Here’s 10 ways that real college life differs from that of Beca, Bumper, and Fat Amy’s vocalized fantasy…

Drinking on campus?? Abandoned pools???? Don’t we generally save the alcohol consumption for house parties? And our pools have, you know, water in them (for the athletes, you know)…?!

2. Are there no actual classes at this school?

Yes, extracurriculars take up tons of time, but enough to not have any classes? At all? Not even an open textbook or some notebooks shown in the dorms? College is about fun, but college is also about, you know, learning. Leigh Fairey, Louisiana State University clsss of 2013 (fun fact: the movie was filmed there) adds: “You never saw anyone go to class, do homework, write papers, or cram for a test.”

Sure, it was funny when Chloe vocally jumped Beca in the shower to convince her to audition, but still…girl was a bit creepy. And that guy that randomly showed up next to her (and never reappeared)? I mean, what was that scene even supposed to represent here?

4. What about laundry? Do you just have an endless supply of clean clothes?

If you’re portraying the “college” scene, you gotta throw some household stuff in there. Laundry’s a big one – how about a hamper in the boys’ dorm next to Benji’s magician gear? Just one carelessly thrown t-shirt? Just one? It would make us all feel better about our semi-cleanliness issues…

5. Parents totally wouldn’t (and honestly shouldn’t) have a key to their kid’s dorm room.

Anyone else a little weirded out when Beca’s dad showed up to her dorm and just walked on in? No knocking or anything? I mean, if I were Beca (or even Kimmy Jin) I’d be a little freaked.

6. Speaking of dorms, since when can we stay in them over holiday breaks? 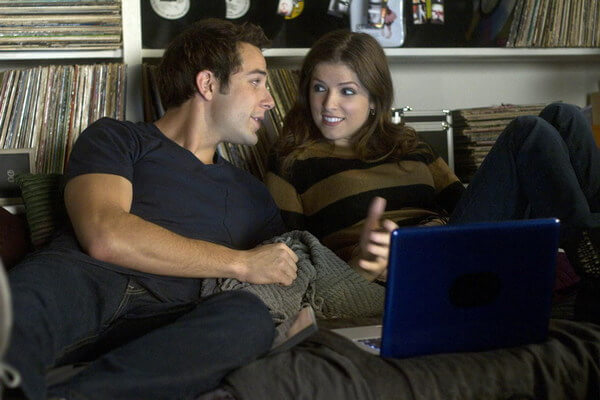 Beca decides to stay in the dorm by herself over spring break? I mean, in an apartment, sure, but for many universities (that I know of), you tend to leave campus for extended breaks. Right? Even Kimmy Jin left. We get that you don’t want to go home, but still…

7. Where are the faculty advisors?

Collegiate groups generally have some sort of adult advisor that helps them out. Groups aren’t usually left to fend for themselves. Is there a secret professor hidden among the Bellas ranks that we don’t know? Says West Virginia Wesleyan College student Jessica Truman: “You’re going to have a faculty advisor, you can’t just do whatever you want.”

Because seriously, he’s perfect. Jesse (Skylar Astin) plays air guitar in cabs, loves movies and Capri Sun, and is a genuinely sweet (and mega-talented) stud. Now, I’m sure there has got to be at least SOME of these kind of caring, wonderful guys on our campuses, we just have to find them. Someone call the Dean of Students or something…

9. Who found Abs of Steel and made him a DJ?

10. Yeah, that thing about exercising…

No, wait, never mind. We are all guilty of Fat Amy’s plight. We may not plop down for some non-vertical cardio every day, but hey, sometimes whatever is closest to napping position.