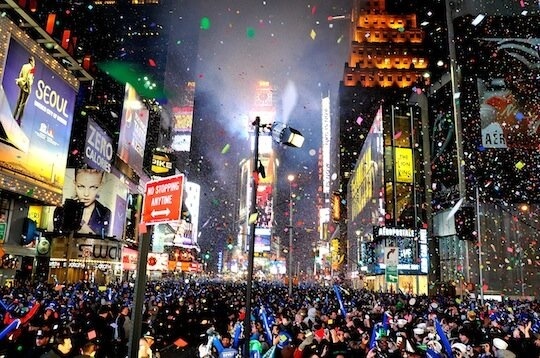 10 Reasons NOT to Go to Times Square Tonight

When I was just a wee lass living in New York City, it was my dream to spend New Year's Eve in the center of the universe–Times Square. After endless begging and pleading, my mother finally let me go with a few friends and let me tell you: I haven't gone back since. These days, when I'm old enough to make my own decisions and don't need my mother's permission to go anywhere, I much prefer to spend New Year's Eve in the company of good friends, in the possession of even better drinks, and most importantly indoors! Here's why:

1. You'll Get Herded Like Cattle: If you're from NYC, you'll understand when I say that NYE in Times Square is like the 2 train, at Penn Station at 6pm, except exponentially more intense. It's totally like a sardine can, and I mean that in the stuffiest, smelliest most disgusting way possible. If you're from out of town, just stay home. Seriously.

2. If You Get In, You Ain't Getting Out: If you choose to ignore me and go anyway, then there are some things you need to know. Times Square spectators get herded into fenced-in enclosures by cops and event security in order to control the crowds. Once the event gets going and you're in one of these enclosures, it's pretty much impossible to leave. And if you do manage to leave, you definitely won't be able to get back in. This isn't one of those "retain-your-ticket-stub-for-readmittance" kinds of things. You ain't getting back in. Period.

3. You'll Have to Wait for Hours: If you want a chance at a good viewing spot, you'll have to get to Times Square early. As in, like, now. Once you get there, you'll have to wait (most likely standing up) until midnight. In other words, this isn't for the faint of heart because…

4. You'll Definitely Want to Pee, Eat or Drink: While there are port-o-potties set up around the perimeter, the lines get ridiculously long. And don't think that you'll just drop by a restaurant and pretend to be a loyal customer. Most restaurants in the vicinity close early to prevent unwanted visitors. Plus, don't forget that once things get going, you won't be able to leave the enclosures at all. Think you have a strong bladder? Don't forget that it's only as strong as the coffee you'll be drinking to stay warm.

5. You'll Freeze: This one's pretty self explanatory, but I just thought it was important to remind you brave souls that it gets a lot colder at night, and it also gets a lot colder when you're standing around doing nothing. Bring gloves and wear extra pairs of socks! Extremities always get cold first!

6. You'll Get Lost: This isn't so much about getting lost in terms of NYC, but more so in terms of losing your group. Think about it: it's crazy crowded, everyone's wearing the same puffy warm coat, and every iPhone has the same friggin' ring tone, if you even hear it. Come up with a designated meet-up location to report to if someone gets lost, especially if you're bringing young siblings with you.

7. You Won't See a Thing: Because the die-hard spectators have probably already been looking for a prime locale since last Tuesday, chances are you won't find a good spot once you get there, even if you leave right now. This means you won't see much of anything besides the backs of peoples heads. The ball is A LOT smaller than in looks on TV, plus it's really far away, and high up. You're much better off watching from your couch.

8. It's REALLY Loud: I'm not talking cool rock concert loud–I'm talking putting your ear next to a locomotive loud. It gets intense. There was ringing in my ears for days after.

9. You'll Get Trampled: If you do survive the evening and last till the end, don't lose focus when it's time to go home. When the enclosures are finally open, everyone will try to make a mad dash at the exit, resulting in serious human traffic. You know how when a plane lands, and everyone jumps up and grabs their stuff out of the overhead, ready to run off before the plane even stops moving? Well it's like that but without the warm plane and comfy seats, and without the flight attendants around to make sure no one steps on each other.

10. The Illusion Will Be Destroyed Forever: This is more of a mental consequence than a physical one, but let me warn you that NYE at Times Square will never look the same way again. It's beautiful and glamorous on TV, and it's really best not to mess with that image of it. Or you'll be like that little kid in Disneyworld, crying because he just saw Mickey without his head on.