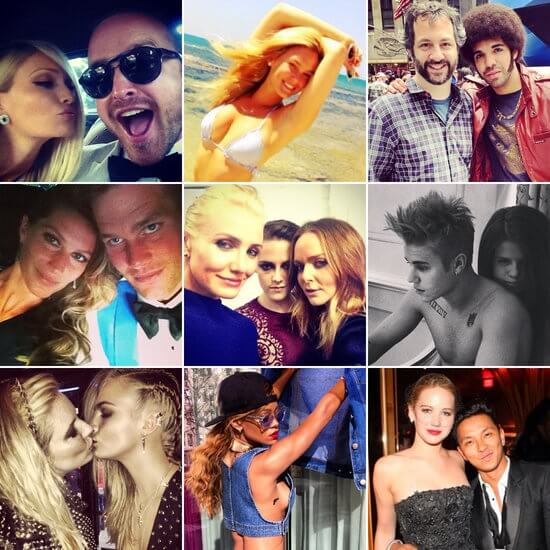 These days, users of the photo-sharing app Instagram can sneak a peek at Kim Kardashian’s breakfast, or check in on the first lady, Michelle Obama, where her personally posted photos are always signed “-mo.” If you’re hankering for a little more celeb on your Insta-feed, read on. We’ve lined up the top ten stars to follow on Instagram.

Not even Kim Kardashian can compete with Justin Bieber when it comes to Instagram followers. With 9.8 million in tow, Justin is one of the most followed celebs using Instagram. From pics of Justin’s performances to his shirtless selfies, one thing is clear: no cure has been found for “Bieber fever” just yet.

Kim Kardashian comes in at a close second on our list of the must-follow-on-Instagram celebs. With only .7 million fewer followers than the Biebs and an equally obnoxious amount of gorgeous selfies, Kardashian fans won’t regret making that blue button green.

Who wouldn’t want to know how billionaire and business mogul Oprah Winfrey spends her time now that she is officially retired? After many years of hosting The Oprah Winfrey Show, publishing magazines and simultaneously managing countless other business endeavors, it’s not likely that Oprah’s pace will slow anytime soon. Proving that she still enjoys an upbeat lifestyle, Oprah’s Instagrams include anything from silly pics of she and Tom Hanks clowning around to her surprise appearance on the morning talk show “Live! With Kelly and Michael.”

Known for her bold fashion sense, powerhouse voice and messy relationship with Chris Brown, Rihanna is one of the most intriguing celebs in Hollywood. With almost 9 million Instagram followers, fans clearly can’t get enough of this Barbadian bad girl.

Get ready to laugh, Instagram users! Chelsea Handler’s Instagram profile is about as silly as her E! Network late-night talk show. From shots of her “little nugget,” Chuy to backstage shenanigans, Handler bares it all for her followers.

Britney Spears has reportedly been making a “comeback” for some time now. Even with little observable progress, there’s still a place in our hearts for the former pop sensation’s catchphrase, “It’s Britney, bitch.” Instagrammers will likely get a feeling of nostalgia as they scroll through Brit’s #tbt posts from the days of “Oops I Did it Again” and “Hit Me Baby One More Time.”

Dakota Fanning is no longer the bite-size blonde actress we once knew. While she is still a generally petite, this 19-year-old celeb has grown into a beautiful young woman, complete with a boyfriend (gasp*). Check out Dakota’s Instagram for all her daily adventures.

For all you 1D fans, I had to do it. As for the rest of you, feel free to pretend this never happened. Girls of all ages cannot stop gushing about 19-year-old pop star Harry Styles;, and after a look into his Instagram posts, it’s not hard to imagine why. Good-looking, funny and fun, Harry’s Insta-followers can get their daily fix of the British heartthrob through his hilarious pics of life on the road as a member of One Direction.

Jesse Tyler’s Instagram bio reads: “Mitch on Modern Family, Activist, Red Head.” This description would seem pretty accurate if we didn’t know how much he is actually taking on. In addition to playing Mitch on Modern Family –and being noticeably redheaded– Tyler is recently married to his partner, Justin Mikita, has starred in Broadway shows and even graced the stage for New York City’s prestigious “Shakespeare in the Park” performance. By following Tyler on Instagram, fans of the multi-talented performer can get a behind-the-scenes look at his jam-packed life.

Calling all fashion, DIY and animal lovers! Lauren Conrad’s Insta-feed gives followers a fresh look on life, as she provides daily inspiration pics, silly shots of her pets and a look into her personal wardrobe! Now a New York Times best-selling author, fashion designer and TV presenter, Conrad is the ultimate entrepreneur and is known for empowering girls to follow their dreams.