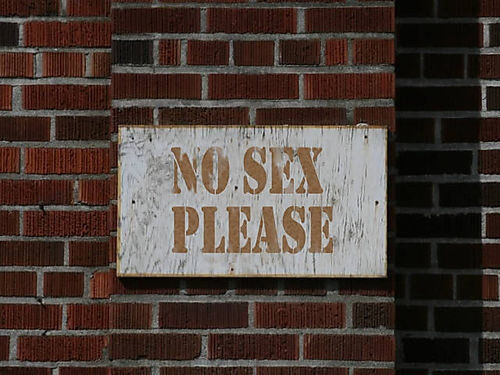 The 10 Most Prude Colleges

Another school year is starting and colleges around the country are once again full of intoxicated youth. Sunday mornings mark the regret of young men and women who hooked-up the night before and either cannot remember what they did, or do remember and are trying to forget. But there are some universities where sex is taboo and rarely discussed. Though sex is omnipresent in American society, sex education has always been a controversial issue even with the concerning statistics: nearly 25 percent of college students have or have had an STI and those between the age of 15 and 24 contract nearly half of all new STIs. Yet not all universities believe sexual health resources are relevant and do what they can to stifle their students’ carnal desires. Here is CM’s list for the 10 most prude colleges:

If there were "Thought Police" that could ban dirty minds, Bob Jones University would hire them. First off, pre-marital sex is prohibited and, of course, no contraception is allowed on campus. Homosexuality is also against the rules and an opinion article in the campus newspaper even asks people to “preserve society” by voting against gay rights and marriage. Other grounds for dismissal include using alcohol and drugs, gambling and viewing pornography. The school even prohibits students from having posters of celebrities and fashion models, and photos showing “immodesty or inappropriate physical contact” in their rooms. The university has a strict dress code and also ensures all its students stay wholesome by requiring chaperones at all events where there are mixed groups of men and women.

This Christian college tries everything in its power to make sure the students keep it in their pants. There is a pledge all students must sign every year promising they will not “engage in any illicit, unscriptural sexual acts,” among other things. Some of these unholy acts include sensual dancing and any homosexual activity. Since premarital sex is also a big no-no, there is no contraception available on campus or any sexual health resources. To further keep students’ hormones at bay, ORU has a strict dress code where both men and women are expected to “dress modestly,” and no one of the opposite sex is allowed in the dorms. Alcohol is also banned on campus and there is a curfew every night at 1:30 a.m.

Here it’s not about single girl swag; they just want to put a ring on it. Florencia Palmieri, a senior at BYU, explained,“Here people date to get married and some people date each other for only a few weeks or a couple of months before they decide to get married.” This nuptial rush may be partly due to the fact that all students must abstain from premarital sex since it violates the honor code they must sign every year. And it is a policy the university takes very seriously. “If a school or church leader finds out that you’ve had premarital sex, you go through a board meeting with all the deans and they decide what happens next,” Palmieri said. “Almost 100% of the time you are kicked out of school.” Also, members of the opposite sex are only permitted in the bedroom area of the dorms during designated “open houses,” during which room doors must remain open, and approval forms must be completed for all guests. If that isn’t staunch enough, women are required to keep their skirts at knee-length or longer and cannot wear form-fitting apparel, while men need special permission to grow a beard. Ironically, BYU’s student health center does give birth control prescriptions, but Trojan and Sperling’s Best Places ranked the college as one of the worst universities for on-campus sexual health services, which isn’t surprising considering the university doesn’t want its students to have sex.

At Pepperdine there is an expectation of sexual abstinence, which the college tries to facilitate by prohibiting its students from drinking alcohol. According to Jessica Cyrus, a graduate student at the university, sex is rarely discussed at all. “The sex topic is taboo here,” she explained. “There’s no mention of sex ever, unless you’re with really close friends off campus.” But despite this expectation of purity, the student health center can prescribe birth control pills and does offer STI screening to students. The center used to sell condoms as well, but Pepperdine’s board of directors decided such behavior conflicted with the school’s Christian mission. Its attitudes towards LGBT students are not necessarily liberal either. Homosexuality is not allowed at the university because it violates the school’s policy statement on sexual relationships, and the Princeton Review placed the school on its list of the “Most LGBT-Unfriendly Colleges.”

Hillsdale College has policies specifically designed to make students think twice about their sexual behavior. The student health center does not offer any form of contraception because the college’s mission statement forbids it, nor is there any sexual health information for students. But Mary Abide*, a senior at Hillsdale, said the college’s conservative atmosphere does not necessarily stop students from doing the dirty. “Just as anywhere else in the world, if people want to have sex, they’re going to do it, and no one is going to stop them,” she said. “However, I heard that RAs were told at the beginning of this year that they are now supposed to break up any sex in their dorms if they knew it is going on.” In further attempts to smother sexual behavior in the dorms, there are designated visitation hours for members of the opposite sex. Hillsdale also has strict social guidelines. Drinking games are not allowed and there must be party monitors present at all on-campus events to supervise. As for the LGBT community, students attempted to start a Gay Straight Alliance club in 2009, but it was banned. Also, after a public display of affection between a homosexual couple on campus, complaints from other students sparked a policy stating the college believes sexual intimacy belongs “in marriage and between the sexes.”

The most action anyone gets at this college is a tap on the behind after a football game. At Notre Dame students can be expelled for having premarital sex, so naturally contraception is banned and there are no sexual health resources. In fact, in a recent study Notre Dame was one of the bottom ten schools for sexual health awareness. The students are not informed about safer sex, and thus are more at risk for STIs and unintended pregnancies. But even if students find themselves wanting to have sex, the single gender dorms and strict visiting hours keep them at bay. There was even an article about how students don’t know how to interact with the opposite sex, so the university’s tactics to keep students from getting it on seem to be working.

Fordham is at odds with the sexually liberal atmosphere of the Big Apple. The university has strict rules about the dorms and the opposite sex which bans contraception, but students recently began protesting against the school’s anti-birth control policy. The university, however, stuck to its guns and students must now go to an off-campus clinic for birth control. Emily Wolf, a member of the Fordham chapter of Law Students for Reproductive Justice, said the clinic has been successful with giving women the prescriptions they need. “Condoms are not allowed to be distributed to undergraduates, and that combined with the lack of birth control prescriptions creates a conservative campus environment,” said Wolf. “This could be dangerous for students who are not aware of where else they can turn to get information or contraception they need.” The university also tries to control students’ consumption of alcohol. Though it is not a dry campus, if students wish to host a party, they must register the event at least a week in advance to get it approved by the school.

While this Catholic university may be one of the top five schools in the “Great Schools, Great Prices” category, it definitely isn’t so great when it comes to sex. No sexual health resources or contraception is available on campus, and the majority of the residence halls are single gender. There is even a rule that visiting students and guests of the opposite sex must sign a guest log so security guards can ensure all visitors leave the dorms before curfew. Providence College also deemed The Vagina Monologues as “not appropriate” and banned the play from being performed on school property. “The school believes sex is for only procreation, not recreation,” said junior Lauren Busby. “It is fairly conservative when it comes to sex, though there are no enforced policies about premarital sex. One of the rules PC students hate is the parietals rule. It makes it hard to hang out with a mixed friend group of guys and girls in the dorms.”

There’s no flashing for beads going on here. Located along the “Bible Belt” in rural Ruston, Louisiana Tech isn’t known for being sexy. Trojan and Sperling’s Best Places ranked this university as one of the least sexually healthy colleges, which isn’t surprising considering the lack of access to information about sexual health on campus. Also, none of the dorms are coed and there is a strict visitation policy where any members of the opposite sex are only allowed in the dorms during certain hours. Men are not allowed in the women’s dorm rooms after midnight, and the RA’s do random room checks to make sure none are hiding under the bed. “Tech is one of the few colleges that I would say still has a religious atmosphere about it,” said junior Abby Einsohn. “Ruston itself is a strongly conservative Christian community, so naturally the university is also going to be more conservative when it comes to sex. In the dorms they are really hard core about opposite sex visiting hours and they will not tolerate any drinking.” Did she say hardcore?

Check out our ranking of the 10 Most LGBT Friendly Universities.