When I got to Boston College for orientation, welcome week and for most of my freshmen year, people asked the same question over and over again.

You’re from Florida? Why did you come here?

For a while, I didn’t really have an answer. Why did I come all the way from sunny Winter Park to the land of ice and cold? I’ve thought more about it in recent months, trying to determine what about Boston College appealed to me. What life would have been like if I had chosen a different school?

But let’s start from the beginning—as good a place to start as any. During my junior year of high school, my parents decided that I needed to start looking around at colleges. I felt pretty sure I didn’t want to go to any schools in Florida. I wanted to go somewhere new. Looking back, I can’t really figure out why I opposed colleges closer to home. But that’s just life as a confused teenager.

Our first college trip landed on the four-day weekend for President’s Day in February 2015. My dad suggested that we go to Boston because, as you know if you’ve ever been here, you can’t walk 100 feet without running into a college or university.

As our luck, or perhaps misfortune, would have it, we picked the weekend of an enormous blizzard. Ask any Bostonian about that one, they’ll remember it. Record snowfall, bitter cold, wind, flights grounded, roads closed, you name it. And this marked my first impression for the four schools we toured that weekend.

First on the list: Boston College. It was, of course, absolutely freezing on our campus tour. Born and raised in Central Florida, anything lower than 70 degrees called for a sweater and jeans. Anything lower than 30 degrees counted as a state-wide emergency.

Trudging through the snow in an ill-fitting ski jacket, boots that weren’t broken in yet and my thickest pair of jeans didn’t seem to add up to the makings for a great college experience. But the tour and the school still impressed me—it looks beautiful even when covered in snow. Boston College fit me academically as well, hence why I looked at it in the first place. Every student my dad embarrassed me by talking to also seemed to love the school. We left campus that day chilled to the bone, but glad that we could add a potential school to my list.

Later in the trip, we also toured Boston University and Northeastern University. But those campuses just didn’t click with me. I wasn’t really feeling much of anything to begin with—the temperature managed to drop even lower than before. We also toured Harvard. Let me be clear, I could never get into Harvard. I didn’t even apply. But with our flight grounded, we found ourselves stuck in Boston. Might as well, we thought—it’s Harvard after all.

Later that year, my dad and I took another trip to all of the “Southern Ivy Leagues.” We decided to do this as a road trip. This meant that my dad got to drive our rental car for hours every day while I sat in the passenger seat and watched movies. We toured Emory University, Vanderbilt University, Duke University, Wake Forest, UNC Chapel Hill and Davidson College. By the end of the trip, I added a few more schools to my list.

I sent out applications throughout senior year to most of those schools, some reaches, some competitive and some safety. Then I sat back and waited. By the time my acceptances and rejections came in the mail, I whittled my choices down to two schools: Wake Forest and Boston College. I later learned that about 40 other people at Boston College made the same decision between those two schools. Both schools were about the same academically, and I enjoyed both of those visits immensely.

The decision was tough. I made list after list of pros and cons, but I didn’t really get anywhere. My parents offered to take me back to Boston College so I could see the city when it wasn’t covered in five feet of snow. I saw Wake Forest in the spring, and in the summer and it was abundantly clear that it’s a beautiful campus outside Winston Salem, North Carolina.

Although it snows a lot in Boston, I thought it would help a lot to see the school at a time when it wasn’t. At this point, if you made me choose a school, I would probably chose Boston College just because it sat so close to the amazing and interesting city of Boston.

As soon as I stepped back on campus for the second time in my life, I knew it was the right pick. I felt overwhelmed with a sense of happiness and peace. We walked around campus, seeing people hanging out with their friends on the grass. It just seemed like this is what college should look like.

That same weekend, I committed to Boston College.

Now starting my junior year, I can’t imagine going anywhere else. I love the people I met here, the clubs I’m a part of, the things I do and study—I love everything about Boston College. I wouldn’t change schools, and I’m sad that I only get two more years here.

But I think I would feel the exact same way if I attended a different university. I would love my friends there, I would enjoy being a part of the clubs at that campus, my classes and everything else. My philosophy on college is this: A college is what you make of it.

Plus, even if I had hated the school I went to the first time, I could always transfer and try again. Some of my best friends at Boston College are transfer students.

I’m happy at Boston College because Boston College is a school that has a lot of the characteristics that I looked for in a college. It’s a great fit for a lot of people, but it would be a terrible fit for a lot more. You must to choose the college that works for you and your situation, not the one you think you should go to.

But it’s a two-way street—don’t expect the school to do all the work. Get out there and make the most of it. 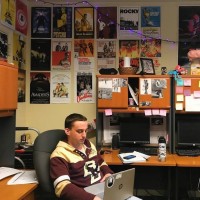 Jacob is a junior at Boston College, hailing all the way from sunny Winter Park, Florida. He is studying English, philosophy and journalism, and is also on a mission to watch every movie ever made (he's keeping a list and it's pretty close).

My Garbage Radio Show Is the Best Part of My Week
Next Post: LAST DAY to Enter to Win a $1,099 Wolf Scooter of Your Choice!