You are here: Home / Campus life / When Your Roommate Blocks You On All Social Media Accounts

At the end of freshman year, I took a look around my room one last time. I couldn’t help but laugh. So much happened over the months I spent in this room and the first thing that popped into my head? “I pray for the Class of ’22!”

College never fails at being a weird place: one moment you find yourself happy next you become overwhelmed with depression. And what’s worse than all of your teachers giving you tons of assignments all due at once? Having to go back to your room to a roommate being super passive aggressive, trying to be slick and making you uncomfortable in your own space.

At the beginning of school, life was awesome—little assignments to complete, Boston’s pleasant weather during the fall and everyone still gazing around for “their” specific group. At first, things went smoothly with my three other roommates who I shared a quad with, the only quad on our entire floor. Most of our friends would come to hang out and chill in our large space. Sometimes, we went out together and of course, stayed up really late having mini parties in our own space.

But the fun took a turn when the roommate agreement was not taken seriously.

Instead of sitting down and actually being honest with one another about cleaning schedules, lights out policies or our comfortability with other people in the room, we just shrugged our shoulders like clueless freshmen thinking that somehow a room of four girls can live together with no drama whatsoever.

More red flags started to arise when I noticed that my one roommate was always isolating herself. One day, things got really bad. I asked her to clean and the response I got was super petty and resulted in her gossiping over the phone about me. This response irritated me because I felt that I was mature and respectful when I asked her to take out the trash or vacuum.

I don’t know about you, but I was raised in a household where we took chores seriously. After a long period of being fed up with the passive aggression and childlike behavior (subbing me on social media) all because of tidiness, I vented to my RA/RD and friends, and decided to call a room meeting with the help of my other two roommates.

During the room meeting, I noticed that my roommate was really not cooperating at all, and I still remained hopeful thinking that she’d eventually come around and cut the drama. But I was wrong. After asking numerous times to see how we can resolve the issue, and calling her out on the fact that she was subbing me on social media, I then found out that she blocked me on all of her accounts.

L-O-L! Right? I found that really funny. Despite all of this, I still wished that my roommate situation was perfect like some of my other friends. I did my best to communicate and put myself in other people’s shoes. I was content in knowing that I at least tried. Regardless of our arguments, my school year ended so beautifully when my roommate and I began to put the past behind us, analyzed my real friends by my side and finally realized that you can never change a person unless they want to make that change on their own. 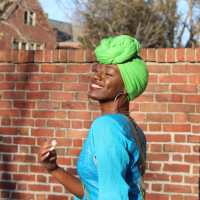 Fatoumata Sall is a sophomore at Boston College pursuing her bachelor's degree in Communications and Marketing. She is always eager about influencing others to use their voice and make a change in their communities.
"You can’t force a star into a box” - Mata Binta

How to Answer Common Interview Questions to Slay Your Job Interview
Next Post: Do You Really Want to Be an English Major? And Other Things Better Left Unsaid to a Smith College English Major