You are here: Home / Campus life / My Warpath To Find My Seminole Pride

After 15 years of being surrounded by my closest friends and family in South Florida, I had grown accustomed to a certain degree of familiarity. When August before my freshman year rolled around, I realized I had been in denial about leaving behind the comfort of my home and the idea of independence terrified me. It certainly didn’t help that out of all my friends, I was the only one attending Florida State University. Truth be told, FSU had been a backup school and I had no intention of going when I submitted my application. Because my family wanted me to follow in my sister’s footsteps at the University of Florida, my future had been predetermined up to this point. The gator chomp just wasn’t in the cards for me.

All my hometown friends got into universities hundreds of miles away, leaving me far behind. During orientation, I walked around the 475-acre university feeling simultaneously like the kid from Home Alone and Alison the outcast from The Breakfast Club. Everyone glimmered with Seminole pride, while I was still questioning if I had made the right decision. The freshmen around me immediately split off into cliques; a concept that I figured would cease to exist in the college social circle. It was as if I was living Mean Girls, right down to the plastics, sexually active band geeks and desperate wannabees.

To make matters worse, I made the poor decision to live alone off campus, so meeting other freshmen proved extra challenging with no RA to plan trips to the Student Life Cinema or dorm decorating contests. Classes were fast paced and the weeks slipped by even faster. I checked in with my old high school friends only to learn that they made new groups of friends in college and felt “right at home.” They urged me to get out there, join clubs and meet new people as if it was as easy as making Annie’s white cheddar mac and cheese (heaven).

Towards the end of my first semester, I decided it was time to step out of my bubble and my first step would be attending a stand-up comedy show at Club Downunder. At the end of the show, I walked over to commend one of the performers on his act. I quickly figured out I wasn’t the only one with this idea; the performer was surrounded by one of his friends and a group of four girls. We all immediately jumped into a conversation about the hilarious routines from the night and suggested exchanging phone numbers. The performer: into it. The performer’s friend: less than enthusiastic, claiming that he didn’t have a cellphone and would email us to continue our conversation.

When the guys left, we all laughed at his feeble ploy to blow us off, and exchanged stories over failed relationships and cheesy pick up lines. After that night, we became an inseparable clique of five uniquely kickass personalities. Whether we obsessed over cinematic masterpieces like Sharknado, piled into a canoe at The Rez or had twelve-hour hair dying parties, there was never a dull moment.

Together we decided to apply for Lady Spirithunters, an organization with the purpose to spread spirit and tradition at Florida State University. Ever see those snazzy girls sporting garnet and gold vests and painting war stripes? Those are Lady Spirithunters. The reason I wanted to join was simple: I wanted a place to feel at home, people to call my family and an organization that would get me more involved around campus. In my interview, I wowed the crowd with my quirky abilities to sing in Italian and speak Russian. Because I stood out from the crowd, the Lady Spirithunters welcomed me with open arms.

With the help of the Lady Spirithunters, my experience at Florida State has been far from normal. I escorted Jameis Winston’s parents on the field of Doak Campell Stadium while the football team practiced, ushered the skyboxes and even went to North Carolina for the North Carolina State University game, where FSU managed to come out on top in the fourth quarter and beat NC State (56-41). The crowd booed the Seminoles, continuously claiming that we were supporting the wrong team and should just go home. But we just sang the war chant louder to encourage our team to victory while those who had taunted us shuffled down the bleachers, heads hung low in disappointment.

Lady Spirithunters unconditionally support their team and each other. I have gained a family of my own all while upholding the spirit of the garnet and gold. Whether zip lining through forests in North Carolina or rapping Nicki Minaj’s “Super Bass” at group sleepovers, every moment has been a new adventure.

Lady Spirithunters helped bring out my war stripes. And they look fabulous on me, if I do say so myself. 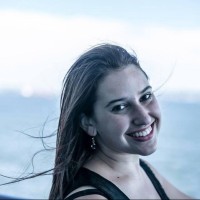 Sasha is a senior at FSU studying editing, writing and media with a minor in business. She enjoys binge watching Merlin on Netflix, photography, and cuddling with her dog.

CM’s Guide to the Food Science Major
Next Post: A Survival Guide for Roommates from Hell