You are here: Home / Life / So You Wanna Be an English Major?

You’ve had that final, irrevocable “let’s decide your future” chat with your academic advisor. You threw down your copy of The Great Gatsby in exasperation and roared, “I’m gonna study English literature!” Your parents hung their heads however many miles or minutes away and mumbled, “At least he can still go to law school…”

So, now that you have ten toes into the honorable trade, here are some things you’ll want to know.

An English degree will appear on your diploma as a Bachelor of Arts. But what you’ll really need to have a successful career as an English major is a B.S. (a bullshit degree, get it?). You simply won’t have time to do all the reading for all your English classes. Yeah, it’ll seem like you have all day to read a hundred pages of Let the Great World Spin. Then you realize you don’t have any clean clothes. And your buddy asks if you want to watch The Dark Knight. And your inbox was breached with 20 unread emails in the last hour. That breezy but most likely uncomfortable October Thursday you thought you’d spend reading one of the great 20th century novels just slips away. The unofficial moto of English majors is read when you can. They’ll understand.

2. Drink Twice as Much Water as Coffee.

Because we’re all English majors at heart–if not in reality (by reality, I mean a literal reality, not the fickle “reality” those … philosophilogians glide through )–if you drink one cup of coffee, drink two cups of water. This is by no means “officially” “scientifically” proven, but if you’re drinking more water than coffee, it will keep your fingers, toes and id from shaking (probably) as the coursing caffeine gives life to your uninspired veins. If you keep drinking coffee without that vital H20, you’re in for a (short) night of coffee dreams, which are almost as bad as fever dreams.

You’re telling me I have to make another life-altering decision already? First comes major, then comes specialty, then comes a baby in a baby carriage? Settle down. This will only make your life easier. You want to choose a specialty—like feminism, visual culture or comic books. Yes, I  write 79 of my English papers on comic books. The day will come when a professor will ask you to turn in an eight-page paper in two weeks. You don’t have time to delve into the complex minutia of a particular subject or build an interpretive plan. Find a section of the library (the big thing with the books) you find interesting (shout out to the PN67s) and keep going back, over and over again. No one will be the wiser…except you, hopefully.

4. Talk to Your Professors. Some of Them Actually Care.

Way back when I was a second-semester freshman, I took a general lit core class. I had just declared an English major but didn’t love the class and I expressed that to Professor Smith (which is his actual name, I’m not you). I put forth a less-than-exemplary effort down the road and in our final post-mortem “what did Ryan do wrong in his last essay?” meeting during exams, he basically told me that I could a lot better, but to stop by his office any time. This is usually the part in the story when I lift off on a life-changing relationship, but that’s not exactly what happened. I never “stopped by” in any meaningful fashion. We saw each other in the sprawling English office, exchanged some pleasantries and went on our ways. I think I really missed out because most professors actually care about you and, like, kind of want to be your friend.

Your friends who major in economics, accounting, finance or pre-(insert profession here) will occasionally, playfully (hopefully) tease you. “So, you want to be a teacher?” or the overdone “How’s the great American novel coming?” And that’s fine. You can always throw back, “Accounting is just counting!” Can I trademark that? Cross-discipline jabs aside, your major doesn’t really matter. Unless you’re heading down a pre-professional track like nursing,  your major ain’t gonna get in the way of getting a job. You chose English because that’s what most excites and frustrates you and it’s what you think you’re still getting better at. You pick up an old book and you see more in it than you did a few years ago.

If you’re studying English, you’re basically studying how narrative works–how we talk to each other and how stories are shaped in the public forum as well as the enlightened caves of “important” writers. That’s a really cool thing. And it’s a worthy thing. 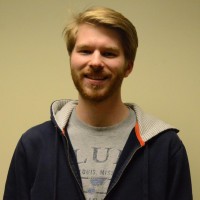 Ryan's a senior English major at Boston College. He likes talking about superheroes, baseball, and bratwurst.

Yes, I Live in a Single. No, There’s Nothing Wrong with Me.
Next Post: The Moment I Realized I Hated UF, School of Disaster and Disillusionment