With the price of avocados at an all-time high, could you blame me for being upset with the person who threw them away? From my freshman year to my junior year, issues always surrounded the people I lived with. Starting with my first roommate ever, to spending a semester in Barcelona, I encounter the worst luck regarding roommates. I found myself constantly complaining about their lack of cleanliness or their inability to keep their hands off my stuff. I would ask myself, “Did your parents teach you any manners?” as I watched them get up from the table and leave their dirty dishes in the sink where they would sit untouched for days. I certainly was not raised that way.

I recall my freshman year roommate staying awake until the crack of dawn working on homework with the lights on while I would be sleeping, or attempting to sleep. Sophomore year, one of my four roommates threw out my precious avocados. She felt they were rotten—despite the fact I just bought them. Alright, fine, maybe they were a little brown, but how rude.

The torture doesn’t stop there. I even studied abroad in Barcelona the last semester of my junior year for a possible escape. Across the pond, my roommates tormented me. My food went missing on almost a daily basis. Granted, my pantry only consisted of grilled chicken and crackers, but the food always managed to disappear.

By the end of each year, I built up so much anger inside of me that I began to resent the person I chose to live with, someone I had considered a friend. The idea that I might be the problem never once occurred to me. The idea just wasn’t plausible.

I am the perfect roommate. I never do anything wrong.

Thinking back, I can’t recall a single time I portrayed the stereotypical bad roommate. Except the one time three of my high school friends visited me my freshman year. I allowed them to pass out in my roommate’s bed…without her permission. Oh, and the time I shared a room with a friend my sophomore year, I left out a used, coffee cup with creamer for a month, which in turn produced mold all over the cup. And don’t forget the time I technically let my boyfriend become the third roommate during my junior year. Or the entire spring semester I spent in Spain when I, essentially, did everything that embodies the characteristics of a horrible roommate.

Okay, so maybe I wasn’t the perfect roommate. Alright, fine, maybe I was one of the most selfish, irresponsible, immature and disgusting roommates on the planet. I was just too blind to notice my shortcomings. I spent all my time and energy getting angry at my roommates for their flaws and imperfections, when all I had to do was look in the full-length, skinny mirror I took from my roommate and forgot to give back.

As I start my senior year, I am taking steps in the right direction to ensure that not only do I refrain from blaming my roommates for dirty dishes in the sink and overflowing trash bins, but I am also making an effort to be a better roommate as well. In fact, I’m doing very well thus far. I only let four days pass by before I picked up and cleaned the three-day old bowl of beans I left in my roommate’s room. And I only took two weeks before I remembered to return my other roommate’s favorite sweatshirt to her. 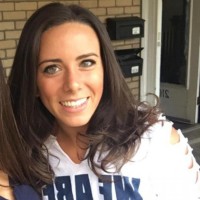 10 Tips to Make Your Dorm Cozy AF
Next Post: 10 DIY Crafts for a Mid-Semester Makeover