You are here: Home / Campus life / Top 10 Places to Pretend Like You’re Studying at Boston University

We’ve all been there: you don’t feel like working on any of the four papers or three group projects you have due this week, but you want to trick those around you into thinking you’re more studious than you actually are.

In these Boston University spots, you’ll always have the upper hand. Others may think you’re studying or applying for yet another internship when you already have three Netflix episodes under your belt.

So sit back at your favorite ‘study’ spot and enjoy this list while you’re putting off that essay because, let’s be honest, you can get it done tomorrow.

Check out some of the best BU spots that’ll at least make you look productive.

The green space in front of the College of Communication—COM Lawn—is the dream of any procrastinating student. There are plenty of seating options: you can post up by a tree, pick one of the red mesh-iron tables, snatch a stone bench or sit right on the grass (whenever the weather allows). There’s WiFi, as shaky as it is, and it’s right on Comm Ave. So, everyone walking by will be sure to see you playing the part of the overworked college student, regardless of what you’re actually doing on COM Lawn.

The view from the top floor of Student Village 2 is so good that BU Admissions uses it as a selling point to prospective students. There, on top of the world, you see Cambridge and all its growing communities to your left and downtown Boston to your right, with the Charles River serving as the border between the townships. “You go up there with the intention of studying, but then you get distracted by the great view of Boston,” sophomore Chris Larabee said. This isn’t to say that you can’t get work done here, but it’s understood that everyone’s just there for the view.

There are six Starbucks within the one-mile stretch of Commonwealth Avenue that BU calls home. That said, the Starbucks in the Questrom School of Business is in a league all its own. For starters, it’s in Questrom, which is already intimidating. Every time I walk into that building, I immediately feel inadequate. There are students there who have already made more money than I will in my whole life. On top of that, the Questrom Starbucks has the highest rate of traffic per square foot of any Starbucks in the world. So, if you want to be seen looking like you’re a hotshot business student who, like, needs their coffee, this is the perfect place for you.

On the first floor of CAS, there are benches all throughout the one long hallway. Not only are you sure to be seen as you’re holed up on the bench, but they’re surprisingly comfortable for being made of wood (or whatever the walls are made of). “I’m on the weird, incorporated-into-the-wall benches in CAS with my leg up, laptop open because everyone can see you, so they think you’re up to something,” junior Hannah Cuthbert said. Because you’re in an academic building, people will assume you’re rushing to finish your homework before class. What they can’t see? You’re really playing Cool Math Games and trying to relive your childhood.

I’ve talked a lot about places where you’re sure to be seen, but the busiest of them all is the George Sherman Union. It’s right in the middle of campus, and it’s the “Greenest Food Court in the Nation” (as decided by the Green Restaurant Association). Be prepared to see a lot of busy, hungry Terriers running around at all hours. One of the most popular restaurants in the food court is Rhett’s, which is BU’s mascot-themed diner. “You pretend to study while you wait for your Rhett’s buzzer to go off,” junior Nate McKay said. Rhett’s is notoriously slow, which gives you plenty of time to get noticed looking busy at the barstools or in the booths.

It’s picturesque – the largest grassy space on campus. There are student-created art pieces, the Charles River flowing whichever direction it feels like and lawn space galore. It’s the closest thing BU has to a “quad,” which means it’s a great place to put on the façade of the hard-working college student. “Not one person has ever written a paper there, I guarantee it,” sophomore Rebecca Martin said. Just lean against a tree and pull out your laptop or a notebook; everyone will think you’re hard at work, and you’ll get to pretend that you’re some “artsy” student from every school’s brochure.

The second floor of the Mugar Memorial Library is the perfect storm of distractions. One half is a balcony overlooking the first floor where you’ll hear loud tour groups and see all of the glass cases of the archives. The other half has some of the biggest tables I’ve ever seen, and they’re always full, making it a great place to people watch. “I like Mugar. It’s easier to slack off in a place where a lot of people are ‘studying,’ I think,” sophomore Jun Mai said. It’s a very conspicuous location, so a lot of people will see you pretending to get work done, just as intended.

One of my favorite parts about BU is the two late-night dining options in Central and East Campus. Bay State Underground was renovated just last summer, and now the vibe is something like 1920s speakeasy meets 2000s coffee shop meets 2010s sushi bar. The menu is great, but like Warren Late Nite, the ratio of students to electrical outlets is far too low. You’ll often hear people say “I’m going to Late Nite to do work,” (I’d be lying if I said I wasn’t one of those people), but we all know that’s code for “I could really go for a crispy chicken wrap, but I’ll open my laptop so people think I’m being productive.”

The CAS Think Tank was built over the summer of 2017, making it one of the newer spaces on this list. While it was explicitly meant to be a place for students to study, it’s become synonymous with Netflix. There are phone charging stations, nearly soundproof study rooms and some of the most comfortable couches and chairs on campus. Throw in the glass walls separating everything, and the Think Tank becomes a zoo exhibit of procrastination.

The Astronomy Library is one of 20+ physical libraries on campus, but it’s the only one attached to an observatory. Located on the sixth floor of the College of Arts and Sciences (CAS), not only can you potentially get a great view of the stars if you’re there late enough, but the place is empty. Most people don’t know it even exists. “No one goes there, so it’s a great place to nap without leaving CAS. I nap there when I’m too lazy to walk to Mugar,” freshman Megan Romine said. Any library is a good place to pretend to study, but when one is known for being a prime napping spot, it’s prime real estate.

Of course, there are plenty of other great places at BU to go if you’re trying to give the appearance of someone who cares about their schoolwork. And I’m sure there are some genuinely good study spots too, but as we all know, appearing to be productive is far more important than actually completing your assignments. 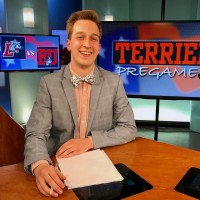 I am a sophomore at Boston University studying journalism and sociology. When I'm not broadcasting or writing about BU basketball and hockey, you can find me chasing for BU Quidditch; playing or listening to jazz; or rooting for every sports team from St. Louis and Memphis.