You are here: Home / Campus life / There’s Nothing Like It: Unique UW-Madison Experiences

Madison, aka Badger Nation: The land of the second Red Sea that rises hours before Saturday kickoff. A city that knows the burn of the sun and the sting of frostbite in the same week and a student body that is as politically active as it is athletically dominant. This is Madison.

Of course every new Madison resident builds anticipation for his first Jump Around experience, but what about other football traditions or campus experiences? As an ode to the lesser known attractions available at UW, check out some experiences you won’t want to miss.

Everyone knows and appreciates the legendary Jump Around that rattles campus for a whole minute and a half. Even opposing teams join the fun, but only Wisconsin students and fans understand the excitement of the historical Badger Football video. Stars scoring, making big plays and bringing home championship titles send the student section into a frenzy right before the team storms the field. If you want to experience it, take heed of athletic director Barry Alvarez’s words: “Better get season tickets now because before long you won’t be able to.”

Whether enjoying a pitcher of your favorite beer with a group of friends or sampling local music artists, the Memorial Terrace is the place to be. Located right on Lake Mendota, the abundance of seating and portions of green space offer a wonderful place to have fun with good company. If you’d rather avoid the outdoors, the Rathskeller (located inside Memorial Union) houses a restaurant to grab a juicy burger and fries. In other words, Memorial Union is the perfect place for everyone.

Have you ever tasted a mint, iced, Oreo-crumbed, cream-filled donut? No? Then please, for the love of all things unhealthy, run to Greenbush Bakery on Regent Street. Not only does Greenbush offer wild donuts like the Oreo and fruity pebble covered glories, every donut cost $1. That’s it. So the next time you have the midnight munchies, rush over to grab the best donuts in town and maybe even the universe.

While I’ve got your stomach’s attention, let me tell you that every Madison resident must eat at Mickies Dairy Bar. Home of the Scrambler (a hearty mix of eggs and hash browns), Mickies serves the tastiest breakfast food with the portions to match. With options like an inch-thick stack of chocolate chip pancakes and the classic eggs and bacon, you’ll find the perfect meal. Tucked away right behind Camp Randall on Monroe Street, Mickies Dairy Bar is the go-to place for the breakfast of a lifetime.

Halloween’s claim to fame in Madison rests with Freakfest. Between dressing up as the latest pop culture icon and listening to live music, Freakfest adds up to a ton of fun for local residents. Students can strut their stuff in the cleverest costumes they can devise while jamming out to DJ’s and local performing artists. Freakfest is a great chance to take new or existing friends out on the town for a good time; just make sure you remember which Ninja Turtle you came with.

Yes, it’s as intense as it sounds. Every year when Madison receives its first major dousing of snow (which usually comes around August), the residents of Lakeshore fight the members of Southeast in an epic snowball fight. Mobs of students take to Bascom hill to fire snow at each other for the sake of sport. If you plan on joining this year, make sure you remember your goggles from chemistry because Badgers don’t mess around.

Madison is a great place for music. Supporting the local music scene benefits everyone, especially you as the listener. To catch some of the big name acts, make your way to the Orpheum on State Street. With Ratatat, Young the Giant and Rise Against as some of this year’s artists, the Orpheum offers a fun place to jam out with a close proximity to boot.

The Sett on Game Day and Music Weekends

Located at Union South in the middle of campus, the Sett has a large viewing screen and open space for packing in the crowds. If the apartment mess hasn’t changed from the night before, head on over to the Sett to watch the game. Like the Rathskeller, the Sett also offers great food. You can smell the freshly made cheese curds and Bucky Burgers all the way from the lobby outside. On Saturday mornings the UW Marching Band holds its pre-game pep rally right outside the Sett doors. You’ll be in for a treat as “On Wisconsin” blares outside to hype you up for kickoff. 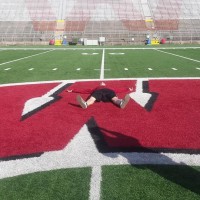 How to Go Greek Without Losing Your Independent Friends
Next Post: Friendless and Bored: An Internship Story