You are here: Home / Life / The Growing Pains of Adulting

Ouch! Sharp pain filled my legs. My nine-year-old self lay in bed with throbbing muscles, like they were pulling themselves apart. These aches would last for days. But my mom assured me that this feeling affects most people—growing pains. By the time fifth grade started, I grew dramatically, but this growth eventually went beyond the physical.

At 18, I started going to Westmont College in Santa Barbara, CA, two hours north of home. Going home felt like a luxury and visits from friends rarely happened. I got tired of never seeing my boyfriend, but dating him held me back from growing.

Three months into freshman year, I mustered up the courage to end our relationship. Our break-up created friction in my group of friends and people decided to take sides—mostly his side. Friends stopped texting me as much, and when I went back home for the holidays, my friend group had shrunk. If growing up meant losing your childhood friends, then adulthood must suck. I felt like getting on board with Peter Pan and flying away to Neverland.

Then finances hit me in the face. Unfortunately, a fairy didn’t whisk me away to the second star on the right. Freshman year was over with and I received a letter that the already expensive private college tuition was going up even more. I already had one gigantic student loan to pay back and worried about the debt I would accumulate if I stayed until my senior year. So instead of going back to Westmont, I took a semester off and worked two jobs. So much for finishing college in four years.

Friends plastered my Facebook newsfeed with photos of parties, events and outings at their schools, and there I was experiencing an awful growth spurt. Back in my hometown without any friends, working two jobs I hated, living in a cycle of monotony. I didn’t get to go to homecoming games, rallies or dorm hall parties.

Life doesn’t always go as planned—my second lesson from adulthood. This did not fly very well with my perfectionist self. I was practically born with a set plan in mind, and like the Fresh Prince of Bel Air said, “my life got flip-turned upside down.”

Eventually I eased into my new life. New friendships developed in the classroom and at work. My time became more flexible because I took night and weekend classes, and didn’t have to live on campus. I finally felt truly independent.

My new friends and I spent a lot of time exploring downtown L.A., hitting up coffee shops and beaching it. I even joined the debate team at the persuasion of my professor. Turns out I kicked ass at competitions and won some medals. Once I accepted my new life and stepped out of my comfort zone, amazing things happened and I became more self sufficient. But the latter really kicked in once my mom moved to Florida.

Another growing pain. I didn’t think her move would affect me much, but without her I felt lost and lonely. She had been guide and fortress for 20 years and now I was left to figure out life on my own.

I didn’t do anything crazy when she left. She taught me how to keep my head on my shoulders, but I did have to remind myself of my responsibilities. Some weekdays I’d decide to stay out ridiculously late, which resulted in waking up in sweat and panic, realizing I had about 15 minutes to make it to work. I even missed her walking into my room yelling at me to wake up.

Yet I remembered her lessons on prioritizing and time management. I found that I was capable of doing a lot without her direct help. I successfully filed taxes, managed scheduling doctor and dentist appointments, planning out of state trips, not forgetting anything when leaving the house or locking myself out of the house (which happened way too much beforehand).

A year later, I moved my life to Florida, but not to follow my mom. I needed to transfer out of my community college, and for my financial capabilities, Florida was a lot more affordable than California. My mom lives three hours south from me now. She lives close enough to visit twice a month but also far enough that I don’t grow too dependent on her again.

Since I’ve been out here, I learned how to budget myself even more. I pay rent, buy groceries and take care of other day-to-day expenses. Just apartment hunting was a huge task on its own. I learned how to live on my own and how to choose my values—deciding whether I should stay out late and party or go home early, if I should buy groceries or that really cute shirt.

Adulting is pretty much about learning how to make the wise decisions on your own and not depending on your parents to do it all for you. Going to college and working sped up this process because they both forced me to cut ties with childhood and face the realities of life. I know I’ll always have my parents to fall back on, but for now I’m doing a pretty good job at growing up. 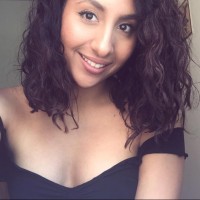 Lizzette is a junior transfer attending the University of Florida and is originally from Los Angeles. She loves the hustle and bustle of big cities, coffee, art, books and collecting mugs along with other random items.

Five Best Spots to Get Lit at American University Frat Formals
Next Post: That Awkward Moment When You Realize You’re a “College Person”