You are here: Home / Life / Health / Hooking Up / The Etiquette of Sexiling

Not every student who comes to college is looking for love, but there are students looking for one-night stands. College students, more than anyone else, seem to be experts on the art of sexiling, or kicking roommates out to have sex in their rooms.

“In freshman year, my friend had a roommate who kicked her out for over 48 hours,” said Lauren Farahani, a sophomore at New York University. “My friend literally had to carry her mattress out into the common room and change, eat and sleep in the common room the entire weekend. And there were all sorts of crazy noises coming from her room.”

For the fortunate students (usually upper classmen) who live in apartment-style dorms, sexiling is not an issue because they have other places to sleep. College suites give students another place to go when their room in unavailable.

“It’s never been a huge issue for me because I can just leave the room and sleep on the couch in the suite common room,” said Gabrielle A., a sophomore at Boston College.

But for the unlucky students who live in traditional two-person dorms, sexiling can become a major problem. Tensions arise especially when roommates aren’t good friends and the conversation about getting kicked out for the night can be somewhat awkward.

Every college or university has resident advisors (RAs) or designated people who deal with resident problems, but shy underclassmen and sometimes even Juniors and Seniors  might not feel comfortable sharing their sexiling problems with them. And why would they? Asking an RA for help in this department can sometimes seem a little like asking them to regulate your roommate’s sex life. That will most likely leave you feeling uncomfortable, your RA feeling intrusive and your roommate feeling betrayed.

“I’ve never had residents come to me with [sexiling] problems but I don’t think people really want to go to RAs with that,” said Jordan Stern, a former RA at Binghamton University. “I know what’s going on but most people kind of let it go.”

So going forth into your sexiling situation without an RA’s help can be a little daunting. To ease the situation and make both you and your roommate feel satisfied, here’s some advice and guidelines of proper sexiling etiquette.

Ready to get sexiled? Here’s how to do it with some manners.

If you want to stay in your room for the night, don’t be afraid to tell your roommate that she needs to take her activities elsewhere. If you’re on the other side of it, make sure to tell your roommate ahead of time that you’re planning to use the room that night so he or she can make other arrangements.

Although it’s almost always annoying to get kicked out of your room, you have to remember that the room also belongs to your roommate. Be open to giving your roommate some time in the room on weekends or days when you don’t need to be up early.

If there are specific days when you need to wake up early or go to bed early, tell your roommate. Let them know that sexiling that night is not an option. Trading schedules with your roommate can also be a helpful way to avoid messy situations. He or she can then plan to have people over when you’re at class or work.

4. Make friends with your roommate’s lovers

It’s always easier to do something you don’t want to do when it involves someone you’re friends with. Try to be friendly with the new person coming into your room so that it isn’t awkward when all three of you are together.

If you absolutely can’t let your roommate know that you’re using the room ahead of time, create some sign so he or she doesn’t walk into the room to find it occupied. Maybe put a piece of clothing on the door or get a whiteboard that says “knock.”  Even sending a quick text before you get down to business is better than nothing.

Sexiling is always a difficult issue to confront, but developing a few rules with your roommate can make your semester easier and bring fewer surprises to your already crazy college lives.

Check out 5 more tips on How to Keep your Sex Life Alive With a Roommate.

Having your parents walk in on you having sex definitely sounds like a worse alternative to having your roommate walk in on you… but then again, your roommate will not love you forever no matter what. Turns out, your parents grounding you for having your significant other sneak over after they fell asleep might have just trained you for the social consequences you could face if you are not too careful about having sex with a roommate around. Everyone thinks of college as this free love paradise…until they remember they have another person living in their romantic sex cave.

Read on for some laughs and tips to avoid being sexiled.

6. Stick to the plan

“One time my roommate and I were at parties across campus. At the start of the year, we had agreed to just text each other and let each other know if we were bringing anyone home to hook up with. But I guess she forgot this time, because when I walked in, her shirt was off and there was a guy on top of her. But get this: before I could walk out, she pulls the covers up around her and says, ‘Hey, come on in!’ as if I hadn’t walked in on anything. Lol, nice try froomie,” Sophie, a junior at Colorado State University said. Work out a plan with your roommate about what goes down when one of you wants to bring someone home. These women could have had a much better night if Sophie’s roommate had remembered to send her a text. If you think you might get too lit to remember to send that text, maybe set an alarm for your phone at 2 a.m., just in case.

“DO NOT MAKE THIS MISTAKE: Freshman year, especially during orientation week, either you or your roommate will convince yourself it’s okay to hook up with someone while your roommate is in the room. My freshman year roommate and I actually both became convinced of this on the same night and we had two guys in our orientation groups sleep in our respective beds on the same night. I don’t think either of us had sex with them, but in hindsight even both of us making out with them and getting hot and heavy seems so weird!” Ohio State sophomore June Chen said. This phenomenon unfortunately happens a lot with freshmen, so become the voice of reason and maybe have half of the group go somewhere else instead.

“My ex asked his roommate if it was okay if we had sex in the room while he was there, and the roommate legitimately agreed to it and just asked my ex to make sure he was asleep before we got to it. Um, it was NOT okay with me for us to have sex while his roommate was home! We didn’t last much longer after that,” Ohio State sophomore Lauren Marra said. Pretty sure he picked the wrong person to ask first in that situation. Hey, some people are cool with public sex, but sex with roommates around gets sticky either way. Don’t let the situation get awkward, guys.

“One time my girlfriend and I were having sex and my roommate ran into the room to grab her jacket, then ran out like it was no big deal? Knock first friends,” Alex Furlan, senior at Michigan State University, said. If you even suspect for a second that your roommate might be hooking up with someone, a simple knock cannot hurt. Better safe than scarred, right?

“If your roommate isn’t sex positive, get a new roommate. My roommate didn’t want my long distance partner and I to sleep in the same bed together, so I contacted housing. We just had really different values systems, so I moved into a different dorm and got a new roommate (and kept my LDR),” said Penn State sophomore Casey. Roommate issues definitely apply to sex too, so do not be afraid to contact your housing department if you two cannot come up with a compromise yourselves.

Updated on October 16, 2017 by Phoebe Bain to include “How to Keep your Sex Life Alive When You Have a Roommate.” 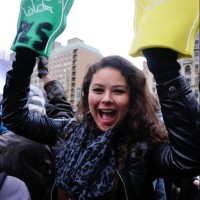 How to Pull an All Nighter for Finals Week
Next Post: I Met My BFF Thanks to French Onion Soup