Getting lost in the dust of the Jerry Sandusky-Penn State story is the ever-evolving Bernie Fine-saga. Fine, a long-time Syracuse basketball assistant coach was accused, about a week ago, of molesting two former ball boys from the late 1970s and into the 1990s.

As of today, things have changed on multiple fronts.

ESPN’s Outside the Lines aired parts of a recorded phone conversation from 2002 between one of the former ball boys, Bobby Davis and Laurie Fine, Fine’s wife. In the tape Davis asks Laurie if she knew about the alleged molestation.

Here are some of the quotes:

Davis: Do you think I'm the only one that he's ever done that to?

Laurie Fine: No… I think there might have been others but it was geared to … there was something about you.

There’s plenty more in the segment. I know eight minutes is an eternity in Internet time but it’s definitely worth a watch.

Here’s a link to the full transcript.

In the meantime, a third man has come forward accusing Fine of molestation back in 2002 when he was 13. Here’s the whole story:

Those are some tough new developments to swallow, but if we’ve learned anything from the Sandusky case and from these allegations it's that this whole situation could change by tomorrow morning. It’s easy to jump on Fine and demand his head, but who knows if that tape will hold up in court, and we really don’t know if the statements from the latest accuser hold any validity.

With these allegations coming to light, what’s missing from this scandal is outrage directed toward head coach Jim Boeheim. It’s not clear whether he has any insight into these alleged sexual allegations, but there is definitely a minimal amount of scorn heading his way. It's surprising with these new developments, and especially surprising after he called the original allegations “a bunch of a thousand lies.” 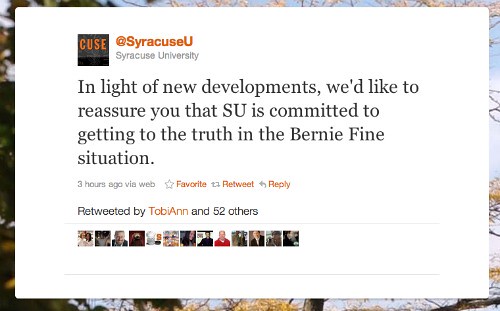 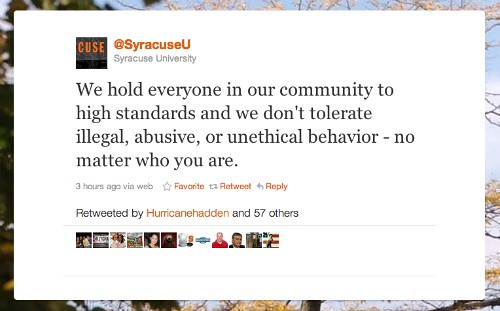 Except a news conference soon.