You are here: Home / Campus life / The Art of Campus Touring: Not Just Fun Facts and Walking Backwards

I graduated high school with a class of 63 students. My school was small and lacked school spirit. I wanted a change. College came around and I upgraded by about 45,000 people. I fell in love with Ohio State when I toured it for the first time. I saw how passionate my tour guide was and I realized that was what I wanted. Honestly, I fit the bill for a tour guide perfectly: I’m loud, outgoing and arguably annoying on first impressions.

I made it my Freshman year mission to become a University Ambassador campus tour guide and a backwards walker.

My first year of college, I had very few involvements. Getting acclimated to college life was stressful enough, so I really didn’t prioritize joining a million clubs. But to be a tour guide, you have to be involved on campus and my only involvement at the time was with my improv team. I applied for the tour guide position anyway, beginning my eight–month application and interview process. It took weeks to complete my application, perfecting my essay answers and exaggerating the few involvements that I had. I spent the following weeks anxiously waiting to find out if my application moved me forward in the process.

When I found out I made it to the group interview round, I felt shocked. Suddenly, becoming a tour guide didn’t seem like some far away dream. I hardly remember the interview except for the fact that everyone introduced themselves by saying what they are involved in. As expected, my bi-weekly improv practice was nothing compared to the nonprofit experience, academic fraternities and leadership roles in large organizations the other students had.

I had to wait the entire summer until my final interview. For three months, I agonized over it and fantasized about being a tour guide. Looking back, I had a very romantic perspective on what touring really was, but nonetheless I wanted it more than anything. Every other night, I had dreams about my interview or about touring. I was obsessed.

When it was time to drive back to school for my sophomore year, I spent the eight hour car ride practicing my sample presentation about the bus services at Ohio State. I could have picked the city of Columbus, football or residence life, but for some reason I chose the bus system.

The day came and I arrived to my interview 45 minutes early in the suit I bought specifically for this event. A panel of three people greeted me. Two of them were current ambassadors who wowed me with their radiating enthusiasm and smiles, and the third was the woman in charge of the program. I felt like I could throw up the whole time.

Similar to my group interview, it was a blur. The only thing I can really remember was when they asked me to state and explain the plot of my favorite book. I panicked and said A Clockwork Orange, which led to explain one of the most gruesome novels of the mid-twentieth century. Hopefully they weren’t familiar with the cinematic work of Stanley Kubrick. Otherwise, they might think I was a psychopath.

I didn’t hear back for a month, panicking every time I saw a tour pass by on campus. Finally, on a Friday afternoon, I got a call from one of the ambassadors telling me I was hired. I immediately broke down crying on the phone. I called everyone I knew: mom, dad, both grandmas, best friend from home, cousin, best friend from college, aunts, uncles. I even texted the guy I dated the semester before despite the fact that we were no longer speaking. Everyone had to know. I had so much energy I ran to the CVS across campus and back just to buy chap stick. Not sure why I did that.

For the next six months, I told everyone I met that I was a tour guide. I looked for any chance to bring it up. Walking backwards and spitting out fun facts about Ohio State became my new party trick. I especially loved doing it walking home from parties. (I won’t disclose how many times I have fallen and sustained head injuries from doing this on black ice.)

Though the social clout of being a tour guide was fantastic, the certification process was brutal. For about four months, I had constant meetings, trainings, practices and study sessions to memorize a 70–page script. The process chewed me up and spit me out with absolutely no remorse. But never did I think twice about my new job. I was a freakin’ tour guide. I felt like my life was set (which is a hilarious mindset looking back).

I finally became certified in February (I was hired in September, BTW), meaning no more pressure to impress the grumpy upperclassman with a clipboard in the back making sure I nailed 108 facts and 13 stories. I quickly mastered walking backwards and became a firm believer that it is the emblem of class and tradition in the world of college touring.

Even when the excitement of touring wore off, I still loved it deep down. Anyone who has been a college tour guide knows the grind. You wake up early, throw on your polo, haul yourself to the meeting spot, attempt to mask your omnipresent internalized depression and anxiety from school, and go out there and give the best tour you can. Touring isn’t a regular job where you can show up and work silently, you are expected to represent the entire university. Someone’s entire college decision could rely on this one hour and 30 minute segment of your life.

The little moments during touring stand out to me the most. It’s always on the tours where I just don’t want to be there at all: I have a test later that day, I’m tired, I’m in a bad mood. It’s the tours where it’s just another shift to me, but then in the middle of some random spiel, I’ll say one of my regular facts and see someone’s eyes light up. There is nothing better than that reaction to something you said as they giddily look at their parents. Something so mundane to me, like the steak nights at the dining hall, could be that one thing that sells the university to someone.

As a junior, when the glow of touring was long gone, I took time to really get to know all of the ambassadors. We are high energy, enthusiastic, loud and overly obsessed with Ohio State, but we are all so different. They are leaders in diversity, or they orchestrate the entire student section at football games. They teach kids. They lead rallies. They travel cross-country to music festivals. No two of us are the same.

Even when touring is less than glamorous, the experience is truly rewarding. The skills you gain in public speaking and interpersonal communication. The miles you walk backwards. The families you meet. But for me, it’s the friends I made who make the grind worth it. The stories they have about overbearing moms or dads desperate to party never fail to make me laugh. The times they yell words of encouragement to me across the Oval when I’m giving a tour. The rant sessions about scheduling crises at the bar across from our weekly staff meetings.

I don’t think I could have ever imagined the little things that have come with being a tour guide that truly shaped my experience. To every friend I’ve made in the program, every mom who has pressed me about the lack of air conditioning, every bored prospective student and every joke that I have tried and failed: thank you for giving me the experience of a lifetime. 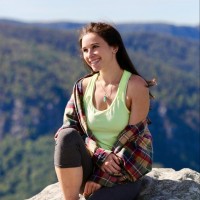 Lily Maslia is a third-year Journalism and Media student at The Ohio State University. When she’s not writing articles, Lily enjoys performing improv and standup comedy, giving campus tours and talking about the Kardashians.

How to Become an Editor
Next Post: A Call To All Mistreated Female Sports Fans