You are here: Home / Life / Freshmen / Talk Wordy to Me: How to Start a Conversation with Someone New

Most people would say that the best friendships begin when they happen naturally and unexpectedly. Each conversation started with someone new can be the first of many with your future best friend. Whether you’re totally comfortable jumping right into a conversation about the color of your underwear with a stranger or just the thought of social interaction makes you cry for your mommy, these 10 tips from University of Florida students will help you strike up a conversation with the rando sitting next to you at the dining hall.

Pretend you’ve seen them before

Among the tens of thousands of students who attend your school, there’s a chance you could’ve seen someone before and not remembered. Take advantage of this by using it as a conversation opener, or tell a little white lie so you don’t come off as a weirdo talking to a random stranger. “My friend would ask ‘hey were you part of my Preview group, because you look really familiar.’ It makes you not seem too creepy because maybe they did recognize you, but it also gives you a reason to talk to someone,” freshman Savannah Adams said. The other person might deny ever meeting you, but you just found your way into a conversation with him.

Sometimes, it’s better to just act on your thoughts than to sit around thinking and making yourself nervous. When you see a person that you want to talk to, go for it. “When we moved in, I was in the bathroom at midnight and [this girl] and I were brushing our teeth next to each other and I just started talking about rushing and found out she lived in a single and we became friends,” freshman Danielle D’Urso said.

Ask about their college experience

What better thing to talk about than what every college student has in common? “The key to starting a new conversation is asking how they’re liking school and how they’re adapting to college because that’s something that we’re all going through, so I can relate to it really easily,” sophomore Josh Walton said. Freshmen are relieved to find someone just as stressed out or homesick as they are.

Release some of the tension and formality of a conversation with a stranger by cracking a few jokes and making the other person laugh. “I’m really bad at making new friends and talking to people, but generally I tend to invoke a persona of a very egotistical and loud jackass and make a lot of jokes to be loud and funny,” freshman Will Stupski said. After all, laughter is contagious and will surely lighten up the mood. How about that dining hall food, eh?

When making a first impression, maintaining open and friendly body language is very important. Generally, crossed arms, sagging posture or lack of eye contact signals a disinterest in the conversation, which you wouldn’t want the other person to assume of you…especially if you’re trying to get his digits. “My conversation approach to someone who I find isn’t so much a change in what I say, but it’s more body language. If I’m attracted to the person, I’ll probably touch them more, like on the arm, and it establishes that I’d like to be close to them,” freshman Amanda Parrish said. With the right amount and type of body language, you can make any person yours.

Introduce yourself, your major and where your hometown is. Once the other person shares these fun facts, compare class schedules and find out if you have similar interests ranging from favorite food to clubs that you’re planning to join on campus. “I met a guy and asked him where he’s from. I found out his dad also works for the Foreign Service, just like my dad. His dad was also posted in Beijing, where my dad was too, and he went to a school that I knew of. He knew the same places I knew and lived in the same area. What are the odds of meeting someone like that in Florida?” freshman Caleb Chen asked. Once you’ve found common ground, the conversation can go anywhere. Make sure you’re not the only one talking by asking questions and being attentive.

After you’ve exhausted all the typical questions you’d ask when meeting someone new, there’s bound to be a lull of awkward silence. “If it gets awkward, I specifically make a point about it being awkward so they say ‘oh its fine’ and then we’re comfortable by then,” freshman Luke Bickell said. Pointing out that both of you are experiencing an uncomfortable situation will ironically bring you closer together. Ahh, bonding.

There’s nothing weird about asking to sit with someone and starting a conversation with her. Just kidding, it might be a little weird. However, go about it in a way that a normal person would. Don’t make up an obvious lie about how you’re allergic to all the other chairs in the room. “If someone is sitting alone in class or the dining area, I just go up and ask to sit with them. I just like to keep it natural where the conversation can just keep flowing by talking about things that are relatable,” freshman Taylor Walkup said. Keep it simple–if you could start friendships by sharing crayons in kindergarten, surely, you can do anything.

Don’t be afraid to be yourself and to let the other person know that you are intentional in starting a conversation with them. “I just go up and be direct and introduce myself and ask about them. Confidence is the most important thing when approaching somebody,” freshman John Hall said. You’re both people (…right?), so there’s no reason to be nervous. Approach with your head held high and a friendly smile, and the other person will most likely reciprocate, unless you trip on your way over and spill your chili dog all over her shirt.

Use anecdotes to get to know people and to lighten the mood. If something that the other person says resonates with you, share your past experiences with them. “One anecdote that I tell often is that I used to love forestry in high school, and I’ll talk about getting lost in the woods and growing cacti. Sometimes, people are kind of creeped out, but it grows on them,” freshman Emily Casper said. Don’t be afraid to make fun of yourself because your strange quirks are what make you memorable. 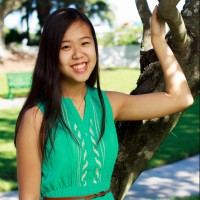 Major foodie, believes that there's no such thing as too many puns, and aspires to have a giant slide in her house one day. Freshman journalism major at the University of Florida.

Pride is Just a 5 Letter Word
Next Post: You Can’t Do Everything, Even if You Put Your Mind to it