You are here: Home / Life / Academics / You Snooze, You Lose (And Have To Run a Mile)

It was my first run at UMD. One morning I was sprinting throughout campus, my heart pounding, wind blowing against my face, the steady pace of my sneakers thudding against the ground–and I continued to push myself. I sprinted up Stamp hill and raced across the Mall. I didn’t pause to absorb the beauty of my school.

When I reached my destination, I stopped abruptly and a cool wave of relief washed over my body. I opened the door to my Communications class and hoped I wasn’t too late.

My first run at UMD didn’t take place in the gym at a nice, reasonable hour. No, it occurred during midterms week.

The first exams of my freshman year came quickly, but I was ready. I studied extensively and everything went smoothly. I went to bed early and set three alarms before my 8 a.m. exam. “BRRINGG BRINNG BRRINGG!” I jumped out of bed, started to get dressed and then looked at the clock.

Before I could comprehend the time, my roommate shrieked, “MAG!! It’s 8:30–don’t you have an exam right now?” I’d woken up to my roommate’s alarm. My alarms hadn’t gone off. I froze; what do I do? I didn’t know my professor well, it was only October and I had no clue what he’d do if I showed up late.

“Fake an injury, fake sick, go to the Health Center,” suggested my roommate. I thought, How do you fake a sprained ankle to avoid a test? I can’t do that. Instead, I decided to go on my first run at UMD. I threw on sneakers, grabbed my backpack (fingers crossed it contained a pencil) and started running.

My first run at UMD was half a mile in length, mostly uphill. I was sprinting at 8:30 a.m., probably the earliest I have ever exercised; I ran as fast as I could through campus. I started to see people from my class walking back and panicked even more. I kept running, then stopped to catch my breath and attempted to collect myself before entering class. I burst into the classroom breathing heavily, wearing pajamas and sneakers, looking like a wild woman. I didn’t have time to be embarrassed.

My first run at UMD had a hurdle at the destination. I was prepared to beg and plead with my teacher, but he didn’t even make eye contact with me. He simply said “here,” and handed me the test. It turns out I missed a video at the beginning of the exam–which half of the questions were based on–and I almost started to cry. I was so disheveled. My heart was racing, my head was searching for the answers and my hand was scribbling any words it could.

I ran out of my class as fast as I had run into it. I wish I could say that I did well, that my adrenaline kicked in and suddenly I knew all of the answers, but sadly that was not the case.

I bombed my first exam of college. Granted it was only a Communications class, but still, failure is not a feeling to which I’m accustomed. I’m not alone in this endeavor, sadly; I’ve heard sob story after sob story of sleepy students banging on the door to a final and professors shaking their heads, of students forced to retake a course. I was one of the lucky ones–but it didn’t feel like that in the moment. 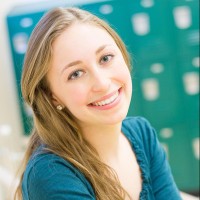 Maggie is an undecided freshman at the University of Maryland. She has a passion for writing and is a chocolate connoisseur who can quote every episode of The Office.