You are here: Home / Life / Freshmen / It’s Over: After the Roommate Honeymoon Phase Ends

The first month together is always great. You and your roommate go to every meal together, hang out with the same people and spend all your time together binge-watching Friends on Netflix. But why is everything suddenly going wrong now? How do you rekindle that bond? Or, if that bond will never be what it once was, what’s the best way to make it through the rest of the year without pulling out each other’s hair?

Turns out, Resident Directors have the inside scoop. Steph Przepiora is currently a Resident Director at the University of Pittsburgh at Greensburg. During her undergrad years at University of New York at Oswegoshe she was the Hall Council President, a member of the Welcoming Crew and a Resident Assistant. She now works in the residence halls to create an engaging and safe environment in her hall. So yeah, she has a lot more experience with this stuff than any of us.

CM: How would you define the Roommate Honeymoon Phase?

For some groups of brand-new roommates, it’s the period of time where they do everything together and are essentially best friends. They’re not bothered by anything and they don’t express any personal preferences and instead just agree with whatever their roommates are saying.

CM: When do you know that the Honeymoon Phase is over?

SP: The phase is over when the roommates finally are bothered by something the other does. This usually results in some kind of disagreement, whether it’s a fight or just a complaint to the RA.

CM: What are some of the most common issues that roommates run into?

SP: Cleanliness, visitor issues and in traditional style rooms (two beds in a room, not apartments) noise while the other is sleeping or doing homework.

CM: What’s the best advice you can give to someone who is starting to have problems with their roommate?

SP: Think about solutions and compromises and talk to your roommate right away. Don’t keep it to yourself, but also consider them. If you’re having trouble with your roommate eating your food for example, suggest that you go shopping together and make a “free-for-all” snack bin in your room that’s fair game to all roommates, and then discuss that other food not in that bin is not for sharing. By coming up with a solution to the problem before confronting your roommate, it’s likely that the conversation will go more smoothly and not end in a fight.

CM: How would you help a room struggling with sharing cleaning responsibilities?

SP: I would ask what “clean” means to each of them and have them discuss what each of them can live with. They will likely need to compromise. It’s not realistic for some people to clean the entire bathroom every single day. I would then have them set up a cleaning schedule and suggest, if possible, that instead of “you do it this week, I’ll do it next week,” choose a time to clean different parts of the room or apartment at the same time. That way there’s some roommate bonding thrown in as well and neither roommate feels bitter about being the only one cleaning while the other is watching Netflix. This would be documented in a roommate contract and would be signed by each member of the room.

CM: What would you suggest to a room where roommate A borrows roommate B’s clothes and food?

SP: I would again ask them to talk about what is okay to borrow or use and what is not, and then suggest that they document that in a roommate contract. If they do decide to share food, I would suggest going shopping together and splitting the cost. If they decide to share clothing, I would suggest making very clear what can and cannot be borrowed. I hated when my roommate borrowed my hoodies because I could never find them when I wanted them.

CM: What would you suggest to a roommate who thinks her other roommates are too noisy when she’s trying to sleep?

SP: I would suggest that the roommate discuss times of night when it is no longer appropriate to watch TV or movies without headphones and when it is no longer acceptable to have friends over. I would also suggest that if the roommate having trouble sleeping is ultra-sensitive, that they get some earplugs or a fan to drown out some of the noise. It is all about compromise, the other roommates have a right to move around the room when the other is sleeping, but they should also be considerate and thoughtful about the amount of noise they make.

CM: How can everyone be a better roommate?

SP: Actually think about what you need and want to feel comfortable and don’t keep that to yourself. It is about compromise also, so consider that the other person has a right to their preferences, too. If you are uncomfortable with something, or something is bothering you, say something. Don’t let stuff build up because it will just be worse later. Understand that while you might never live in this close of quarters with anyone again in your life, you can learn a lot about interacting with people from this experience. That’s why staff members encourage roommate agreements and roommate mediations, because you will have to learn to confront people about things that make you uncomfortable as well as speak up for yourself regarding your preferences for the rest of your life, might as well practice now. 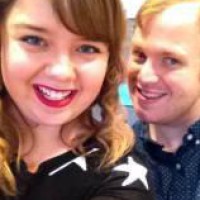 I'm a senior writing major at the University of Pittsburgh at Greensburg. I love scalloped potatoes and I'm pretty great at tie dye.

Why Christmas Should Be a 24/7, 365 Kind of Thing
Next Post: 5 Steps to Booking your Spring Break in Paradise