You are here: Home / Party / Party Culture Is Not an Excuse for You to Touch Me

I felt suffocated in high school. I grew up in a small town in eastern Iowa where nothing ever happened, graduating with 81 classmates. A group of kids toilet-papering a school board member’s home was the big scandal of my senior year. By graduation, I wanted nothing more than to run away to college. I applied to the University of Iowa the first day the application opened. The hour drive from my hometown meant my family could easily drive to see me, but not too often. The renowned writing program confirmed my choice. Plus, IU was known for being a big party school. What could go wrong?

I never experienced any issues with alcohol. I drank with friends, but I consider myself a responsible drinker. In fact, I achieved a 4.0 GPA both semesters of my freshmen year. Sure, there were a few times when I became “that girl” laying on the floor crying because she was too drunk. Haven’t we all been there?

But one small moment changed all that.

My friend Nick and I decided to partake in Thirsty Thursday one night towards the end of my freshman year. Around 11 p.m., we found ourselves on a dance floor in a bar with drinks in our hands, enjoying the music and the vibrations of our intoxicated bodies. It was just Nick, an out and proud gay man, and me. To an outside eye, I knew it was obvious that he was not my boyfriend. Since guys seem to only respect women when they are involved with another guy, I became an easy target by myself.

The dance floor was packed that night, and students stumbled all over each other. I felt a hand hit my butt. I figured it was just someone who couldn’t control their dance moves. The second time I felt a touch, I barely acknowledged it. A few minutes and another tap later, I knew something strange was happening.

I turned around to see who was invading my personal space. As soon as I did, a boy with brown hair wearing a grey sweatshirt and jeans leaned over for a fourth time and put his hand on my body. He kept on dancing next to his friend and looked around the bar, avoiding eye contact with me.

“Did you just touch me?” I yelled over the music.

“What?” he turned and yelled back.

“Um, don’t f—king touch me?!” I yelled again. I started to walk towards him. Nick put his hand on my shoulder.

“I can’t hear you!” the guy said back to me. He laughed to his friend.

“I can’t hear you! Music!” he repeated as he pointed to his ears. Funny how I could hear him clearly.

I started to walk towards him again, ready to make sure he heard me loud and clear.

“Macey,” Nick said. “Come on. It’s not worth it.” I looked at him, irritated. He didn’t understand what it felt like to be violated.

The two boys walked to a different part of the bar, no consequences faced, my body an open target they had already hit. They walked with confidence, no shame in the game they were playing. I wondered who else they ambushed that night, and hoped that the answer was none. However, with those smug expressions, I wasn’t so sure.

I told my boyfriend what had happened when I got back to my dorm that night. He was uncomfortable, frowning and staring at the carpet.

“I should have been there,” he responded. “I’m sorry.”

The sadness in his eyes angered me all over again. It was one thing to hurt me. But to make my boyfriend guilty over something he wasn’t there for? He shouldn’t have to feel guilt at what these boys did, when they walked off and probably forgot about me within the next few minutes.

I looked at every guy that passed me a little harder than usual the next time I walked to class. His face remained blurry in my mind, but if I saw it, I knew I would recognize it. I couldn’t forget the feeling of his hand on my body and the smug look on his face when he walked away. I knew I would never forget how small he made me feel in that one moment. Beyond that, I even prepared a lecture in my mind for if I ever ran into him. “How dare you prey on me,” I would say.

I hope his five seconds of enjoyment was worth it. 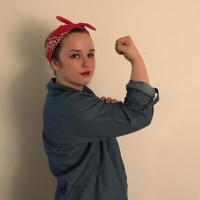 Third year creative writing and journalism student at the University of Iowa. Lover of reading, writing, cheering on the Hawkeyes, Dunkin Donuts, and admiring dogs from afar.

UCLA’s Top 10 Places to Sleep On Campus
Next Post: How to Save Money So You Won’t Be Broke Forever