You are here: Home / Life / A Life Lesson from a Homeless Man

Getting into a pinch of trouble during college isn’t so bad. But when the police interrupt a good time, the time comes to pay the price for freedom. The time I almost got arrested, I never thought that something good could come out of the situation.

One night last fall, my buddy Frank and I stopped by Wal-Mart after work to pick up air-soft guns because our neighbors challenged us to an intense game of capture the flag. The idea sounded sketchy, but still innocent enough to consider fun.

We met the air-soft brigade in the field behind our houses where we barbecued and threw the football around without worrying about breaking a window. We knew most of our neighbors by name; some of whom we saw on their back porches smoking cigarettes and wearing thick jackets as we loaded plastic pellets into our rattling toys.

Ready to start the game, we split into teams. Frank and I started from the opposite end of the field as our opponents, using a couple of cones as flags. We began the charge, ducking behind trees and trying to get a good line of sight on the enemy.

Frank and I lost the first round so we decided to get redemption–and a little revenge, too. As we positioned ourselves to start the second round, I heard a siren and saw a cop parked on the road, blue lights whirring as an officer approached us while pointing a gun.

“Freeze!” she shouted. None of us really understood what was going on because in our perspective, we were just throwing a football around in our backyard. “Drop the weapons,” the officer said. It took a second to register her words, but we complied.

“They’re toys!” I exclaimed, but she wasn’t convinced. I didn’t realize the severity of the brewing showdown, and in the cold air, I did what I always do when I’m nervous. I put my hands into my jacket pockets.

The officer stepped closer to me, pointing her gun and yelling at me to take my hands out of my pockets. Fifteen officers then swarmed out from the sides of our houses.

They pointed their weapons, pinned us down and cuffed us on our stomachs. That’s when one of the cops found a small bag of weed residue in my jacket pocket.

In the end, I got 25 hours of community service to avoid a criminal charge for possession. I decided to fulfill my hours at the local homeless shelter and found out the other volunteers were also students trying to avoid a jail sentence by paying dues in the underbelly of the college experience.

Although my sentence sounds pretty easy, it still added another commitment to long days of school and work.

One night at the shelter while on a smoke break, a man in his late 30s walked out from the darkness covering the bunks, rubbing his eyes and sniffling. It was the first time I saw someone cry at the shelter.

He wiped his face and made eye contact with me. “You go to school?” he asked, noticing my Florida State shirt.

“Yeah, I go to FSU,” I said, caught off guard because the shelter generally discouraged volunteers from talking to residents.

“I’m trying to go to school. I’ve been going to the library to use the computers for the past couple weeks,” he said, trying to maintain his composure as his voice cracked and his eyes began to well with tears. “I just can’t figure out all these financial aid papers and applications. I mean, I gotta do it for my kids, so their dad isn’t homeless no more.”

“I’m sure you’ll figure it out, man. You’ll be alright,” I said, trying to encourage him.

“Yo, you got a cigarette?” he asked, even though he knew it was against the rules. “Never mind, I don’t want you getting in trouble. It’s just, it’s hard, y’know,” he said, and he shuffled away from me.

But I didn’t know–my life had always been relatively easy. I find comfort in the warmth of my own room, prepare food for dinner and even stress about school.

It wasn’t until this man made himself vulnerable to me that I realized the pursuit of higher education meant more than fulfilling an American rite of passage, but instead a step toward the middle class where consequences result from actions. I didn’t know anything about the man in the shelter other than that he seemed unhappy with his life.

Both the homeless man and I made a mistake in order to learn a life lesson. My punishment involved community service and finishing my 25 hours, I got my freedom back. The residents at the shelter don’t have that same freedom. They wake up everyday at 6 a.m., trying to inch closer to independence on someone else’s terms.

I came to college to experience living on my own, and the people at the the shelter don’t have the same luxury. Now, instead of taking my independence for granted, I aim for mature mistakes that definitely don’t involve air-soft guns. 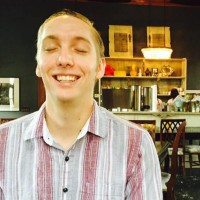 Colin is a Senior Creative Writing Major at Florida State. He gets a kick out of live music, good food, and pickup hoops. In the future he hopes to do better than he did the day before.

Should I Stay or Should I Go: The Perks of Going to School In-State
Next Post: STEM Majors: Where are the Women?