You are here: Home / Life / Dating / On Solitude in Cities

Before I depart for Berlin, my plan committee tells me to revise my title from “On Loneliness” to “On Solitude.” I change it without thinking, despite feeling confused, so I can leave.

Google defines loneliness as “sadness because one has no friends or company,” while it regards solitude as “the state or situation of being alone.”

But what about the sadness that occurs even when surrounded by hundreds of people? Doesn’t it seem so depressing that in crowded city streets, you can brush shoulders with others but never really connect? Couldn’t one find solitude in a big city, even though rarely physically alone?

Anonymity proves possible for anyone in Berlin, even Bowie. I learn this from a mural at Tegel Airport as I stretch my legs for the first time in this strange city, constantly in flux. Bowie and Iggy Pop lived above an auto parts store in Schöneberg during the 70s to get sober. They wanted to get lost. Slowly I begin to understand the city’s bleakness bit by bit.

Everyone tells me not understanding the language brings unmatched loneliness.

A city of silence. Berlin’s harder to eavesdrop in, but I get by. In Potsdamer Platz, where Bowie wrote “Heroes” in Hansa Studios overlooking the death strip, I watch a film with a guy originally from Leeds named Theo*.  He works in social media marketing because he doesn’t know any German.

Seeing the once-barren landscape replaced with towering glass condos and neon signs for Dunkin’ and Starbucks creates a surreal portrait. We sit under the white tarp and its bright purple lights, observing someone in their kitchen window on full display to the crowds below. Theo asks me if I would ever live there. I shake my head. He says it would be a reflection of his loneliness, to be cooking pasta or something and look down to realize there are people outside after all. But he’d be content to go on cooking by himself. If that doesn’t make you sad, then wouldn’t that represent solitude, I ask him, rather than loneliness?

Instead of learning bits of German, I learn British slang from him. Peckish instead of hungry. Skint instead of broke. We drink beers outside, too skint to put gin in movie theater slushies. I hear a group of people scream in American, and of course, to my luck, my suitemates are the source. Theo laughs, surprised I know them, the delinquents who break a lawn chair while taking a selfie. I find it surprising that despite my loneliness, I have the company of people I run into and know. Not as completely lost as Theo. Berlin doesn’t feel as foreign as before.

I find myself in a club where no one cares about your identity or where you come from.

The policy prohibits taking photos of anyone or anything. The moment lives within you and the people on the dancefloor. I think of Theo the entire night. As much as I like meeting strangers, I can’t make out with one. I can only like someone once I know the little things about them—the kind of jam they put in their sandwiches and the music they enjoy. I prefer conversation over anonymous debauchery.

Theo questions my well-being after I tell him I’ve been listening to “Sometimes” by My Bloody Valentine on repeat all week. I just think it’s a good song. A song that floods my ears with sheer noise. The fuzziness wraps me in a blanket of sound. Equivalent to staying under your covers all day long. I drift off, knowing cars and people exist within my reach. My friend and I visit the Ritter Sport store on a Saturday. This brings a different sort of loneliness. One that evokes memories of childhood. Of waking your parents up, excited to go somewhere new, to do something different. We are the oldest people there, making chocolate molds with German schoolchildren. Their parents sneak photos of them through the transparent ceiling. Our parents are fast asleep.

Theo’s apartment is far from what I expected. It bears no resemblance to the under-furnished bohemian daydream of a shipping crate bed and empty beer bottles stacked on the windowsills I had imagined. Instead, his room reminds me of a childhood bedroom. His bookshelf holds framed photographs of his friends and family alongside miniature robot figurines and comic books. We share his queen bed—luckily not a twin XL like mine—like kids. Just kids.

I wear his green sweater on rainy days.

It feels like I’m wearing someone else. That I am someone else. He tells me he wants to be in my photo series. Asks if I’ve seen Lost in Translation because my work reminds him of it.

We make plans to visit traveling fairs, to ride rollercoasters and Ferris wheels together. As September rolls into October, I think we’ll make it until the end of the year. I try to keep my evenings free and skip parties with friends. I want to stop by his office to bring him the Kinder advent calendar he posted on his Instagram story, but he stops replying as much. He ignores my plan to drink rosé in Mauerpark or go to 8mm Bar. Without a photograph, any evidence of our relationship—except for a few ticket scraps and receipts—becomes an isolated occurrence. For us to remember only if we want.

I think of everything I wish I could tell him, as I ride the S-Bahn to Schöneberg for a Bowie pilgrimage. All of the raw emotion that gets lost in translation, intentions not fully recognized.

Actions must be superior to language, but how could I kiss him if he left me on read?

I find Bowie’s old apartment on Hauptstraße 155. His plaque sits, mostly ignored, in between tenements and döner shops. People rush past me, on their way home from work or running errands, as dusk arrives. I’m left on the sidewalk caught between strangers and trees. It starts to rain.

I realize that loneliness is the noise of the city reverberating around you, while solitude is using it as a blanket.

I light a cigarette and linger for a while. Alone but not alone. The city becomes my company. 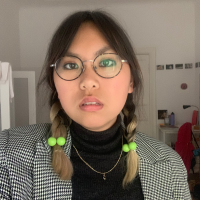 Coronavirus Canceled Many Things, But Not Your Quarantine Birthday
Next Post: Which Ivy League School Has the Most Dominant Sports Teams?