You are here: Home / Life / My School Choice Boiled Down to One Missed Blurb

Choosing a school can make or break your college experience. It might even be more daunting than waiting for acceptance.

Applying to college is one of the most exciting, nerve wracking times during your senior year of high school. You go through countless school’s websites and tours. Do I want to stay in-state? Or go to an out-of-state school? For those students that have their heart dead set on a school are lucky they can circumvent this process.

Unfortunately, for the rest of us we have to start at the beginning. As the early decision and regular deadlines pass, we put the idea of acceptance letters in our afterthoughts. I mean it’s senior year, we have to make the most of it.

Then, a friend, or a classmate receives their acceptance email. It’s terrifying as you keep refreshing your email every 4.5 seconds to nothing. Finally, in the last second possible there’s the decision email.  If you practice religion, you probably sent a small prayer up saying, “Please let me into this school.”

After a deep inhale followed by a bellowing exhale, you proceed to open the email. Your eyes immediately scour the email, even though your mind wanted you to read it normally, click the link to log into the application portal. You’re accepted. You can finally breathe again and you can now rejoin the land of social media to share your good news.

The hard part is over. You’re going to college, but the excitement over one acceptance, especially if it’s your first-choice school often overshadows the fact that you have three or four more decision letter emails coming.

Depending on the varying schools’ deadlines and notification timelines those others slowly trickle in or they flood your inbox within the next few days. At my high school they had students print out their decision letters and posted them on a board outside of the guidance counselor office. It was a badge of honor or a statement of pride to see you letter amongst the sea of acceptance.

Now after receiving all of those offers by far the most important decision comes. Which school do I choose? College decision making is tough especially if you are torn between two or three.

My top two schools were the University of Maryland, College Park and the University of Maryland, Baltimore County. I can’t say there’s an extreme rivalry between the two or animosity. They are both great schools with different campuses and appeals. I honestly felt that outside of their locations College Park being an urban campus and Baltimore County being a suburban borderline rural campus there wasn’t any great differences between them on the surface. It also didn’t help that they are both an equal amount of distance from my house.

Needless to say, I had a tough decision.

So, I focused on the program I wanted to study—broadcast journalism. UMD offers broadcast journalism while UMBC offers media and communications studies as a similar major. The 4-year course plan for each school was different but I had interest in both. I started asking around to people I knew that graduated from the schools or attended them currently. Of course I received mixed reviews. Some people were for UMD, while others pushed hard for UMBC.

I found myself at a standstill. So, I decided that I would learn more about each school and make an informed decision from there. I requested information on both school’s websites via email and I decided once I received that I would go on a college tour of UMBC.

A week or so passed and I received an envelope from UMD. In it was a red and white folder containing interesting facts about the school, the alumni and the curriculum. I was so excited, probably more than I should have been and I picked through and read every paper within the folder.

I was impressed. The recent years graduates found jobs at CNN, FOX News, MSNBC and other major news outlets. A number of them even moved to New York City to pursue their passion, something I’m also interested in doing upon graduating. The faculty was quite decorated as well, many of them being award-winning journalists and local news reporters and producers.

The individual track for broadcast students also interested me. The folder contained more detailed information about the course. I felt a synergy with the school and its program and it felt like they really wanted to produce the next generation of quality journalists. I put their folder aside and awaited UMBC’s information. I was thinking they had some stiff competition.

Days and then weeks passed, and I still hadn’t received anything from them. I thought it may have been lost in the mail or maybe they were being flooded with other communications requests and mine slipped through the cracks. I made up every excuse I could think of before I sent another request to test my theories.

More days passed, and I finally concluded that nothing was coming. I’m not sure where the communication broke down and I’m not looking to place the blame on anyone, but it was disheartening to not feel as valued as a student as I did with UMD.

Needless to say, that helped make my decision a lot easier. So, I logged into the application system to accept my pending seat with UMD. I received my congratulation email and selected my new student orientation day. Now that I’m in my last full academic year I can honestly say I made a great decision.

Filed Under: Back to School Freshmen Life 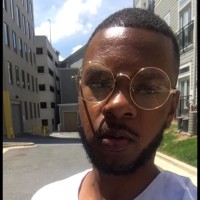 DeLon is a junior broadcast journalism major at the University of Maryland-College Park. He enjoys traveling and having new experiences.

10 Best East Village Restaurants for #BrokeCollegeStudents
Next Post: How to Be a Reporter When You’re Scared to Talk to People