You are here: Home / Life / Academics / Finals / My Last and Only Chance: An Open Letter to My Macro Final

In a perfect world, I might have had a chance to succeed in macroeconomics before the final exam. But no. You see? Even in high school, I struggled in that course. I remember turning in a test to the teacher and then taking a seat. Since I sat right in front of him, I got a first hand show to what grading my work must be like. My teacher took off his glasses, sighed and rubbed his eyes after reading my answers with furrowed brows. After collecting himself, he spoke to me in an exasperated tone. I can still hear his words loud and clear in my mind. “Alexa, some people just aren’t meant to be economists,” he said.

And as my grade gradually dropped to failing in ECO2013, I could not help hearing those words over and over again.

For those of you who don’t know, Journalism majors have six critical tracking courses to take, with Introduction to Macroeconomics as one of them. This meant that I could not get out of taking this course and had no other option. Lucky me, I know. I took economics before in high school and only passed because of the heavily weighted curves that the teacher offered honors students in comparison to AP students. No doubt in my mind, I knew that I had my work cut out for me in this course.

Given that I took the class in high school, the first couple of chapters for the course were familiar to me. Maybe that familiarity contributed to my first set of hundreds on the quizzes. Maybe I actually grasped the concept of supply and demand. Either way, those first two quizzes of the class were the tip of the mountain for me, because it all went downhill from there.

Now, I take full responsibility in admitting that I could have tried harder than I did.

Instead of letting myself amass two zeroes on quizzes, knowing that my professor drops the two lowest scores, I should have done them in hopes of dropping two low grades. But alas, I did the opposite. And there came a week in which I forgot about the quizzes all together, bringing the number of zeroes to three. Instead of skipping the lectures after watching a little and just going straight to the quizzes, I should have attempted to learn the material instead of guessing my way through it.

The first test actually went well. Okay, “well” might be an overstatement. I got an average grade of 75 percent. But in my book that was a golden A. If I rode the C train for the exams, I thought to myself, I can definitely scrape by with a B in the class. So when exam two came around, I did my little studying that I did for exam one and prayed for the best. Walking out of that room, I didn’t feel the normal soul-crushing discouragement that comes when you know you just bombed an exam. In my head, I told myself I at least got some form of a D. I can work with a D. I can live with D. But I didn’t get a D.

My heart didn’t just drop when I saw the 50 staring back at me on Canvas; it plunged down to my feet and left my body.

Rushing to the grade calculator in despair and worry, I plugged in all of my scores on the assignments we’ve had so far. That heart that left my body? Yeah, it just got steamrolled by an eight-wheeler. I had an F average in the class—a failing grade. I needed to score well on my final exam, getting a grade that seemed far from plausible. My mind immediately started spinning with a tornado of scary thoughts.

Now I know that some people think that failing a class builds character, teaches me how to push harder and all that jazz. And to those people I have one thing to say: ha, yeah right. Since I have the highest level of the Bright Futures scholarship, failing a class means that I have to pay back the entire cost of the class. Keep in mind that I pay for everything college related out of pocket without any FAFSA, scholarships, loans or family assistance. So that just means, I’d have to somehow become a magician and conjure up over $800 out of the thin air. To make matters even worse, failing a class would drop my GPA below the minimum requirement necessary to keep the full-tuition scholarship. Breathe, Alexa. Just breathe.

Shortly after my little panic attack, I emailed the professor to meet with him to discuss my grade. Already discouraged, he simply amplified my lack of esteem and hope. I kid you not, when I tell you that he straight up told me that “it would be a stretch for me to pass the class with a C.” I needed a solid B on the final exam to pass with that. He advised to shoot for a D and pray for the best. My throat closing up as he spoke, all I could do was nod my head and hold back tears. Despite my plans to double major, an advisor recommended that I wait until sophomore year to get a major change. So technically, I’m just an English major. The College of Journalism accepts a D in macro; the College of Liberal Arts and Sciences does not.

I kind of just let myself go for a while after that.

Leaving the professor’s office with wet streaks down my cheeks and any hope that I had vanished. For the next several days, I holed into myself and basically gave up. After all, like the professor said, my prospects of passing was a stretch. I’m not quite sure what sparked a change in my mindset to just defy the odds and get that C that I needed. Maybe it was the ice cream and pick me up that my boyfriend gave me. Maybe it was the sheer thought of having to fork over a thousand dollars. Or maybe it was just the inner me telling myself to stop acting like a mopey little baby and get it done. Somehow, I started to push forward.

I ended up getting a 90 on a quiz, and then a 100 on another. Woah, look at that? A confidence boost just came. Then the final short writing assignment came, so I went to the TAs and got a friend majoring in finance to help me out. Score came in: a 90. Looking good, looking good. Finals week finally rolled around and I hunkered down at my computer. I dove into the world of macroeconomics—taking notes from missed lectures, watching the review session and practicing old exam questions. Afraid of missing the final exam or arriving late, I left my apartment over an hour early just in case. With a pounding heart and tightened chest, I studied while I waited for it to near 8 p.m. The final hour had arrived.

I took up every minute of that final exam.

I fact checked everything with my index card crammed with notes, definitions and graphs. Don’t ask how I fit everything on there. I still don’t know how I managed that. When I finished, I double checked my work and then triple checked. I labored over problems that tripped me up. I had to score at least an 85 on this exam to earn a C in the class. There was no other way. My body tensed when I heard the call for the last five minutes of the exam. Too afraid to let go, I held onto my packet. With just a few seconds on the timer, I rose from my seat and turned in my final exam.

With absolutely no idea how I did, I left feeling just as anxious as before. Walking into my apartment, I went straight for a shower and shampoo set to distract myself from the exam. With music blasting, I pushed thoughts of the results out of my mind. Climbing out, I heard a notification sound from my phone. Sure enough, the professor released the answer key. Hands shaking, I took a red pen and my test packet for the moment of truth. I got that one right. And that one. And that one. Wait a minute…I’m doing well. Counting up my missed answers in disbelief, I only got four wrong. Yeah, no.

I must have made some sort of mistake.

But I didn’t. I actually got only four wrong. Scratch that. I only got three wrong. The professor had emailed us soon after to inform us of an error in the answer sheet. What was C on the answer sheet was supposed to say D. And guess who put D? This girl. That A on the final ended up bringing my F straight up to a beautiful 75. My heart soared. I rejoiced. And with that happy note, I was more than glad to say goodbye to my macro final exam. Goodbye and thank you. 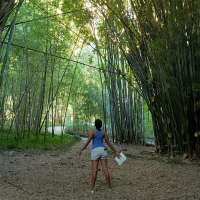 Alexa is a freshmen at the University of Florida. A lover for plenty of things from writing to film to working out, she struggles to pick favorites -- but she will try! Her ultimate career dream is to become a full-time, critically acclaimed novelist or writer.

I Graduated in Three Years, But Not Without Mishaps
Next Post: Top 10 Traditions at FSU That Prove You Bleed Garnet and Gold