You are here: Home / Life / Health / My Eating Disorder Was My Best Friend for Five Years

The real me was sealed in a tight box and left to starve.

A voice lingered in me. At meals this voice became especially loud. Put that rice in your napkin when no one’s looking, it told me. I obliged. People caught on and they took away my napkin. Stick it in your pocket, it cooed. So I did. The scale became my worst enemy but also a necessary anchor that I needed.

I wanted security from my eating disorder, but instead I pushed away friends, isolated myself, and snowballed into a deep dark hole.

When you look in the mirror, what do you see? When I looked in the mirror I saw two different people. One image was one of failure—of insufficiency, uselessness, contempt that needed to be “fixed” through control. The other was of an emaciated girl—numb from hunger, pale from malnourishment. I was alive but no longer living.

I was 14 when I was first admitted to the hospital for treatment. Like a growing piglet theyfed and fed me until I went to sleep and woke up with a rubicund face.

Refusal wasn’t an option. Don’t let them force you to eat that butter, the voice screamed. “If you refuse to eat all of that butter we will bring in the feeding tube.” They threatened to strap me down, to force feed me.

I felt trapped, lost, hopeless. Only later did I realize that these weren’t my emotions; it was the cry of my eating disorder slowly suffocating as I was challenged everything it told me to me to do.

Treatment didn’t help me. My eating disorder was smart, and I was its willing puppet. I was in treatment six times, all of which lasted for more than a month. My entire being became a walking illness, ready to lash out at whoever talked to me, even if they were just trying to help.

Paranoia clouded my vision as I felt like an insect stuck in a jar for everyone to speculate. People worried, and I reacted by gaining comfort from my eating disorder.

If I did 100 sit ups every hour for the entire day, every day, then I could appease the voice. If I ran seven miles one day, but too weak to reach the eighth mile, I forced myself to finish before collapsing right after.

Self-injury became consoling both physically and mentally. Treatment nourished my physical self, but the real damage was in my mental health.

I didn’t want to recover because I thought I would die if I parted with my best friend—the anorexia. So I held on to it stubbornly. Until one day, my eyes suddenly opened and I was blessed with a sense of clarity and a realization of what recovery meant.

It was exactly one week before my first day as a senior in high school. There was a chance that I wouldn’t be able to graduate if I was hospitalized one more time, and that almost happened.

Two weeks earlier my regular physician told me that I was steadily losing weight, to the point where I had crossed my threshold. I was going to be hospitalized for the sixth time during my last year of high school, and I was going to be held back one year to make up for all of my absences.

The eating disorder was my coping mechanism for all the challenges in my life. It filled a void that depression ate through and paradoxically made me feel better short-term. I wanted to be the perfect student and get into the perfect college. Perhaps it was pressure from my parents, high standards for myself, or a combination of both that drove me to a point where starving myself became the ultimate form of perfection.

How distorted and ill-minded it is to think that way?

So when my physician told my mom that she needed to take me to an eating disorders clinic that day, her face fell as if all of her efforts had gone to waste. Five years of monitoring me, encouraging me, challenging me, making sure that I wouldn’t engage in behaviors, and I had easily learned to outsmart her.

The anorexia betrayed everyone, including me, when it seductively whispered that I wouldn’t need to go back to the hospital as long as I listened to it.

“How long do you think she’ll have to stay here?” my mom asked the psychologist at Cambridge Eating Disorder Center in Harvard Square. She wanted the therapist to say a week, at most two, so that I wouldn’t need to miss school.

The therapist said at least a month, which meant that I wouldn’t be able to graduate that year. Somehow, the mere thought of having to stay back another year made my adrenaline levels shoot up so high that I ran out of the building, into the car and started devouring my untouched sandwich from lunch.

I had to prove to her that I could beat the eating disorder. I had to show that I was stronger and that I had something to fight for which was graduation. With the most desperate look I could manage, and the puffiest, reddest eyes she had seen, I begged her to take me home and that I would actually let her nurse me back to health. This was the real me.

When my mom heard and saw the sincerity in my voice, she knew that I had lightened my grip on the enraged eating disorder.

Senior year went by so quickly, as it does for most people. In late May I received my cap and gown. It wasn’t a perfectly happy ending. I continued to struggle with battling eating disorder thoughts throughout the year, and there were times when I thought I was going to give up.

Why did I want to graduate so badly, and how could I possibly want it more than anorexia? Because in those past five years I was completely blinded by an elusive, insidious voice that I fully put my trust in.

It wasn’t until the threat of loss—something that I valued more than anything else—that illuminated me, that made clear to me the two extremely different lives that I could live. One where I’d be in and out of hospitals, jobless and maybe even homeless, or one where I’d go to college and lived a successful, happy life.

I had to choose. It was the final straw. Now I am here.

I’m slowly learning to love myself and those around me. I am happier than I have ever been in the last five years. I still have a support system and I still struggle occasionally, but I know that as long as there is something to hold on to, if it means enough, then it will give me the courage and strength to keep fighting. 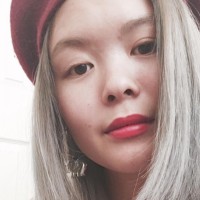 If You Think U.S. College Students Party Hard, You Haven’t Been to the UK
Next Post: What Working at a Writing Center Is Really Like