You are here: Home / Life / Study Abroad / The Low-Down on London

As if moving to a different state was not challenging enough to begin the next four years of my life, I started my college experience studying abroad. I’d just graduated high school when United Airlines Flight 930 whisked me away to a continent I had only fantasized about, and as a freshman nonetheless. 4,454 miles, a five-hour time difference and the Atlantic Ocean separated me from my permanent home in Florida and my temporary flat in London, England, where I studied abroad.

What do you think of when you envision London? Most likely you imagine a sense of romance in the way the fresh breeze flows in the West side and in the appearance of a quilted patchwork of old and new buildings in the city. Such history and innovation started to manifest my childhood Harry Potter-ridden dreams. Coming from a small town with a population 20,000, this city of nine million created an opportunity for me to experience more than just a conservative suburb in the Bible Belt polluted by Chevy trucks blasting twangy lyrics of guns and whiskey and carrying fishing poles and camo-printed Crocs.

Leaving a Christian suburbia where everyone could identify a favorite string of words from the Bible, I found comfort in London’s diversity. For instance, I remember students who were unaware of the American Japanese Internment camps during World War II. But London erased this, replacing it with a rich history of royalty and religion embedded into stained glass windows and orangey-brown brick castles. I forgot about the racist slurs and homophobic comments from that Southern town upon the welcome of black cabs and iconic red double-decker buses.

You’d think culture shock would only happen in a non-English speaking country like Spain, right? Think again. Although a predominantly English-speaking country, the differences between the cultural epicenter of London and the small suburbs I came from felt overwhelming. I’ve experienced things like different traffic patterns that have resulted in me nearly being run over on ~multiple~ occasions. And differing vocabulary included an awkward encounter with my friend who left to get some “rubbers” (meaning “erasers”). In other words? The culture shock has knocked down my front door, sat on my couch and kicked its legs up onto the coffee table. Even the water tastes different. I’ve noticed a sharper taste of metal in it. (I bought a Brita filter the second day.) For sharing a language, London feels worlds away.

These differences cultivate a refreshing distance, yet a distance nonetheless. Unfamiliarity translates into an interesting phenomena of missing that small town I once so fervently tried to leave. As glamorous as studying abroad feels and sounds, I can’t deny I missed home. I missed the familiarity of street names and the comfort of having my friends five minutes from my house. Rather than being able to drop by my best friend’s house on a whim or go for late night runs to the local diner, I had to plan Facetime calls.

But more painfully, I honestly missed my dog’s warm welcome-homes. And I’m not alone. “A challenge I’ve faced is home-sickness and missing all of the relationships I’ve spent so long fostering, but … I realized I can create my own community here,” said University of California-Berkeley freshman Sabrina Dong.

Being a freshman in a new city, let alone in a new country, is overwhelming, but so worthwhile. Giving my little blue monster named Fear a pat on the head and a “shush,” I embraced this life-altering experience and truly act as an adult for the first time. I cultivated important life skills from living in a flat with four of my best friends and having to cook and shop for groceries while juggling my studies.

For instance, while studying abroad you’ll likely learn how to navigate a foreign city without using a smartphone and learn how to communicate with the locals. “[It’s] an invaluable experience that makes one exponentially more adept at life, both as a student and as a global citizen. Navigating the already complex realities of college life while simultaneously immersing yourself in a foreign culture provides an enhanced experience that is simply unavailable elsewhere,” said University of California-Berkeley freshman Aaron Aranza. Living in a different country and acclimating to a new political climate—one that is much less American-centric—builds character. I don’t really think a regular college experience prepares you for that like studying abroad does.

Most of my learning experiences root in my interactions with the locals. One time I asked for “take out” rather than “take away” and the waiter looked like I was speaking in hieroglyphics. Or my first day here, I accidentally left a 20 percent tip at a restaurant, but no one expects tips. Asking for a side of “chips” and receiving steak-cut french fries was not ideal either. The french fries were pretty good, however.

These mishaps that resulted in a red face and lots of “I’m sorry’s” brought me out of my complacency in the States. One lesson you learn while studying abroad is that assimilating to a new culture, however similar or different, is a learning curve. A norm you have experienced your whole life, like flicking light switches up to turn lights on, is challenge. You begin to realize that there is no real standard for normal.

Challenging? Yes. Impossible? No. “The best approach towards new experiences lies in keeping an open mind towards the outside world while honing my own personal views. As a still-developing person, I see college as a place to find opportunities to utilize my potential,” said University of California-Berkeley freshman Mecklit Terefe.

Collectively, as a study abroad community of nearly 50, and individually, as a Berkeley freshman, maturation evolves as an underlying theme. Although disheartening to miss out on so much of the typical freshman experience like Homecoming and pledge season, I’ve developed an invaluable sense of self and gained a unique perspective on life outside of the college bubble. Adjusting to new social norms in a different atmosphere is daunting. And the first week is filled with a lot of pinch-me moments, but I’ve gained a greater global insight into humanity. Even though it has been an abnormal freshman experience so far, what about life is ever normal? 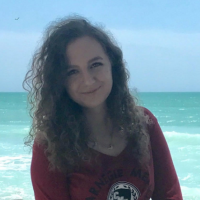 Evelyn is a freshman at the University of California, Berkeley and hopes to major in international relations. With a passion for politics, you'll often find her binge-watching Scandal. If she's not, she's most likely producing short films, petting dogs, or drinking chai tea lattes.