You are here: Home / Life / Dating / I Fell in Love with the Boy Next Door

I never meant for it to happen. I never really expected much to come from our hanging out a pre-orientation. David was a nice kid. I figured we’d be acquaintances, but like everyone always says, “You’re going to meet a lot of people when you first get to school. Be friendly to everyone, but don’t expect to be friends with them forever.”

But when I ran into him on move-in day and found out that he was my neighbor, that all went out the window.

I couldn’t complain, though. We hung out on campus over the summer during the “summit” program for the new students, so he was a familiar face, and we got along well enough. And besides, he was my next-door neighbor. It’s always a good idea to be at least sociable with those that live around you.

The first week was filled with free time and floor-wide activities, so we spent most of our time together. It was easy enough to just knock on the wall or go to the door and ask if he was up for lunch or even the zoo. We stuck together, going to the welcome events on the quad, meeting people on the floor,and reconnecting with other friends from our pre-orientation program.

Soon, classes and clubs started. But our time together didn’t stop. There was always a knock on the wall or door to ask if I wanted to grab some lunch or study. When I experienced roommate issues, he welcomed me in as an unofficial roommate. Over time, and more often than not, I could be found in David’s room, hanging out, doing homework or watching documentaries on the U.S. presence in Afghanistan.

I can’t pinpoint the exact moment when I realized my feelings, but I know it happened early on. At first, I tried to push it off, justifying it with, “He’s just being nice, Lily. You can’t think that every guy who’s nice to you likes you.” But as we hung out more frequently and got closer, I found my feelings growing.

On a Friday night, right after classes started, I realized that there was no turning back. We had gone into the city to go monumenting and I couldn’t help but feel like it was some type of date. It was weird but… exhilarating. I’ve never been in a relationship before, or even on a date. So to me it was almost magical.

After that, it was an uncontrollable descent. My feelings kept growing and evolving until they were too big for me to bear the burden alone.

One night, David and I were hanging out in our friend’s room when a girl on his floor showed up. She was in David’s economics class and wanted to ask him for help. Right away I noticed something. I hate to admit it, but I felt jealous. And jealousy makes you realize things.

After a while, David left to work with the girl on homework, leaving me with our friend. I told him everything. He, in return, gave me the truth. David had a crush on the girl in his economics class. I felt heartbroken until he said that he’d talk to David about it. Still, he encouraged me not to get my hopes high.

In all honesty, I prepared for that response and what followed.

I’m not going to lie; learning the truth devastated me. But I’ve learned over time that there’s no use in holding on to heartbreak. You’ll only make yourself miserable. Given that we lived near each other, giving myself distance sucked. But over time it got better.

He knew I felt upset and respected my need for space. But he never stopped looking out for me. My roommate difficulties flared up not long afterwards, but luckily, I counted on my already-strong friendship with David for support. It was at times pretty challenging to separate my feelings from our friendship, but since then I’ve been able to heal. Our friendship has grown only stronger.

I moved out of my room a few weeks later. We were both upset at the separation, but as they say, “Distance makes the heart grow fonder.” We still hang out often, grabbing food or studying. There’s no knocks on the walls, but there are still plenty of texts. And there’s a lot of happiness, too. I may not have ended up with a boyfriend, but I did end up with a best friend. Frankly, it’s more than I could have ever hoped for. 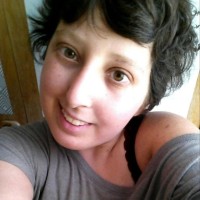 A Queer Girl’s Perspective on Valentine’s Day
Next Post: A Grooming Guide for Hot College Guys