You are here: Home / Life / Freshmen / Living a Double Life: Life as a First-Generation Student

I am living a double life. It’s nothing like Hannah Montana, although I wouldn’t complain about the luxuries of living the rock star life by night. I don’t shoot webs from my wrists or hold superhuman strength like Peter Parker or Clark Kent, but much like any other first-generation teenager, my life splits into different worlds.

For me, it’s balancing my American and Cuban identities.

At home, I eat rice and beans, speak Spanish and crave cafecitos. The moment I step out of the door however, I am “American.” I own Victoria Secret Pink leggings, crop tops to match and carry Starbucks in hand. For a long time, I mastered this double life so well that all it only took a mental switch. With one neuron transmission, my “superhero” outfit masked my Hispanic side. However, it all fell apart when living this double life led to an identity crisis.

I remember the moment it became clear to me. While at a family party, I contrasted my family’s loud and vibrant mannerisms by sitting down with my headphones. I was 14. While the rhythmic salsa blasted around me, my brain jammed out to American music. My uncle came up to me and said, “Why don’t you dance with us? You’re not going to be like the American kids who don’t know how to dance, right?”

Out of guilt, I joined them. But that interaction led 14-year-old me to a realization. I needed to keep up this double life if I wanted to avoid getting my Cuban identity revoked. At family gatherings, they expected me to know the beat of every Marc Anthony song so it would match up with my steps. They expected me to listen to Spanish reggaeton like my brother, and resemble the poster child for “hispanidad,” all while maintaining my American side so that I wouldn’t miss out on the things the kids would talk about in school—so with this, I kept both.

But it couldn’t last.

While at college, I dove into my American side. After all, my Hispanic side never taught me what I should expect in college, so I needed to rely on the other. For two semesters, I swam through the world of my American side. My dinners no longer consisted of rice and beans; instead, they were Chick-Fil-A. Every time I hopped in my car, the Spanish radio wouldn’t take over. Instead, Spotify played my top hits. My only connection to my Hispanic side slowly chipped away by the distance between college and home. The conversations with my family over the phone stood as the only thing keeping it intact.

Once I got back home for the summer, I had the time to catch up with my family again. It came time to hit the mental switch, transforming me back to Cuban. However, I didn’t completely transform. My superhero mask tore, and suddenly everyone could see both sides. I lost my switch. I paused my sentences as my mind scoured for Spanish translations—translations stored in my memory for years now gone, replaced by English words.

My American side colonized my Hispanic side.

Coincidentally, the very same uncle who guilted me for listening to American music decided to join me again. “I can’t believe you’re losing your Spanish,” he said. It gutted me. How could I be losing my Spanish? Spanish was engraved in me. I spoke, thought and read in Spanish all my life. I knew Spanish. No, I know Spanish. Don’t I?

For the rest of the night, I forced myself to think in Spanish. I pushed my brain to dig for fancy Spanish words to prove that I wasn’t losing my language. I took every opportunity I could to speak that night, but somehow when I did, my struggle became clear. I opened the door to my American side, and I evicted my Hispanic side without realizing it. I spent the rest of the summer proving I didn’t lose my Spanish and the culture that came with it.

This identity crisis helped me come back to my roots stronger than ever before. It took me losing my Hispanic side to realize that I didn’t need to live this double life. I shouldn’t fear becoming too American for my Hispanic side or too Hispanic for my American side. There’s a gray area where I can exist with both identities and not renounce one for the other. That’s the thing about being a first-generation student: there is this unspoken fear that by allowing new cultural experiences, you must let go of the other. That sometimes you find yourself in a foreign area where you don’t fit into the “American” umbrella or the “Hispanic” one. In reality, we create pressure to fit in by ourselves. We need to realize that to be “American” is to be both. 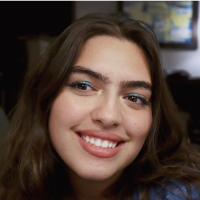 The Cover Letter: Your Secret Weapon into the Professional World
Next Post: How to Get the UF Experience: COVID-19 Style