You are here: Home / Life / Jet Lag, Swollen Feet and Other Things I Love About Christmas

Christmas doesn’t come every year in my family. It’s not a time where we hang a wreath on a door or put a star on an evergreen tree. Christmastime doesn’t involve singing carols while making cookies or opening presents while wearing pajamas. To me, Christmastime is simply a synonym for family time, which means it’s usually in the summer.

Living away from family is actually not uncommon in America. Like numerous other students who grew up in the U.S., besides the nuclear family–mom, dad and brother in my case–all of my other relatives live in another country. So, when family is thousands of miles (and dollars) away, it makes “going home for the holidays” a little bit more difficult, especially in college.

Because my family lives in China, my winter breaks and summer breaks don’t line up with theirs. Winter break in the U.S. revolves around Christmas and the New Year, but winter break in China depends on the Lunar Calendar for Chinese New Year, meaning it can vary anytime from January to February. Because of the mismatched vacation days, I usually visit during the summer. However, ever since college began, I can’t really think of summer as summer anymore. It’s a time for taking extra courses, balancing internships and trying to not fall behind on the journey towards adulthood. As my pressures and responsibilities increased, my available time to visit family decreased. It became so difficult to find an opportunity to travel to China that I decided to forgo the idea completely, at least for the duration of my five-year undergrad career.

But five years is 1,825 days. And every time I get homesick, I tell myself, “Just five years. Five winter breaks until you can spend Chinese New Year at home. Five summer jobs until you can make dumplings with your grandma.” However, during the spring semester of my sophomore year, I received news that my cousin was getting married the following September. Who doesn’t love a wedding? Unlike Christmas or Chinese New Year, this family event would not be an annual affair. Suddenly, flights were booked and I had five days in China. Five days to create five years’ worth of memories with my family. Five days to pack in five Chinese New Years. Five days to squeeze in five “Christmases.” I was no math major, but even I knew it was impossible to draw an equal sign between the time I had and the time I wanted.

With that in mind, I began my junior year by emailing professors about missing class and asking for assignments in advance. It wasn’t the most ideal way to kick-off the school year, but between unparalleled determination, endless amounts of caffeine and three all-nighters, I somehow managed. And when my plane took off for its 13-hour flight, I couldn’t help but sing to myself, “Oh, there’s no place like home for the holidays.” After all, even though it was September, it felt like Christmastime to me.

When I landed in China, my five-day countdown began. Though my time there sped by way too quickly, it wasn’t all quite a blur. Instead, my time with my family felt like snapshots. The joy and the tears in my aunt’s eyes when I surprised her from behind at the airport. Click. The laughing faces of my uncle and my grandma in the car when we were stuck in traffic. Click. My cousin’s three insanely gorgeous wedding outfits, varying from a western-style ball gown to a traditional Chinese qipao. Click, click, click.

And just like that, my five days were over. Did my heels rub my feet raw for ten hours the day of the wedding? Yes. Did I ever recover from jet lag at all? No. But even those moments were snapshots I treasured because I only had five days to celebrate five Christmases, and I was going to cherish every, single second.

Like my time in China, my time back on campus flew by as well. But unlike China, school was actually a blur. Midterms came, finals went and suddenly it was December. Sitting with my mom, dad and brother at home, I couldn’t help but feel a bit jealous after seeing pictures of grandmas baking cookies and little cousins ripping open presents. However, as I scrolled through the snapshots in my mind of the five days I had in China, I couldn’t help but think that Christmas—no matter when it comes—is truly the most wonderful time of the year. 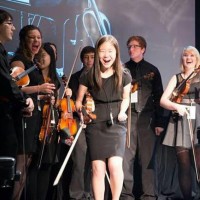 Ruiqi is a senior studying English and Communication Arts at the University of Wisconsin-Madison. Her most recent accomplishments include getting ready for work in 10 minutes and beating a 9-year-old in a casual hula-hooping contest. She hopes her skills will be of use to society someday.