You are here: Home / Life / Study Abroad / I Traded the U.S. Capital for a Japanese Rice-Farming Village

When most people picture Japan, they think of Tokyo. They imagine neon lights over epic shopping districts, girls in colorful Harajuku fashions strolling the streets and billboards plastered in wide-eyed anime characters selling weird products like seaweed flavored toothpaste. And that’s kind of fair. That all exists. But I didn’t go where all of that is for my six weeks abroad.

I went out into the quiet, rice paddy-covered countryside.

Akita International University is in Akita Prefecture in northern Japan, about four hours from Tokyo by bullet train. I could’ve studied in Tokyo itself instead, but I figured that AIU provided a good opportunity for me to go somewhere that I would otherwise never see. And anyway, I go to school in the middle of Washington, D.C. I spend plenty of time in the city. After growing up in the suburbs of Indiana, I wanted to see real life for my Japanese counterparts in the countryside.

As soon as I arrived on campus, however, it became clear that I put myself even farther from civilization than expected. The bear bells marked my first clue.

The school gave all the study abroad kids bells to put on our backpacks to keep the bears away. As if this didn’t worry us enough, the year-round students soon warned us that they were essentially useless. “The bells attract the bears,” my roommate told me. “You know, because they know people carry food. Best to go quickly and quietly. Or just don’t go out at night.”

I slept for the duration of the bus ride from the train station to campus. I didn’t realize where I really ended up until I laced up for my first run around the area. To the north of campus? Rice fields and a few houses. To the south of campus? Mountains and eventually a river. And that was it for over two miles in either direction.

The isolation felt pretty daunting at first. I mean, if I did get mauled by a bear, how long would it take for an ambulance to get out this far? And more importantly, where would I buy snacks? Luckily, during orientation they gave us all the scoop on the bus system. We could take two buses: one that went to the train station and one that went to a nearby mall.

Every weekend my classmates and I took the buses one place or another to explore. A visit to the mall became an event in and of itself—malls seem to do much better in Japan right now than in the U.S. This massive thing towered high at five floors, with a movie theater, a food court and an arcade.

When we really felt like exploring, we went to the station and took the train to Akita City, the prefecture capital. This good-sized city offered plenty to do, from a seven-floor arcade and sports center combo to countless shops and restaurants.

But our favorite thing in the city? The onsen, or hot springs. For less than eight bucks, we could spend two hours in a facility with indoor jet pools, outdoor springs, a steam room and a sauna. It felt like heaven.

The school, well aware of its unique location, organized plenty for us to do on and around campus to get in touch with rural Japanese culture. I learned about the traditional Japanese tea ceremony, how to do calligraphy with a brush and ink and even how to put on a kimono (but not without help—it’s harder than it looks!). All of the locals, including the students, were friendly and excited to teach us about the side of Japan that you don’t see on TV.

One of the most charming experiences of the program was when we took a bus trip to the neighboring prefecture. We visited an old samurai town steeped in medieval history. We slipped off our shoes and walked across creaky wooden floors traversed hundreds of years ago by actual samurai, and watched a man make the same kind of wooden crafts by hand that those same samurai would have made in their spare time all those years ago.

As if the history wasn’t enough, we always found amazing and occasionally very strange foods throughout that whole trip. I tried three different ice creams that day; sakura, or cherry blossom ice cream, which tasted delicious; “baba” ice, a flower-shaped ice cream named after the word for “grandma,” because little old ladies always serve it (no, for real); and shoyu, or soy sauce ice cream, which shocked us with its sweet and yummy flavor.

Had I eaten nothing but ice cream that day, I would’ve rated my culinary experiences for the day a 10 out of 10. Unfortunately, adventurousness can sometimes lead to disappointment. Couple my very limited Japanese vocab with pointing at things and hoping they taste good, and you’ve got a recipe for eventual disaster.

We stopped by a seaside strip mall-type place on a peninsula with a gorgeous view of the ocean. The whole scene just put me in the mood for seafood. So I went up to a little shack selling skewers of little things that looked like some sort of mollusk (maybe? I’m still not sure). I ordered two of them, a little optimistically.

Five little round clumps of meat hung from each skewer. Each chewy piece forced me to take a full minute to grind it up enough to swallow. Of everyone that got the skewers, I was the only one who forced them all down. But I probably shouldn’t have. They tasted like rubber and seawater, a taste that I could feel in my throat for hours after. So, okay, not the best experience. I guess that’s just one of the caveats of stumbling around a country whose language you barely know.

Would it have been nice to see some of the more famous Japanese landmarks? Sure. I would’ve loved to wander the bustling neighborhoods of Tokyo or spend more time exploring the famed shrines of Kyoto. But I know that I can always go back to those places. I don’t know if I’ll ever go back to all of those random little towns I saw in and around Akita, each one with its own little quirks and histories.

If I study abroad in Japan again, I’ll probably go to a large city like Kyoto or Tokyo. But I’m happy I spent some time in the country first. The whole experience grounded my perception of Japan in a much more real place. And I never even saw a bear, so it all went down a lot smoother than students led me to believe on day one. 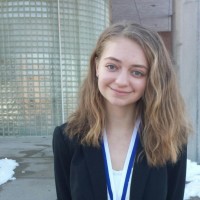 How Working at a Grocery Store Prepared Me for College
Next Post: What I Wish My Younger Self Knew Was OK in College