You are here: Home / Life / I Am Not Just Your Lesbian Friend

Not many experiences leave me speechless. Like many other girls standing barely five feet tall, I bring my Napoleon Complex wherever I go. Normally I’m the loudest in the room. But several events last week brought me to silence.

The first incident happened at McDonald’s around 2 a.m.

I went with a close friend and another girl I had recently befriended. I met them both through my college paper. The newer girl messaged me and my friend to come over out of boredom. I guess as stir-crazy late-teenagers, it took no more than an hour to mention the fast food joint that sat across the street from her dorm building.

As we soberly waited for our fries among the crowd of drunken college students, I found the perfect moment to make a gay joke. Referencing that it happened to be Lesbian Visibility Day, I made a joke that in these situations I wished to be left invisible.

My closer friend chose to laugh, as expected. The other girl didn’t. Instead, she responded, “You talk about being a lesbian a lot.” I looked at her dumbfounded. I should’ve said something like, “That’s the first time I heard that in all of my out years.” But I said nothing. I don’t know how anyone would respond to that.

After about an hour, my closer friend and I parted ways with the girl. Still, I couldn’t stop thinking about what she said.

It’s no secret that I’m a gay woman. Somehow everyone seems to find out, whether I disclose it or someone else mentions it. Coming out in eleventh grade did change my life in some ways. I joined the Gay-Straight Alliance for a year, which ironically included mostly straight individuals. It also gave me my one navigation joke that I can’t go straight but I’ll try my hardest. However, I didn’t think it was the focal point of my personality.

Imagine my surprise when one of my other friend later in the week told me that when we first started hanging out he referred to me as his “lesbian friend.” He then said he refers to me now as his “reporter friend.” I shrugged it off, said thank you and changed the topic of conversation. I never was mad at this friend, but I just thought he saw me as more than my sexuality or the one aspect that made me different.

I grew leaps and bounds from my high school self in my freshman year of college. Most importantly, I learned not to be ashamed of sexuality.

After these two moments, however, I thought about if I let this minor part of me became a major part of my identity. Was this how people saw me? Or did I, myself, start using my sexuality as something to make me interesting? Or as a crutch as I met more people?

I felt scared to talk to anyone else about this, fearing that bringing this up would just be a way to talk about my lesbianism some more. Despite my hesitation, I found comfort in my closer friend who was at the 2 a.m. McDonald’s trip.

I brought her my concerns. Two minutes into the conversation she stops me.

“Mikayla, you really don’t talk about it that much unless it is relevant to the conversation,” she said. “I feel like people bring up that you’re a lesbian more than you do.”

Her response surprised me because I probably talked about my sexuality with her the most. We often confide in one another about our college relationship struggles. In my case, of course, that involves women.

From here, we talked about moments where other people brought up the fact that I’m gay. For example, over dinner, a mutual friend asked for my coming out story and then compared me to a lesbian from pop culture.

After that conversation, I thought back to the year and all the similar incidents. Some of my favorite statements were: “You’re my favorite lesbian” or “Do you know ‘so and so?’ She’s gay.”

I realized I’m probably going to deal with similar situations for the rest of life. Every time I meet someone that finds out that I’m gay, they might chose to represent me with only that label. Being gay makes me different until they find out other aspects of me that make me stand out.

At the end of the day, I’m okay defining myself as a lesbian. But I still want to be known as caring, kind, hardworking—and for my Napoleon complex, first.

I am not just a lesbian friend. But it may always start out that way. 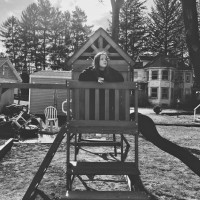 Top 10 Colleges For Surfers
Next Post: 10 Things They Won’t Tell You at University of Florida Preview