You are here: Home / Student Travel / How to Effectively Communicate with All You Encounter on Life’s Adventures

Late for your class on your semester abroad, you frantically attempt to find your way to the proper lecture hall. You instinctively search Google Maps, but forget that your service lacks reliability in a foreign country. As a last resort, you must talk to a local in order to find your way around.

This can seem extremely daunting, but with the following tips, you’ll feel like a communication expert in no time.

Bring Confidence to the Conversation

Approaching a stranger while alone in a different country can certainly seem like an impossible task, especially with a language barrier. Even so, approaching people with confidence will surely serve your needs. “The basic issue is just to have confidence,” UCLA Communications professor Greg Bryant said. “No matter how the interaction goes, it’ll play out more successfully if you approach it with confidence.”

Bringing confidence to a conversation can manifest itself through subtle body language cues, like maintaining eye contact and smiling. “I think holding an open posture and looking people in the eye when communicating will help. Just act natural and relax,” Bryant said. Although you may not necessarily get the answer you need just by appearing confident, confidence will certainly allow you to get a step closer. So stand tall, smile and approach your helper of choice with a casual smile.

If unable to communicate fluently in another language, you may feel like your conversational partner doesn’t understand anything you say. However, if you follow the general rules of human communication ingrained in all of us, you’ll surely get your point across. “Regardless of where someone goes, human interaction rests on a fundamental set of norms and practices across communities and cultures,” UCLA Sociology professor Giovanni Rossi said. According to Rossi, regardless of culture, there exists a system of rules, such as a system for fixing conversational problems.

If your conversational partner doesn’t understand you at first, don’t fret. “In a scenario where students go to another country where they don’t speak the language, even some little words that we don’t pay much heed to like, ‘Huh?’ actually turns out to be a very common and stable little word that you’ll find in any language. Wherever you go, your helper will be able to understand they need to repeat their answer,” Rossi said. For example, if lost, you can easily point to a spot on a map and ask “Huh?” to crudely demonstrate that you want to get to that spot on the map. Rudimentary communication skills like this will go far, as many of the communication norms we take for granted actually stand as universals. As such, remember the common conversational rules you follow subconsciously while speaking in your first language; these will likely still prove effective in communicating in a foreign country.

When in a foreign country, consider learning a few basic phrases, as this will make your ability to find a willing helper easier. “Having moved across countries a number of times, I know learning foreign languages is hard. For English native speakers, they often don’t need to because they’ll find people in the host country who wants to practice English or has learned it,” Rossi said. “Maybe learn the basic forms of greetings and partings from conversations, and the word for ‘thank you.’ Those are the easy ones, usually. Even just using those once or twice gives a signal to your interlocutor that you’re not just assuming that English is all across the world, and shows you’re making an effort to meet them hand in hand and that you have an interest in the local language.”

Before your trip, consider picking up Duolingo or practicing a few greetings on Google Translate. Although you won’t suddenly speak fluently in a new language, you’ll at least have a few phrases under your belt to show the effort you put into living in a new country. “In many countries, people are very welcoming of foreigners who come in and make an effort to learn the language and local customs and will be very supportive of you trying,” Rossi said. By putting in the work beforehand, your conversational partner will not only recognize your effort, but will likely help you in the best way they can.

In addition to phrases, make sure to research a few key differences in body language-based communication, as some countries have drastic meanings for body language cues. For example, nodding one’s head up and down may seem like a commonly accepted response meaning “Yes,” but in countries like India, this gesture means the exact opposite as it does in the U.S. “There are differences among different western languages and cultures, with slight differences,” Rossi said. “Outside of the western world, things can change quite substantially.”

Remain mindful of these differences, possibly including this in your pre-trip research as well. Understanding the basic differences in nonverbal communication will help you avoid miscommunication and help you receive the answer you need while avoiding any hiccups.

When in a foreign country, miscommunication will likely happen. “There will be mistakes, something silly and not competent, and that’s part of the game somehow,” Rossi said. “We usually perceive way more judgement or attention on our mistakes than there actually is. Your interlocutor will be mostly focused on what you put into this rather than any small mistakes you make.”

Don’t let the inevitability of mistakes deter you from going outside your comfort zone to talk to strangers in a new place. Talking to new people will give you a richer experience than you would get from simply googling the answer to your question. “It’s just good for your social mind to interact with people regularly rather than interacting with a computer. Through practice and experience, you enhance your social development,” Bryant said. Communicating with new people can benefit you in unexpected ways, as you’ll gain wisdom you wouldn’t otherwise gain by opting for a quick Google search. 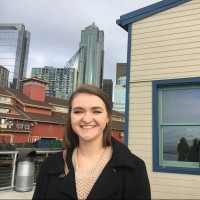 Ready-Made Friend Group: How an In-State Roommate Blessed this Out-of-State Freshman
Next Post: 10 Cheap Ways to Surprise Your Girlfriend