You are here: Home / Advice / How A TikTok Trend Made Me Reflect on the Lives We Miss

I’m graduating in a semester (let the internal screaming commence). After all, we spend 12+ years in school—how could I possibly just jump from school to the real world? Like, okay, yes, I did earn a degree. It’s a great start, I know. But the plethora of routes a person can take with a degree steadily decreases as you keep going to school. That’s why I’m not jumping into grad school right away; in the words of one of my fabulous deans…

“You don’t want to pigeonhole yourself into one career if you don’t know where you want to land exactly.”

There’s no shame in not being sure where you want to end up. A whole big world hangs just on the other side of your degree! That’s enough to make anyone nervous. I know I want to be a writer. It’s my strength and my pleasure—but what about my other interests? I happened to be fretting over this myself when TikTok decided to unleash a new trend.

Everyone knows that TikTok trends come and go like the wind. Anyone else remember Pudgy? While his “owa owa”’s still make me giggle after all this time, a new fad that recently came and went made me reflect a bit. Does the trend where you list the different types of lives you want to live ring a bell to anyone?

Set to some fantastic instrumental music, this trend highlighted a user’s desires for a variety of lives beyond their own: including careers, homes, and some fantasy options thrown in.

But for me, this trend brought me back to a simple question—what life would I want to live if I didn’t need to worry about anything?

A few pop into mind, including the one I’m currently pursuing. Being a writer. Creating worlds and characters and scenes that will stick with a person as they move through life. I happen to agree with the sentiment that the best thing you can do in life is bring someone away from their current reality, even if just for a little while. The world can close in on a person, so much so that they just want to run away.

I find that writing helps ease burdens that can sit on someone’s chest, just like movies or music. So, yes, this first option remains my goal for my life—but I still find myself wondering about the other routes I could take.

It’s my second passion after writing. While my college offers a variety of things, musical theater never made that list. After being wholeheartedly consumed by it in high school, it felt like a little bit of a punch not to be able to pursue it in college, even if it just remained a hobby. The daydream of singing under stage lights with a choir behind me and a sea of people in front of me—that would be my second life.

Couldn’t you just imagine it? The colorful lights of Broadway greeting you as you sneak backstage through the cast door to warm up, to giggle over a joke with castmates and feel the inexplicable joy after a show well done? I could almost taste the well-earned meal after a long night on stage.

Then comes my more scientific attraction: marine biology, environmental conservation, helping the planet move away from the brink of collapse thanks to the climate crisis.

I loved watching The Crocodile Hunter as a kid. Also, I am just obsessed with Shark Week. I tell my friends when it rolls around in the summer that I’ll see them in a week. I love the ocean and I respect its creatures with the utmost regard: that’s why it devastates me to no end when I see bloody plastic straws pulled from the nose of a sea turtle, or when I see plastic in the stomachs of dead whales, unable to break down the bags and bottles that they unknowingly ingest.

After all, this planet doesn’t just belong to humans—although a good portion of humanity might believe that to be so. I could see myself pulling garbage from the ocean, rescuing innocent animals, advocating for the protection and preservation of our planet.

These lives: a writer, an actress, a scientist, an advocate—they only come as a small portion of what I would like to do in life.

That’s sort of the terrible thing about life: you only get one. Cheesy, I know. But I could spend an entire lifetime writing in cozy cafes in Ireland or starring in Broadway shows or monitoring the decay of our polar ice caps in Antarctica. I could make a stand at the United Nations on behalf of my planet like Greta Thunberg. Or star in a movie, or take over a court room with my legal knowledge and killer fashion taste.

I know I won’t be able to do it all. But I could do a lot of it. I’m already combining my writing with raising awareness about the climate crisis. I could definitely try to be a climate reporter. Hey, I could also be an author. I could try to find a theater group that I can join somewhere to feed my musical side, and I can volunteer to clean the beaches. It’s strange how a TikTok trend could bring on such a heavy amount of reflection, isn’t it?

I won’t be able to do it all. But I’ll curse myself if I don’t try. 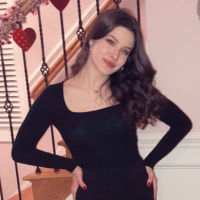 Jillian is a senior studying Communication Arts at St. John's University. She has a soft spot for Broadway musicals, Marvel, and vintage film icons.

Top 10 Colleges with Libraries Every Bookworm Would Love to Attend
Next Post: 10 Modern Classics Not Written by Dead White Guys