You are here: Home / Life / Dating / Halloween Isn’t the Only Time for Ghosting Anymore

You heard it right: ghosting happens all year-round. Growing up, my friends would drag me on ghost tours where I heard chilling stories that kept me up all night for days.

But I never thought that I’d personally meet a ghost.

At age 18, I began my freshman year at the University of Florida. I always romanticized finding a boyfriend in college, and I craved the freedom to spend time with him without my parents watching me like a hawk. At one of my first college parties, I met a guy who seemed perfect on paper. His charming persona combined with his fluffy brown hair and wide-eyed smile made all the red flags magically disappear.

We not only talked about our majors and hometowns, but how excited we felt for freshman year. I mean, sure, he asked for my Snapchat instead of my phone number… And he kept asking if I wanted to “go somewhere quieter”… But those red flags definitely did not look as crimson red at the time. Long story short, we sent some Snapchats back and forth to each other over the next few days.

He always answered instantly by asking about my day and my experiences in my classes. We talked about our friends and our hobbies, along with what our families were like. We even began making plans for later in the week. I became attached to the Snapchats I received from him, and I told my close friends about all of the cute messages he would send me.

Then all of a sudden, I saw those dreadful words under his name that read: “Opened three minutes ago”.

He’s probably just trying to take a good Snapchat to send to me, I thought. I checked again: opened one hour ago. His phone definitely died, I convinced myself. I checked one last time: opened six hours ago. Yikes. It would seem desperate if I sent another Snapchat back. I waited. I excessively kept checking my phone every thirty seconds, but nothing ever changed. Perhaps I said something alarming? A million thoughts raced through my head. Yet sadly, I endured what almost every college girl experiences. I got ghosted.

I am confident in saying that at the time, I genuinely believed the world most definitely conspired against me. UF comprises of approximately 50,000 students roaming the dining halls and classrooms. And I know after hearing that number, it is easy to anticipate that there’s no way she’d run into the guy who ghosted her. As much as I appreciate this uplifting state of mind, I’m here to tell you this certainty wasn’t my case.

If you feel inclined to know anything about me, you should undoubtedly know that I go to the library, a lot. For me, the library feels like a safe haven. A place where I can study with my friends, inhale iced coffee and cry maybe a little too much during exam season.

That said, you’ll understand why my heart sunk to the floor when I spotted the guy who ghosted me sit three chairs away from me in MY safe haven.

It obviously didn’t click in his head at first, but when we both made eye contact for the first time, I felt a hot flash of embarrassment envelop me. We exchanged this super awkward wave, and I recognized the instant look of regret in his eyes for sitting in that particular chair. To avoid any more awkwardness, we stayed grounded in our seats, obviously making it even more awkward than it originally felt. I only stayed for another half-hour or so before high-tailing it out of there without a backwards glance. To this day, I never saw him again.

Now, as a sophomore, I can candidly say that getting ghosted and even ghosting others embodies a natural part of the college experience. It prevails almost like a rite of passage. Everyone goes through it. Even though back then it felt like the end of the world, now my friends and I love laughing about all the oddly similar stories we experienced. So, if you’re ever waiting for a Snapchat back or wondering where the situation went wrong, remember that those hysterical and amusingly funny moments with your friends are guaranteed in the future. 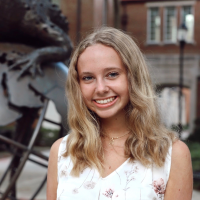 Gabbi is a sophomore at the University of Florida studying journalism and political science. She loves meeting new people and traveling, and she aspires to attend law school in the future.

And Suddenly, I Found Myself Living With a Stranger
Next Post: Islamic School to Catholic School: A Mile Away, But Worlds Apart