In September 2009, a bright-eyed 11-year-old girl named Michelle* walked into her first sixth grade science class. The class started with every student introducing themselves with their name and what they wanted to be when they grew up. When it got to Michelle, she said she wanted to become an engineer. The other students in the class chuckled under their breath.

In an attempt at consolation, her teacher told her, “It’s okay honey, engineering is really hard. Maybe you can be a nurse or a teacher?” Michelle simply nodded her head and remained silent for the remainder of the class. Sounds familiar, right? Having women in STEM fields…oh no, that could never happen.

It’s no secret that historically, males have dominated the science and engineering fields, causing the creation of a gender gap. But is this long-reigning gap beginning to reverse?

Take Michelle, for instance, now an engineering major at Boston University. Although growing up her parents and teachers told her to pursue careers like nursing, she didn’t back down. Despite her worries, the first few months of her first semester were all it took to reassure her that she’d made the right decision. She saw that her gender didn’t hinder her chances of success. “The engineering students and faculty are so supportive of each other, regardless of gender. There is no discrimination or bias. We are seen by our abilities rather than whether we are male or female. We push each other to be better,” she said.

But why is this only a recent trend? Why do women who pursued STEM in college decades ago, such as Eileen Pollack, reminisce about the harsh gender discrimination they faced while women today have increasingly opposite stories?

It might have something to do with how Generation Z sees a much larger value in gender equity. In a survey of 50 Boston University students, an overwhelming 85 percent of students thought gender should have no affect on someone’s education, career or overall life experience. Even cooler? The pre-existing world with strictly enforced gender stereotypes is shattering. Women can be engineers. Men can be stay-at-home dads. Today’s college students are more determined to achieve gender equality than any past generation.

Universities across the nation have promoted women pursuing STEM majors. They’re including specialty housing and fostering extracurricular activities to try and allow women in STEM to facilitate relationships with and encourage each other. Not that they’re 100 necessary, because things are improving.

Michelle personally did not need to participate—she was able to make friends with both the men and women in her major. “The girls don’t have to band together against the guys just to achieve equality in their fields. Everyone respects each other as friends, students, and colleagues,” she said. “You see men and women as lab partners, doing joint research and internships together. I think now more than ever people are beginning to realize that in order to advance in science, they need all the brainpower they can get regardless of gender.”

Is that inspiring or what? Michelle’s story illustrates how college culture is moving forward into an era that focuses on quality of work and ability rather than the “M” or “F” on your birth certificate. Clearly students have started to realize that in order to make advancements, they need to collaborate. People have become more accepting and communities have, on their own, developed a more welcoming atmosphere.

Why does this matter? What does a shrinking STEM gap mean for the future? It means a world where men and women can equally pursue and contribute to these fields. It means that more girls will have the confidence to major in STEM in college.

I am one of those girls. Throughout high school, I discovered my passion for the sciences but often found myself the only girl in upper level courses. Unlike Michelle, I had teachers and parents who supported my goals to pursue STEM. Though I found myself outnumbered in upper level science classes, I was never discouraged. I knew I wanted to contribute to science. I wanted to go into medicine and be able to help people.

In 2016 I enrolled at BU as a human physiology major. To my delight, I’ve witnessed firsthand how the gender gap in STEM is shrinking. Never have I experienced any kind of gender related bias from a peer or an instructor. Every day, I see people of all genders and backgrounds working together to make achievements in the sciences.

The gender gap in STEM won’t close overnight. This ongoing process needs to continue in order to obtain a true equality. But as shown by the attitude on college campuses and by Generation Z, we’re moving towards the right direction. New Albert Einsteins and Marie Curies are born everyday, and years from now, they’ll work side by side to advance science even further. 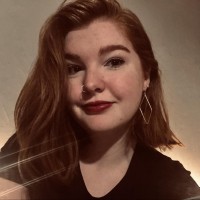 Abbey is a freshman at Boston University studying human physiology. She wishes to be a pediatrician but for now is enjoying college life with her friends and continuing her passions of theatre and dance.