You are here: Home / Life / Going From Atheist to Evangelical

“College will change you,” the old people in my life would say to me. But deep down, I knew I wouldn’t change. I was hell-bent on knowing who I was, what I believed and what I didn’t. I thought I had everything figured out at 17 (dumb, I know) and nothing—I mean absolutely nothing—could change my mind.

Have you ever been so passionate about something that you whole heartedly believe you will never change your opinion on that thing? That was me at 16.  In high school I was an Atheist. This shocked most people because I grew up attending church very frequently; I grew up attending a Christian church and eventually became a practicing Catholic.

As I grew older, I witnessed “believers” acting completely contrary to what the Bible says. I started seeing inconsistencies and negative stories on the news. I saw Westboro Churchgoers holding signs that said hateful and intolerant things like, “God Hates Fags.” The same people who preached about God’s love were the ones standing outside abortion clinics making women cry— telling them their mistake was far too big for God to ever forgive them. What I saw both on television and in real life made me go through a spiritual 180.

Mostly, I felt like nobody was giving me any answers. Nobody cared that what little faith I had left was wavering.

Becoming an Atheist made sense. My problem wasn’t that I didn’t know what to believe, it was coming to the realization that I must have never believed in the existence of God. Science made sense. Science, I could actually see; it proved more factual than any religion I looked into. And I had looked into many others.

My downfall? I was the kind of person that once I believed in something, I couldn’t just let it go. Angered so much by other people and their own religions, I let it affect the way I treated them. I thought that as somebody who wasn’t confined to a religious belief, I was the more open-minded person. But I wasn’t.

My freshman year of college, I went through a falling out with my family. The situation was very difficult and incredibly painful for an 18-year-old who had just moved away from home. But in the same breath, I met someone. We met at a rave and he couldn’t have been more perfect if I created him in a laboratory myself. His one flaw? He was a Christian.

I’m not going to lie, I almost stopped talking to him altogether after finding out about his faith. Harsh? Probably. But I was dead-set on making sure he and I never talked about God if we were going to date. A couple weeks passed and the tension with my parents only got worse. Bible Thumper and I were getting pretty serious, and although I had successfully shut down every conversation regarding religion, he finally asked if I would consider going to church with him.

“I know you’re not into religious stuff but I think it might be good for you,” he explained. I didn’t know how to tell him how stupid he sounded. So instead, I said okay. To be clear, I didn’t go for him. I figured I should at least try before picking a fight. Maybe if I went once and hated it, he would never ask me again.

Well, we went and I absolutely hated it. The songs, the message and even my presence there made me feel uncomfortable. As we got in the car after the service ended, he turned to me and asked, “So what did you think?” I decided it was time to be brutally honest. For a long time following the service, I talked to him about all the things I didn’t like. Through it all he remained calm and gentle. He listened.

I started going to church on Sundays and every Sunday henceforth we’d talk about something else that pissed me off that morning. We talked about everything, from creationism to mission trips. Countless times I referred to creationism as “impossible” and compared mission trips to the Spanish invasion, but he never stopped asking me what was on my mind.

Eventually I started wandering into different campus ministries at my university. “I don’t really know why I’m here. I don’t even believe in God,” I would say to the Christians who befriended me. One girl in particular, Jen, took to me incredibly quick. She was really sweet and insisted we get coffee together later that week.

We ended up at Redeye, a popular coffee shop in Tallahassee, and she asked me a lot about my life. Eventually she asked me about Jesus. Somehow the conversation turned into me talking at her for three hours about how much I hate Christians, and why they’re intolerant, wrong and have a blind faith. Through the conversation, Jen didn’t try to interrupt me and she didn’t try to talk over me. Gently, she introduced me to a God I’d never met. For the first time in my life, I met religious people who welcomed me and loved me the way they felt I deserved to be loved.

Over the course of the following months, Jen and I began to meet up more often. I asked her how she could believe in something she couldn’t physically see, and I learned a lot about the content within the Bible and how it relates to my life. Eventually, I became a Christian and today I understand what it means to have a personal relationship with Jesus.

Although I’m unsure I can pinpoint a specific day when my life turned around, I did notice the change. I found a campus ministry, the Navigators, and it felt like home. They encouraged me to ask bold questions and grapple with what the Bible said. I went from reading the lyrics to songs on a screen during worship to singing them with confidence and feeling them pierce through my heart. For the first time in my life, I saw the love and patience I always believed Christians were called to display. And today, Jen will be my Matron of Honor and Bible Thumper (who actually goes by Ryan) and I will become husband and wife next year.

Caught up in my own stubbornness, I almost missed out on a new way of life. And isn’t college supposed to be about finding your true self and discovering what you believe? Mine came in the form of a newfound spiritual walk that absolutely changed my life. Yours might come in the form of putting yourself out there, trying something you thought you’d never do or maybe befriending somebody completely different than yourself. If you don’t, you might just miss out on something beautiful. 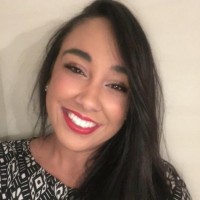 Kyria is a senior Editing, Writing and Media major at Florida State University. Kyria is a Disney fanatic, Jesus lover, traveler, writer, margarita enthusiast and chocoholic. She would like the world to know the correct way to pronounce her name is, "like Syria, but with a K."

10 Reasons the Hoosiers Derail the Boilermaker Special
Next Post: 51 Best Things to Do at Life is Beautiful Festival