You are here: Home / Campus life / UCLA / Give It Up, USC: Los Angeles Belongs to the Bruins

What looks blue, red and gold and sits pretty atop every travel bucket-list? Why, the City of Angels of course- streaked in a confusing mix of USC and UCLA colors. But the time has come to put an end to this age-old feud, for there can only be one winner, one true heir to this gram-worthy hippie-dippie paradise.

Every self-respecting college student knows the right answer, but for the rest of you, let me present some definitive proof that the Bruins emerge on top.

1. No Safety (or Daddy) Issues

USC stakes claim of Downtown LA, undeniably a shadier corner of this sprawling city than pretty, peaceful Westwood where UCLA makes its dwelling. So while Trojans have to scurry back to the safety of their gated campus at nightfall, Bruins can embark on their midnight In-N-Out and Diddie Riese runs usually without having to pull out the taser or pepper spray. Look, I’m not saying that Westwood’s never seen a burglary, but the fact that UCLA’s open campus seamlessly weaves itself into the surrounding neighborhood says a lot about how well integrated and secure this part of town appears.

Meanwhile, since the Trojans felt the need to all but construct a gator-infested moat to ward off outsiders sends a clear message regarding the safety of its locale. But I suppose its shady location proves pretty fitting, given that USC has built up quite the reputation for its involvement in some uh, shady business. I mean, you don’t even need to hail from California to have seen – and enjoyed –  the magnificent memes on USC’s lovely college admissions scandal! Talk about having more issues than Vogue.

If reimagined as people, USC would definitely fit the bill for the rich, snooty, private school-bred white guy who loves to insert his daddy-funded ‘boy’s trip’ to the Bahamas into every conversation, while UCLA would probably land the role of his much more humble, hard-working peer. And typical of most stereotypes, there lies some truth behind this visualization: with over 100 countries proudly represented in its student body, UCLA has established itself as a university that embraces diversity in a way that USC has yet to do. As a public university – not just any, but the world’s No. 1 at that – UCLA plays home to students from all walks of life, allowing people from wildly different backgrounds to befriend and learn from one another.

For instance, about 34% of Bruins identify as first-generation college students while less than 15% of Trojans can say the same. “At UCLA, I am pleasantly surprised by the rich variety of people I encounter on campus. On my way back to the Hill after a busy day of classes, it’s nice to see little kids taking an evening walk with their parents, or buy thin mints from a group of girls selling Girl Scout cookies, or talk to a lively balloon artist giving away free balloons – and his business card. These tiny interactions are exchanges of stories and information that help us better understand the depth of our global community.”  UCLA junior Vaishnavi Tipireddy said. No matter how proudly you don your cardinal and gold, you’d be lying if you denied USC’s notorious history of elitism. Over at UCLA, however, I promise you won’t feel the need to hide behind a Trojan horse in an attempt to fit in. We see (and love) you for the person within.

So the Trojans may have more of an edge in football, but let’s not forget that college athletics consists of more than just this one sport! Second only to Stanford, UCLA holds 118 NCAA championships to USC’s 107. While this may not seem like that big a difference at first, once you remind yourself that UCLA came into existence almost four decades after its rival school, this feat seems all the more impressive. Oh, and most of our athletes made it to the teams without having to count on mommy’s moolah. You know, like the pride and joy of UCLA Gymnastics, Katelyn Ohashi? Yes, Bruins really out here adding to the list of national treasures. Cue the eight-clap!

Hence, it comes as no surprise that UCLA recognizes the importance of research activity and encourages students to take part in it even at an undergraduate level. “Almost all professors here conduct their own independent research which provides ample access to opportunities for first-hand research experience and guidance on how to succeed in the same. Even the academic curriculum within different departments ranging from the sciences to the humanities places a stronger emphasis on theoretical and conceptual understanding which equips students well to succeed in a research position.” UCLA junior Arsh Gupta said. Frontrunners in STEM research, Bruins played a pivotal role in classifying the first-ever reported case of AIDS back in 1981 and now lead the nation in anxiety and depression-related studies.

Oh, and UCLA Health hospitals consistently find themselves featured on top-five medical center lists. Nope, not just in California either. I’m talking about the whole country. And every year, UCLA funnels roughly $1 billion of funding into the maintenance and progress of its close to 400 research labs and medical centers. Yes, I know this sum might not seem all that impressive to Chad from USC whose dad gifted him a Ferrari on his 16th birthday, but for a public university attended mostly by the children of non-billionaires, this achievement invites deep respect.

While the location of both schools ensures a fair number of off-campus dining options, UCLA emerges the clear victor when it comes to the matter of on-campus dining. You see, although USC houses three pretty respectable dining halls serving up fair-to-average food from a decent mix of cuisines, UCLA not only boasts more dining halls (four), it also boasts better ones. Like a certain award-winning, health-themed marvel called B-Plate. Which has its very own cookbook. Consistently ranked No. 1 in the nation for food, the Bruins’ campus really knows that the way to a college student’s heart is through their tummy, serving mouth-watering favorites like brownies and flatbreads with a modern, nutritious twist that even your mom would approve of. And their yummy vegan smoothies? Peak L.A!

With seven Nobel laureates to its name, UCLA sure knows how to produce some top-notch people who passionately pursue their dreams. You know, while casually changing the world for the better. No biggie. USC, meanwhile, has some catching up to do. Yes, despite having a head start of like 38 years. Guess slow and steady doesn’t always win the race; smart and perseverant does. From Ralph Bunche, the first African American to receive the Nobel Peace Prize in 1950 to Randy Scheckman who snagged a Nobel Prize in Medicine in 2013, Bruins consistently prove themselves as mighty leaders to look up to in every field imaginable. Maybe USC should’ve spent more time honing scholars than countin’ dollars, right? Oopsie, what a (Greek) tragedy.

Yes, you can actually afford a spot at the world’s #1 public university without having to sell any of your organs on the black market! Crazy? I know. Meanwhile, to join the Trojan clan, you need to shell out a whopping 58K a year. For context, that proves costlier than even attending an Ivy like Princeton, Yale or Harvard. Seriously, I can’t kid about this stuff. “When I filed for financial aid, I was given an estimate for how much the state would give depending on what type of college I went to. It wouldn’t have fully covered USC’s tuition because it’s already so insanely high. However, UCLA offered me a scholarship that covered all costs so financially, as well as when coupled with UCLA’s higher national ranking than USC, becoming a Bruin was really a no-brainer for me,” UCLA junior Lizbeth Figueroa said. Merit actually takes you a long way at UCLA. Sometimes even further than a Trojan’s private jet.

8. Bruins Conquer Beyond the College Bubble

Like Rapunzel, Trojans look out  down at the world locked away in their precious little gated community, while Bruins get a better taste of life by well, uh, doing some good ole livin’. You know, like working part-time jobs and budgeting on meals like a typical broke-ass college student? Ah, the simple joys of adulting – completely unknown to the average Trojan princess. Stay tuned to see how Karen from USC realizes in her 30s that money can’t kiss all her boo-boos away… around the same age that Kevin from UCLA founds his own start-up with the money he started saving up from freshman year. I suppose life just has different things in store for us.

USC, if you still naively believe that LA belongs to you, we’ll let you keep it. But only because Bruins have shown that the world belongs to them. I mean after all, as the saying goes: Trojans are only good once… and like, not even that good since (if you get my drift) they only work about 97% of the time.

Filed Under: Best Colleges in the US UCLA University of South Carolina 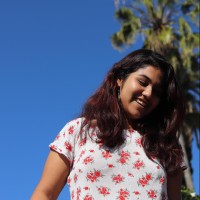 Fight On: 8 Reasons Why USC is Better Than UCLA
Next Post: Fleeting Moments: We’re on the Same Wavelength