You are here: Home / Long Reads / Four Roommates, One War: A Horror Story

Raise your hand if you have ever been personally victimized by your roommate. If your hand is up, you’re not alone. I survived a year with a random roommate who was the exact opposite of me. My roommate was a sophomore engineer with an obsessive cleaning disorder and terrible mood swings. I, on the other hand, was a junior journalism major with average cleaning skills and a great appreciation for tranquility.

As a transfer student entering into a whole new college experience at the University of Florida, I signed my first lease to a beautiful, conveniently located apartment. I didn’t have any friends yet, which left me with no choice but roommate matching. The way most apartment complexes pair up random strangers is through a list survey. You’re asked to rate the level of importance you would attribute to partying, sleeping, studying and cleaning. The system told me that I was compatible with three other girls. It was two-thirds correct. Either the leasing office staff made an error or my roommate found a way to hide her crazy.

In the beginning we had a roommate meeting where we set up clear boundaries of what we expected from each other. This is highly recommended for roommates, yet not always a successful preventative method of drama if everyone isn’t completely honest of what they want their ideal living situation to be. Everybody seemed chill with the idea of rotating days for taking out the trash and sharing kitchen supplies.

And that worked for a while. We all cleaned up after ourselves and were polite acquaintances that said hi and bye whenever the other passed by. But when the fall term ended, our oldest roommate, who organized the original rules, graduated and moved out. And then there were three: one crazy roommate, one out-of-state freshman and me.

The crazy roommate’s mood swings started escalating as she took on the role of the rule enforcer. Everything everyone else did was all of sudden wrong and intolerable. Leaving a dirty dish in the sink, using trash bags that weren’t over the price of $10, leaving the toaster plugged in – all of it was fuel to the fire and she was Magma.

It was no longer safe to enter the living room or kitchen when she was home because of the passive aggressive verbal abuse she would spit at us. I preferred waking up to the sound my alarm clock was set to, but I had to settle for listening to another female ranting to me about her petty issues. My other roommate and I began communicating over text when the coast was clear to exit our rooms in order to cook meals in peace.

Our apartment had become a war zone with her firing shots and us running to shelter. Maintaining the peace was high on the priority list. We tried to resolve all the issues she had with us by first apologizing and then trying to meet her super squeaky clean standards. I’m the first to admit I’m not perfect and wasn’t always timely with fulfilling the chore requirements.

When you have a problem with what someone is doing, a good rule of thumb is to tell that person. People aren’t mind readers. I guess our crazy roommate didn’t realize we didn’t have the super power of reading her mind because she’d lash out about things she believed were obvious to the rest of us.

We were never to throw anything in the trash that could be recycled, but as first-time recyclers we didn’t always know what went where. If we got it wrong the item would end up out of the trash and on the counter with an aggressive note attached to it. Vulgarity was her strong suit.

In the midst of finals week she decided to buy a magic eraser and scrub every subtle line that had appeared on the walls of the common areas. I walked out of my room, puzzled by her Rosie the Robot behavior and saw a note she had taped to the front door that read “If you f–k up the kitchen, you owe me 20 bucks.”

My initial response was to search under the couch for the mind she had lost. Her explanation to the craziness was that we were incompetent cleaners. So much so that even if we did clean the whole apartment, she would just re-do it all by herself.

All her words got progressively meaner as she switched from having a problem with our cleaning standards to having a problem with our personalities. She started teasing on social media by sending us inappropriate pictures over Snapchat of random naked body parts for no apparent reason and posting rude comments to Facebook statuses. There’s no reason for anybody to have to open a snap and see another girl’s bare butt.

Like less handsome stars of True Detective, we collected all these things as evidence by taking screenshots of conversations and pictures of the notes. This was our record of all her wrong doings in case we would ever need it. By the end, I was a 100 percent ready to take her to court, or at least Judge Judy.

After a year of hell, it was time to re-lease and at this point I had rushed a sorority and made a 100 new girlfriends. Two of the girls and myself signed to a new apartment in the same apartment complex. We were placed in a four-person complex and needed one more roommate. My out-of-state roommate was originally planning on staying in the old apartment to avoid having to pay a transfer fee, but when the harassment increased she decided no amount of money could keep her from peaceful living quarters.

Thankfully, the abuse was only temporary as we survived the war in better shape than most characters in any given Grey’s Anatomy finale. We were able to keep our integrity throughout the whole experience by never seeking revenge (Although, trust me, the urge was nearly irresistible). I learned some people can’t find the good in anything and that’s their problem, not mine.

I’m glad to now live in a safe place where my roommates accept my recycling mistakes and seeming inability to turn off the hallway lights. 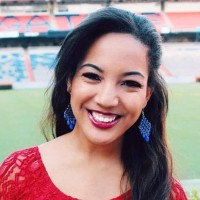 Jasmin is an ambitious writer, designer & photographer. Advertising senior at the University of Florida and a proud member of Theta Alpha.