You are here: Home / Campus life / University of Florida / Everything I Learned My Freshman Year at UF

Here you are at the end of the first semester of your junior year at the University of Florida. You made it. I’m so proud of everything you’ve become. I wish I could relive these last two years with you; they truly have been amazing, but don’t worry, this isn’t gonna be one of those “College is the best time of your life” letters, even though it’s true.

Over the last two years, you learned a lot more than you ever thought you would about UF, college in general and yourself. You learned what it’s like to be a Gator, something you never thought you would be. You learned what everyone said about finding your best friends in college is true. You learned how to balance nightlife and school. (Not to mention, learning all the prime spots for your nights out.) You made good choices, which a lot of people in college can’t necessarily say they’ve done. And who would’ve thought UF would become your home away from home?

The 10 best gifts for every Gator

First surprise to freshman me, you’ve now been in a relationship for almost two years with someone you knew from high school. I won’t tell you who, but it’s been amazing, and he’s become one of your best friends. That other boy though, the one you started dating in like mid-October, yeah don’t date him. He wasn’t toxic or anything, just not worth being tied down to and not really worth your time either. He was what you thought you wanted, but it was more what he wanted. I’m here to tell you not to give up what you want for him. Some people are worth compromising your wants for…he’s not one of them. You deserve to do what you want, not what other people want from you.

However, you do deserve to drop $120 for football tickets, even when certain friends keep rubbing in your face the fact that Noles don’t have to pay for tickets. But honestly, football season at UF is one of the most worth-it things in your entire college career; every game day in Ben Hill Griffin Stadium makes you even prouder to be a Gator. You’ll know loyalty after your first football season because the 90,000-person stadium was full every Saturday even when the Gators sucked. And as your third football season ends, every game has truly paid off.

Also, I’m glad you trusted the universe. Even though your brother had a bad experience with a random, you got lucky. During your freshman year, you and your roommate may not be that close–probably because you go home a lot to cope with the whole not-being-there-all-the-time thing–but come sophomore year, you two become best friends. She quickly becomes your go-to for all things boys and fun. You even took your first road trip together. And you got even luckier this year. *Spoiler Alert,* you finally move in with those high school friends you said you’d live with one day and your once-random roommate. The four of you are going to have a beautiful house, and an even more beautiful friendship. They each make your life a little brighter in their own ways.

I would say take more advantage of the nightlife in the area, but you did. With alcohol and parties every night (if you look hard enough), the turn up quickly becomes a big part of your life. Your body takes a while to adjust to the intake of that thing you’re not legally allowed to have as an 18-year-old freshman. But you chill with the partying come spring semester. Atlantic gets old quickly, and that’s why you only go twice. Simons was really great at first and then started to get kind of sketch. The guys got creepier and older, so it’s probably been over a year since you’ve gone. Your sign night, which yes, you do end up having, took place all over mid—Social, Tina, Fats and even Rowdy’s. I don’t know when you became one of those basic midtown girls that don’t dare to go downtown, but you’ll spend well over 15 nights (sometimes days) in midtown this semester alone.

Check out 21 ways to celebrate your 21st birthday

Still, you did a damn good job on not getting too carried away. You didn’t get kicked out or get on academic probation ‘cause you partied too hard, so I say that’s a win. Sometimes a night in on Netflix is healthy, just don’t isolate yourself. Netflix nights wrapped in your cozy, turquoise and white chevron blanket start to run your life on some nights, but you’ll get out of the rut once you catch up on those 12 seasons of Grey’s Anatomy.

Low-key, I wish you would’ve made some more bad decisions during freshman year. Go out that night all your friends are, even if you have a 7 a.m. class the next day. Odds are someone else in the group has an early class the next day too. (All freshmen have early morning classes.) Go on that date with the guy you met at Starbucks (before getting with bae, obvs). Go to the salsa social where you won’t know anyone. Be a little reckless, babe. You’re allowed to be.

Also, remember when you were a die-hard Miami Hurricanes fan? Well, you quickly become a die-hard Gators fan during freshman year, and with good reason (we’re obviously better). Somehow Gainesville (and UF) crept up on you, me, us. This school and this little-ass town slowly made itself up your sleeve and into your heart. Don’t ask me when this happened because I don’t have an answer, but please cherish it. 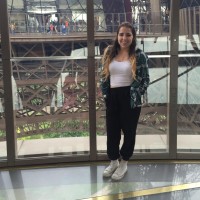