You are here: Home / Life / Don’t Be So Eager to Go to College

I’m just going to be blunt here: The transition to college sucks. I honestly thought it would be no big deal for me—a piece of cake. I think most people like to imagine it will be no big deal for them, too. But as someone who has always considered themselves independent and adventurous, I was in for a rude awakening. And I still am.

It only seems to get more difficult as time goes on.

The summer before college, I lived on edge, filled with excitement and anticipation. I seriously couldn’t believe I was heading to college in a short amount of time. Nor could I believe that I was finally able to move out of my town.

Of course, “Breaking Free” from High School Musical repeated in my head several times last summer, along with the many other nostalgic, teary HSM songs. I always had a deep dislike for my town since I liked to consider myself a “city girl”— though I’ve only ever lived in the stereotypical rural where everyone wears camo .

The move-in day finally came, and we packed my father’s car with everything I own. We headed for campus to what I called at the time: “the best day of my life.” I really just couldn’t wait to get out of my town.

Once we got to campus, we spent the day unpacking the massive amount of stuff I brought out of the massive amount of boxes. We took several trips up and down the elevators from the third floor to the ground level, rearranging my room so I could visualize every combination of bed, desk and wardrobe possible. So intriguing.

My parents stayed the night in town when I moved in but left early the next day. I knew saying goodbye to them would be one of the greatest challenges, but it felt more heartbreaking than I imagined. I didn’t want to cry to convince them that I was perfectly independent on my own. I wanted them to think “I don’t need nobody.”

But the second they left I teared up. I spent my entire first weekend essentially decorating my room, practicing walking to my classes and sobbing silently at night over everyone I missed. I mean, it doesn’t hit you how much your life completely changes until the clock strikes 2 a.m. and you’re crying to yourself, wondering why you can’t go home.

I thought it would get better soon, but it didn’t. I felt worse. As the days passed, I missed my life. I didn’t feel like college was my life. It felt like I put my actual life on hold with so much more for me waiting back home, even though I knew this was far from the truth.

The stress made me break out like crazy and eat less. I wasn’t making friends as easily as I hoped. In only the first week, my workload already felt unmanageable. I’m not quite sure why “sylly week” is a thing because there was certainly no way I could afford to get “sylly” every weeknight with the work my professors assigned.

I also got lost a lot. I used the Google Maps walking directions to get just about anywhere on the campus. Basically, the entire first two weeks of college I felt like a complete failure. And everyone on social media seemed like they were having the time of their lives.

My friends back home seemed to adjust rather well to the new changes. I’m usually one for change, and I never had a problem before with making friends or doing well in school. I couldn’t understand why I struggled so much already.

I would call my boyfriend or my parents often and just cry. I would cry about how much I hated college and about how much I wanted to go back home and transfer to a smaller school. I didn’t like my classes. I didn’t like being away from my family and I didn’t like trying to navigate what felt like a never-ending campus with 40,000 students. And I especially didn’t like hand washing all my dishes. I didn’t like any of the changes. Maybe I simply wasn’t ready. Everyone continued to reassure me that I would turn out fine and that everything takes time.

And though it was hard to see that things would get better at the time, they are finally starting to now. I am finally making friends and meeting my professors. I’m trying to slowly get stick with a consistent schedule of going to the gym, and doing my work before classes. And the workload isn’t actually too bad because of all the downtime you get in college.

After many discussions and many BuzzFeed quizzes, I finally figured out that I’m much more suited to an artsy career and a single major. And even though I have virtually no experience with photography besides the frequent iPhone picture, I’m going to try the photography minor out. And hopefully late drop my political science class.

It’s all starting to come back together, but I can’t help but still feel an overwhelming void of emptiness within me. Maybe some regret too. All the time I spent complaining about how I hate high school and my small town could’ve been used embracing it instead.

I never thought I’d say this, but I miss high school. I miss being around my friends all the time, knowing a lot of people in my smaller school and building tight bonds with some of my teachers. Still, I wouldn’t go back to high school, because I only strive to move forward.

And as much as I complained about my town, I miss it dearly. I miss the freedom of driving around on the occasional sunny winter day and singing to throwbacks like Sean Kingston with my best friends. Going to my dance studio every night, grabbing coffee and listening to live music at all the cute coffee shops in the next towns over, browsing through record stores and thrift shops—I miss all of that.

Luckily, I’ll return home during breaks and reunite with most of my friends again to do the same old shenanigans we used to. But it will never be the same. We won’t laugh about the memories we created together in our town, at our high school anymore. Instead, we’ll all live our separate lives, making new memories in new states we’ll never step foot in, with new friends we’ll never meet. The new experiences we encounter will differ from one another. And though that’s kind of weird to think about, it’s good.

Change is good, and the distance apart from each other will only bring us closer together. At the end of the day, if I had to give the best advice for transitioning to college, I would emphasize that it will get better. But don’t be so eager to leave for college just yet.

Filed Under: Back to School Life 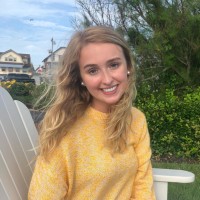 Katy is a first year student at Penn State. She is a double major in broadcast journalism and meteorology. She enjoys ballet, hiking, working out, writing and all things kittens.

10 Best Netflix Stand-Ups for Your Procrastinating Pleasure
Next Post: English Is My Portal to Another World