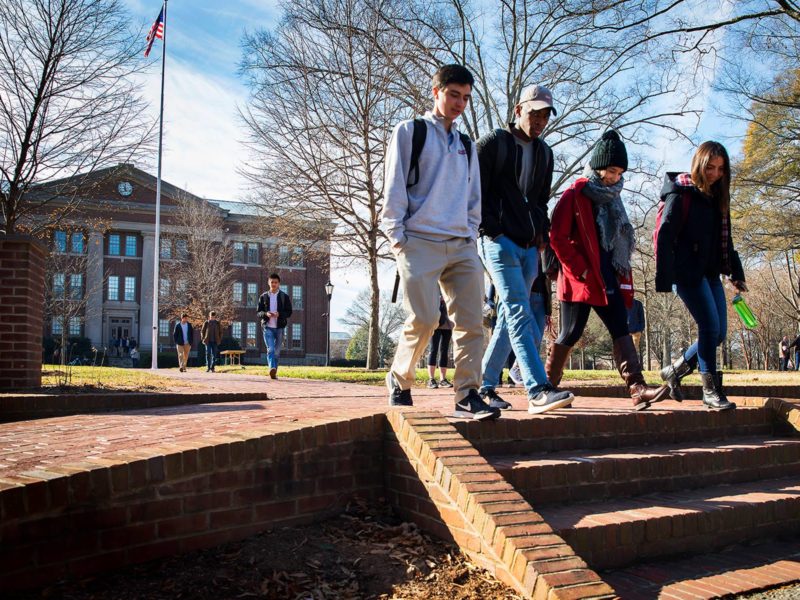 Davidson College presents itself as a small liberal arts college with a toned-down atmosphere. The students’ main concentration tends to be academics. “There is a really intense stress culture present within the student body,” said Abigail Santiago, computer science freshman. “Davidson is really academically centered, so I’d say this is the most important part of my experience so far.” Because of its small population, students begin to recognize each other and learn a little about everyone around them. Davidson’s students emphasize the connections that they make with each other and with their professors as integral parts of their college experience.

Students do their work in the E.H. Little Library, which has research resources, course guides, archives and special collections guides, access to databases and lots of study space. Students can also make appointments with research librarians or archivists. Davidson students often gather in their student union, the Alvarez College Union, where they frequent its theatres, conference rooms, restaurants, gym and game room. “My favorite place on campus is the Union because that’s where the regular hangout area is. You can get food and there are couches to hang out, it’s like the hub of campus,” Valerie Donoso, a biology freshman, said. They also frequent Summit Coffee, an on-campus coffee shop owned by Davidson alumni. Students often attend Davidson’s sporting events. The school, home of the Wildcats, has Division I sports teams including basketball and soccer.

Why did you choose to go to Davidson?

“I chose Davidson because despite the academic rigor, it felt like home. The people are open hearted and generous and the professors truly care about their students and their success,” Abigail Santiago said.

“The honor code is very serious here. It is something we all agree to when attending the school. Therefore, there is a zero-tolerance policy for academic misconduct. Otherwise, people may receive disciplinary action for underage drinking, smoking marijuana, etc.,” said Davidson freshman Blake Botelho

What would you tell incoming freshmen about your school?

“I’d tell incoming freshmen to develop strong time management skills and to reach out to professors because they are willing to help,” Tsega-Ab Abera, freshman, said.

What is your favorite Davidson memory?

“I’d say the most impactful thing that I’ve experienced is just the good conversations with other students. Even though that seems like a corny answer it’s true, there have been plenty of days where the highlights of those days were just when I ate meals with my friends and we just spent a while talking to each other. That is something that happens consistently and it’s something that is always enjoyable,” Benjamin Santiago, computer science freshman, said.

What is your favorite study spot?

“The science building is where a lot of my classes are that I really enjoy so I feel comfortable in that space. It’s brand new and feels really cozy and organized. There are study areas within the building,” Donoso said.

According to the class of 2022 profile 5,712 students applied to Davidson, 1,104 were accepted and 517 enrolled. Of these students, 725 applied early decision and 312 enrolled early decision. The middle 50 percent of the admitted class of 2022 had an SAT reading and writing score of 640-720 and math of 650-730. Of accepted students, 85 percent reported they were in the top 10 percent of their class. The majority of the class of 2022 identifies at white (67.1 percent), followed by Hispanic/Latinx (8.9 percent), Black/African American (7.9 percent), international (7 percent), Asian American (6.8 percent) and other/unreported (2.3 percent). While it is challenging to get that acceptance letter, students who attend Davidson succeed in the academically challenging and motivating environment.

FacebookTweet
Best Colleges in the US College Guides

Previous Post:College Relationships In a Nutshell
Next Post:No Money, No Problems? How to Make the Best Out of an Unpaid Internship