You are here: Home / Life / A Very Climactic Introduction to College Theater

As a young girl, my father played “Zip-a Dee-Doo-Dah” for me on the stereo while I danced around in my diaper. Little did I know, those moments of dancing naked in my basement foreshadowed a traumatic event that would occur in my adulthood. “Zip-a-Dee-Doo-Dah” would become a tune I turned to during the most, well, “climactic” moment of my life.

I immediately began my search for a monologue. I researched online, emailed my high school theater director, visited the library and even spoke with the college director of the show to help me as I prepared for my first college audition. When I finally found a piece, I spent hours reading it aloud, trying to be intentional about my sense of character, gestures and voice inflection. My roommates probably considered me insane and already wanted to transfer schools, but I carried on, wanting so badly to be cast.

Before my audition time, I began to fill out the form, which read, in bold letters: “This production contains nudity. Are you comfortable with being nude on stage?” I had two options: I could either check “yes” or “no.” Checking yes would increase my chances of being cast and prove to myself and the theater department, that I, Emma Deihl, was college acting material. Checking “no” would destroy my acting career forever, causing me to become isolated from the world, afraid to explore the progressive themes of college theater.

I sucked in a breath full of air, and with determination, checked the “yes” box. “Nobody has to know how utterly uncomfortable and terrified I am at the thought of standing stark naked on stage,” I thought. “I am an actress. I will act as if I’ve done it a million times.” Obviously, I was lying to myself and the rest of the world, but I stepped into my audition, and thankfully, I remained fully clothed.

I must’ve done okay because a few days later, my name appeared on the final cast list: Emma Deihl – understudy. I felt quite accomplished, considering only six students made the actual cast, along with a male understudy, and myself. However, I don’t think I realized what an understudy role entailed.

One evening, toward the beginning of the rehearsal process, the actress playing Mrs. Daldry, one of the lead female roles, found herself unable to attend rehearsal. So, as the understudy, it fell to me to fill in for her. I figured I would just walk through the blocking and take a few notes.

Instead, I found myself lying on stage in a hospital bed, legs spread apart, with a senior theater major holding a fake vibrator beneath the sheets and my stage directions which read, “Make natural orgasmic noises.” WHAT?! I only managed to let out an awkward five notes of “Zip-a-Dee-Doo-Dah” as a way to humorously meander my way around faking an orgasm. Everyone laughed, probably only to cover the discomfort they felt. I wanted to flee from that bed, from that room, from the performing arts building, from Luther College, from the entire state of Iowa forever and never be seen again.

To clarify, Luther College gave an incredibly tasteful, mature and realistic performance of In the Next Room. I hold great respect for the actors and actresses who were able to put themselves in such vulnerable positions (literally) before a room filled with their peers, professors, and family members. I, however, discovered I did not feel particularly comfortable with exposing my naked body and producing orgasmic moans on stage. Does that make me a lesser actress? Probably. 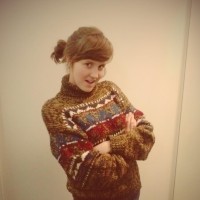 We Aren’t All Meant To Be Greek–and That’s Okay
Next Post: When Your Guts Take Precedence Over Glory