You are here: Home / Life / Entertainment / Sports / Not Everyone in Boston Cares When the Red Sox Win the World Series

I wouldn’t say I don’t like sports. A good basketball game will keep me on the edge of my seat, screaming along with the rest of the fans in the stands. And don’t get me started on the Pittsburgh Penguins. But, had I not been in Boston this year, I would not have known that the Boston Red Sox won the 2018 World Series last week. It reminded me of my freshman year when The New England Patriots won the Super Bowl—a time when I didn’t feel the team spirit in the least.

In the past, being home with family and friends became the only way I could get excited about big sports events. And even then, I would only feel excited about the Super Bowl parties or “wear your team jersey” dress down days.

I didn’t have anyone to get me hype for the season, or even to remind me that the season happened. Most of my friends didn’t pay attention until later in the season when Boston’s team made it to the playoffs. College dorms don’t come equipped with a living room with the TV or table with chips and dip. It has no a couch that I could lounge on with friends.

And even though my dorm had a lobby with some space to watch TV, it just didn’t feel the same.

During my freshman year in Boston, the Patriots won the Super Bowl. I didn’t really support a specific football team, so I didn’t care who won. But, standing on the chair, looking over the crowd in the lobby of my freshman dorm erupting into crazed cheers when the Patriots won felt exhilarating.

I cheered along with everyone, jumping, laughing and hugging the nearest person to me. The game unfolded insanely. And the energy in the room stuck with me for a hot minute. But, walking up to my dorm, the feeling faded and I fell asleep dreaming of something else.

The next day almost everyone acted high off the win. Talks about attending the celebratory parade a few streets away came off the lips of nearly everyone in the dining halls. Meanwhile, to me, it felt  just like an average school day. I didn’t feel much pride for the win. I didn’t care at all, actually.

Now, as a  junior, I’ve watched the Red Sox win the World Series. It seemed like these wins taunted me and my disinterest. But, while I did occasionally watch football, I didn’t pay attention to baseball ever. I never watched it, and in fact, I considered it snooze-worthy.

Nothing against baseball players, but the agonizing length of the game outweighed the fun of it for me.

This year, though, I live extremely close to Fenway Park. I often navigate through the crowds on game days. Taking the train during the past few weeks while the World Series games took place in Boston required planning ahead and an assertiveness to deal with rowdy passengers. So you could say that I became familiar with it all.

However, while the crowds solicited internal eye rolls from me, I also felt a little tug inside. The groups of people clad in players jerseys and face paint carried with them an air of electricity. Their enthusiasm became something to envy, even though I also saw it as obnoxious.

The night of the World Series win, I brushed it off, knowing it would only affect the convenience of finding an Uber on the day of the parade. Pictures of the parade flooded my Instagram feed. So many people attended, even people who didn’t particularly care for the Sox. The win brought a comradery that urged me to care.

The day of the parade, my friend and I talked about it in one of our classes. “Honestly, I’m pretty apathetic about baseball,” she said. “But, it does seem fun to care about something.”

I agreed wholeheartedly. Caring did seem fun, especially when about something as big as the World Series or Super Bowl. Sure, I cared about many things. I felt the same exhilarating rush of adrenaline watching Aquaria and Eureka O’Hara dance battle for the crown on the Rupaul’s Drag Race finale. Or, alongside my mom watching Nate Diaz fight Conor McGregor in a UFC match. I loved feeling invested. It’s just that I didn’t feel like forcing myself to care about things that don’t naturally interest me.

But, could I help it if the Red Sox craze made me want to at least try? No. Many other non-baseball fans share this same weird feeling of missing out on the fun. And some even conjured this feeling into action.

“I didn’t really care until the Red Sox won,” said Boston University student Olivia Longo. “But I did go to the parade. It was sick.”

Even some non-fans like Longo took it to the streets to participate in the celebration. She even told me that she climbed on top of a gas station to witness the players in the parade pass by. I’m telling you, Boston takes its sports seriously. It’s as if I’m in the eye of a hurricane, watching the storm of wild-eyed fans blow past.

So, while I may feel like the odd woman out being a non-Sox fan in the heart of Boston, I can still enjoy the idea that my home-away-from-home town is crushing it in the sports sphere.

Maybe before I graduate, I’ll watch a game at Fenway. Or maybe not. But, no matter my feelings—or lack thereof—

for all of this, I’ll still always brag to my friends and family back home that I lived in Boston for two major sports wins just for the heck of it. 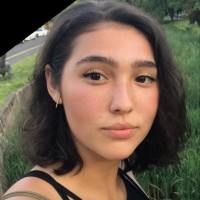 A Junior at Boston University studying journalism with a minor in biology. Enjoys music, poetry, baking, weird movies and laughing with good company.

24 Things to Do in Berkeley in 24 Hours
Next Post: Hurricanes and Government Agents: My Senior Job Fair Experience