You are here: Home / Life / LGBTQ+ / How to be the Best LGBTQ Ally a Friend Could Have

You and your best friend became attached at the hip back when you sat next to her on the first day of kindergarten. Since that day you’ve communicated through looks, finished each other’s sentences and showed up to her house just to eat her food. When your BFF soulmate comes out as gay, you want to make sure you have her back just like the days on the playground. Check out the secrets to being the ally your friend needs.

Allies know that love wins. Show the world you care with this tank top: 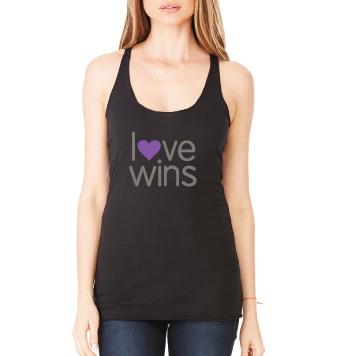 Take her life and future seriously

Referring to an LGBTQ person as “going through a phase” will get you nothing but dirty glares. If your brother comes out as gay and you still talk about him having a wife one day, you’re openly denying how he identifies. “My parents are a good example of allies. My father tells me to marry a woman from the College of Business so she can handle my finances. My mother always likes things I do on Facebook, even bizarre things like drag shows,” said Megan Foley, a Florida State junior that identifies as a lesbian. Talking about the pride parades and future relationships like they’re set in stone shows your love is here to stay.

Don’t think religion has to get in the way

If you’re picturing an ally as just rainbow-clad hippies constantly waving signs in protest, you couldn’t be more wrong. Allies can be anyone from your conservative neighbor to your religious classmate that sits next to you in bio. “[One] misconception is that if you are a LGBTQ ally, you cannot be Christian. This is 100 percent false,” said Nick Pelliccio, a College of Central Florida senior that identifies as gay. While controversy might have tainted the idea of supporting those identifying as LGBTQ in church, your ally efforts don’t have to take a break every Sunday morning. “I know myriads of Christians who are pro-LGBTQ,” said Pelliccio.

Do it for the right reasons

Being fake never got anyone very far. If you just say you’re an ally to not seem like a jerk, you’re hindering progress. A transgender University of Central Florida student, who wished to remain unidentified, has seen people fade from the scene when times get tough. “There are plenty of people who will be there for the festivals and parades, but they tend to not be there when we need them most through the hard times,” she said. Liking “The Ellen Show” or having a transgender neighbor in no way makes you an ally. Not having a true love for the community means you won’t be there during the fight for rights and acceptance.

Stay in your lane

Your avid dedication might make you feel like you’re a part of the team, but you’re more of a cheerleader. “I know you’re excited to be a part of the community and to be helping, but you are a supporter of the community; you are not actually the community. You are the parent at a soccer game, you are not in the game. Don’t be that parent that comes on the field,” said Foley. Though, don’t think the cheerleader role is insignificant. Be a strong community supporter without overstepping your bounds.

Know you’re the ones with the power and use it

The search for superior allies never ends, but the community is not simply looking for loving friends and family. We live in a society where the majority has more power than the minority. The role of allies is overwhelmingly influential. “It’s a big thing with the social structure, its heterosexual people who govern the structure. If the ones with the power aren’t actively trying to change it, it’s not going to change no matter what,” said Foley. The mostly heterosexual majority in political office and on school boards make the policies. Gaining the support of those powerful people is how we’ve witnessed things like sexual orientation and gender identity put in non-discrimination laws.

Ever heard someone use the phrase “it’s the little things that count”? This cliché has more merit than just in relationships. Calling yourself “tolerant” may seem like a positive thing, but you’re really sending a bad message. “You ‘tolerate’ a sprained ankle or a bruise; it’s something bad and you just kind of bear with it. You don’t want to be just tolerant of a variation of humanity,” said Foley. Preaching tolerance tells people they’re on the right track if they just “put up with” the community. If someone tells you he tolerates your presence, that’s not exactly a love fest. Encourage others to call themselves supportive or loving of the LGBTQ community.

If you heard someone say your friend looked fat in her crop top, the earrings would come off and all hell would break loose. The LGBTQ community needs all the defensive action it can get. “If you heard a co-worker slandering those of the LGTBQ community, an ally would speak up in defense [of] the community while a non-ally would stay silent,” said Pelliccio. Letting a few comments slide can have monumental outcomes. “Offering encouraging words to those who are struggling to accept themselves can be the difference between suicide and an ‘aha moment’,” said Pelliccio. Never hesitate to put a stop to bullying or slander, ignoring negativity will not create positivity.

The Logistics of the Linguistics Major
Next Post: 10 Ways to Craft Your Way into Dad’s Heart This Father’s Day