You are here: Home / Life / LGBTQ+ / Being a Queer Student Has Been Hard, But Not for the Reason You Think

I met my best friend during my first semester at college when I hit on her at a house party. A friendly girl with dynamic eyes and carefree disposition, I couldn’t help but approach her. We were hitting it off when she suggested we hang out in my dorm, to which I immediately agreed. I was chivalrous, even offering her my jean jacket for the cold walk home. As some pizza rolls warmed up in the microwave, I clumsily admitted to her “I think you’re cute…in a gay way.” She smiled at me with sympathy and let me down easy: she was straight, but she still wanted to be friends.

This would be the first of many failed attempts at queer love at my small Midwestern college. I gained a best friend that night, but I also got a glimpse of what lay ahead for the next four years…

DATING, IN GENERAL, IS HARD. BUT IT’S EVEN HARDER WHEN YOU DON’T KNOW WHO YOU CAN DATE…

i.e., who’s LGBTQ+ and who isn’t. Girls can be especially hard to read. “Is the girl at the bar telling me I’m pretty because she’s into me or just to be a hype-woman? If I flirt with her will she even is able to tell?” Or worse, “If she can tell, what if she sees me as predatory?” These were just a few of the anxieties that circled my head as a bisexual college freshman trying to date girls for the first time.

But the hardest part of queer dating for me isn’t the uncertainty of the opposite party’s sexuality. It’s the measly size of the dating pool itself.

Here’s how I can best explain my circumstances at a school just shy of 3,000 undergrads: Imagine the whole sum of women on campus as a circle. Inside, a smaller circle composed of those who are LGBTQ+. Smaller than that, those who are actually out. Now shrink it to those I’m actually aware of and those aware of me in turn. Finally, compress that low number of candidates into those with whom I share an established mutual attraction. This brings us to the grand total of, you guessed it, next to none.

THESE STATISTICS AREN’T FROM A LACK OF EFFORT.

I’ve inserted myself into queer campus programs, club meetings, and of course dating apps. All of these experiences built me a support system and a wonderful network of friends. In short, my sexuality is celebrated and seen. But with the limited options, it hasn’t earned me a strong romantic connection.

I’m not alone in my frustration either. A queer friend of mine once stopped dead in her tracks when I casually mentioned knowing a girl who was openly a lesbian. “And you never thought to tell me?!” she exclaimed. To her, this girl was a cold glass of water in an arid desert. And I couldn’t blame her. I too had suffered the dreaded “there are no more singles in your area” screen after only six swipes on Tinder.

That being said, I’ve still experienced my fair share of dating throughout my college career—dating boys that is. I’ve engaged in everything from hook ups to long-term relationships. But when you’re only ever engaging with one half of your sexuality, it’s hard not to feel like some vital experience is missing.

A CHANGE OF PACE

It wasn’t until I was a sophomore that I landed my first date with a girl (and, ironically, with little effort). It was a classic case of knowing someone who knew someone who mentioned they thought you were cute.  A bashful connection through the gay grapevine. Needless to say, I was ecstatic.

A quiet, bookish type with dyed-red hair and small gauges in her ears, she was everything I could have dreamed of. We went out a few times, going out for coffee and getting to know each other. I learned she had a passion for politics and dreamed of being a writer, just like me. I even helped her step out of her comfort zone and took her to her first college party. As we walked home across campus, we had our first kiss in the snow. It was straight out of a (gay) Hallmark movie.

Similar to my endeavors with boys, our connection later fizzled into a lasting friendship. But I didn’t feel sad or embarrassed by this like I did my freshman year. Instead, I found solace in having dated a girl at all. Having proven to myself that queer love could exist for me, even at a small school in Iowa. 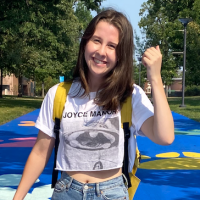