You are here: Home / Student Travel / Appreciating the Darkness Before Dawn

We sat in the Hosea Kutako International Airport for four hours. By the second hour, I covered the entirety of the arrivals hall. By the third hour, I browsed through every shop or stand available. After a 15-hour flight to Johannesburg, then a two-hour transfer to Windhoek, the group of us waited relentlessly for the shuttle bus that was supposed to carry us deeper into the eastern region of Omaheke.

In the least enticing font possible overlaid across what looks like a standard desert photo you see on MacBook desktops, a wall panel overhead read:

I threw myself a usual window seat to get comfortable for the four-hour bus ride to the Harnas Wildlife Foundation. From the side window panel, I saw the foreign land expand and unfold before me. Namibia seems as loosely populated as Wikipedia suggested. In the vast expanse of nothingness, occasional herds of wildebeests moved across the plains, lining up neatly one by one in shrubs.

Halfway through, we stopped at a gas station. At this point, the heat began to wane and the sky turned pinkish, becoming darker by the second. Curious children roamed around the gas station, staring and grinning cheekily at their foreign visitors.

By the time we hopped back onto the bus, it didn’t take long for the sun to disappear entirely. As darkness encroached, stars adorned the night sky, visible with our bare eyes. When the front gate of Harnas appeared, Tarryn shrieked in excitement, waking up everyone. When the van stopped, I hopped out reluctantly and stepped onto Namibian sand for the very first time.

Each step I took felt like a slip backward as my boots sank into the sand. No matter how much pressure or energy I exerted and no matter how I positioned my stepping foot, sand always required more energy than the usual gravel. I must admit, it was not until someone spotted a lone ostrich staring at our arrival that the idea of wildlife dawned on me.

The group of us huddled and squeezed onto one wooden bench under dim lights. Like specimens subject to scrutiny, we filled out forms and surrendered our valuables to brown envelopes to keep them protected. In return, we got keys to our cabin, located in the “Central Business District” of the volunteer village.

Our first weekend involved a tour around the farm, briefings under the tree and training sessions where we learned how to properly feed the animals. Per tradition, newbies helped with food preparation for three days following our breezy weekend of sightseeing.

Our group, Snobabs, got minimal exposure to fiercer animals like cheetahs or mischievous creatures like meerkats. Food prep involved chopping up fruits and vegetables for vervet monkeys, baby baboons, tortoises, parrots and more. Other groups butchered swing slabs of meat across wire fences.

If you get your job done early, volunteers can roam around the farm and interact with animals. Volunteers loved interacting with Audrey, a blind vervet monkey, and Gumbi, a brown hyena whose diet constitutes solely of eggs, mongoose meat and crushed eggshells. Both Gumbi and Audrey kept their cool almost all of the time.

Baboons are entirely different. It’s part of their nature to test you by pulling your hair or tugging at your clothes. To pass their test, you must maintain your composure no matter how much pain they exert during their curious inspection. If you ever cross a baboon, first tie your hair up, empty your pockets and eliminate any loose items hanging from your clothes. Once you gain their trust, you’ve accomplished the very first step of understanding their group behavior.

Occasionally, we took cheetahs Koema, Sessa and Sesaldi out from their enclosures for brief strolls along the outskirts of the village. Walking alongside us, they seemed more like big cats rather than fearsome creatures. Sessa, who lost most of his tail to a band of mongooses while as a cub, always walked slower than his two brothers. In cage cars, it became a true privilege to sit amongst the cheetahs rather than in the passenger’s seat. The trick was to approach from the side, never from behind. By allowing them to see you, they no longer consider you a threat but a friendly source of comfort.

Though most of the animals stayed either in enclosures or in the outskirts of the volunteer farm, some followed us back to our lodgings. Gemsboks, springboks and warthogs appeared every now and then to greet us outside our cabins or join us for meals. The warthogs, known as Happy Meal, Ham and Bacon, particularly enjoyed following volunteers around the village.

One morning, I woke up to Happy Meal’s loud grunts and kicks against our cabin door. To turn his attention elsewhere, I wedged the door open with just enough space to throw out an empty water bottle. Then I ran as fast as I could to avoid an immediate follow-up. I took a wrong turn and found myself nowhere near the breakfast parlor. While Happy Meal continued his chase, I walked impatiently into an unknown territory marked by discarded bushes and patches of woodland.

The sun gradually rose behind me, with a million speckles glimmering across loosely arranged leaves from the branches hanging overhead. I walked and walked, not seeing a human being in sight. When I reached the edge of the farm, I realized I could no longer hear Happy Meal’s footsteps. Retracing my own footprints in the sand, I went back to where I started and took the alternative route to find our usual meeting place.

While the story of how I almost got chased out of the farm by a warthog quickly spread around, I thought about my brief disorientation. Come to think of it, we know so little about the paths we must take. Odds are, something wrong might happen. But at the same time, we can always retrace our journey. After some twisting and turning, we always come to make sense of the most bizarre adventures we choose to take.

For my last day at Harnas, the morning sky seemed almost unreal and apocalyptic. That far-reaching and ever-expanding palette of orange and peach blended into the blue canvas looked like watercolors. In areas where tints of amber traversed across the sky, the morning bright and evening blues slowly collided, mimicking two silhouettes dancing silently. Little by little, streaks of dark orange dispersed into the atmosphere. Layers of red and blue stacked on top of each other, ascending higher and darker into the unknown. As if time stood still for a moment, scarlet layers spread out hastily and violently, seeping into every cloud.

Eventually, the view that I grew accustomed to over three weeks finally emerged. Just like any other day, it was only darkest before dawn. 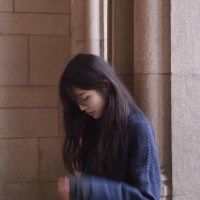 Currently studying journalism at New York University, Tianqi is an aspiring photojournalist intrigued by the human experiences and emotions. The intricate dynamics between time, space and communication within mediums of photography and the written language is what fascinates her the most.

Powerful Woman Leader: Representative Ana-Maria Ramos
Next Post: My Spring Break Story: I Went Clubbing at Home for the First (and Last) Time