Sex and the City’s Carrie Bradshaw remains known as a Manolo wearing, Manhattan living, $40,000 worth of shoes owning little lady and yet… she’s “just” a writer. The average English major keeps the status of sneaker wearing, close to campus living, $40,000 worth of debt owing hipster and yet… also just writers. Just like that, Carrie Bradshaw’s weekly column about her sex-capades turns into books and fame while the real world writers stew with jealousy. Minus all the sex and the shoes, Carrie’s writing dreams don’t flourish without some rain to dampen her newspaper columns, her little MacBook and all of her relationships. Writers were alongside Carrie as she faced literary humiliation and cosmopolitan-induced writer’s block. Are the ups and downs of Carrie’s writing career relatable? Abso-f*cking-lutely.

1. Writing About Your Personal Life

Samantha, Miranda and Charlotte know that their sex lives will end up in Carrie’s columns, but do the men (Mr. Big or the politician that likes to be peed on, for example) agree to the same terms? As a writer, your life events and the people in it are bound to be expressed in your craft. When you get called out by an acquaintance for writing about them or a reader associates your poem with your last ugly relationship, you embark on a slippery slope. It’s not quite clear if Carrie ever gets in trouble for printing the titillating details of her sex life, but we can only imagine that the men secretly enjoy the impish fame.

2. When Your Computer Crashes

Carrie’s sorrowful, albeit a little pathetic, meltdown over her dead computer is as significant to a writer’s woes as a significant other is to Carrie herself. A relaxed post-sex Carrie never thinks about backing up her computer at all, until its contents come crashing down in the middle of her post-sex related column. She exclaims that her, “whole life was on that computer” as she rushes her pashmina wrapped MacBook to Tech Support. Not all of us react as dramatically as Carrie, but losing countless hours of writing to the mistake of not backing up hits us hard in the heart.

3. Expecting Writing To Pay For Your Lifestyle

We all remember the writer’s joy when Carrie boasts that she snagged $3.50 a word. The big bucks (and working for Vogue—wow) are urban writer’s legends. The riddle of the writer is this: to follow our passion for writing or…to pay rent. An even bigger riddle is how Carrie manages to have 100 pairs of strappy sandals and pumps on a weekly writer’s budget.

4. When You’re the Object of Criticism

When Carrie ends up on the New Yorker as “Single and Fabulous?” instead of “Single and Fabulous!”, the intent of the article becomes much more than just a matter of punctuation. Along with her hungover face atop a circulating magazine, Carrie must endure the humiliation of people assuming that she represents a singular image. As writers, that scene of finger pointing is all too familiar. We know that not everyone will like our work and really, it takes a lot of guts to put ourselves out there with our naked written words. With writing comes opinions, and with opinions comes scrutiny. Even so, just like Carrie, we’ve got the confidence to pick ourselves back up again and keep on strutting and writing.

5. Having Nothing To Write About

Even through the many men who don’t decree, “you’re the one” to Carrie, our beloved relationship columnist still goes through deadbeat writing phases. Like that one time “socks and the city” and “men as socks” are the meat of her next weekly column. The frenemy of writer’s block comes back to haunt us as we try to come up with that perfectly angled piece, only to blindly stare at a blank document. Carrie usually goes shoe shopping or calls Stanford, where coincidentally she meets the next guy to sleep with and write about. Not all of us can use that kind of home remedy, but Pinterest and Tinder give us the same results.

6. When You Get Published

We can all recall the moment Carrie’s face lights up when her newspaper editor tells her that, “they’re interested in turning [her] columns into a book.” Carrie gets the works: a cover shoot, a frilly book release party and an advance on her book after it’s translated into French (because evidently she knows more about sex than the French.) When that moment finally comes for us that sense of success deserves a round of cosmos. Believe it or not, someone actually wants to read our work and promote what we put our literary heart and soul into. It’s hard work paying off, it’s a chance to show the world that we’ve got things to say, and it is just that fabulous. 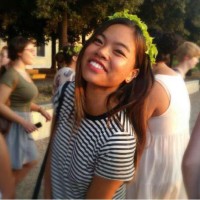 Haley is a senior Creative Writing major and French minor at the University of Washington. When she's not sipping wine and attempting her own great American novel, she's probably eating ice cream or persuading her friends to get ice cream with her. If her hypothetical books never reach the shelves, you'll find her in her fallback career as a gymnastics coach or bakery owner.