You are here: Home / Life / Entertainment / 10 Songs to Pregame for The Jonas Brothers’ Comeback Tour

Unless you live under a rock, you know that The Jonas Brothers are back. New York University first-year Steffi Alex said the Jonas Brothers and their music makes her think of her entire childhood. Well, Alex, your childhood has returned. After a nine-year hiatus, the three brothers we know and love, Nick, Joe and Kevin, are making music together again—but this time, their leading ladies are in the mix, featured in their latest music video for “Sucker.” New music can only mean one thing: a comeback tour.

Keep reading for the 10 best Jonas Brothers songs to get you ready.

Off the boys’ first album, “Year 3000” is a classic. This cover of Busted’s original song made girls across the globe swoon when it first released back in 2005. And honestly, it’s still a banger. It’s what made so many of us fall in love with The Jonas Brothers in the first place. Listening to it now brings back the perfect mix of nostalgia and young “I’m going to marry this celebrity even though I’m only nine and they have no idea I exist” love. Just like their great-great-great granddaughters, this song will make you feel like you’re doing fine.

I can still hear the opening to this one, “We don’t have time left to regret, HOOOOOOOOOOLD ON!” You sang it in your head, didn’t you? Joe’s crunchy vocals against Nick’s angelic back-up with just a hint of harmony equals perfection. “Hold On” is definitely part of the Jonas Brothers trifecta (the songs you think of when you think of the Jonas Brothers) along with “Year 3000” and “S.O.S.”

Speaking of “S.O.S.,” bop to another JoBros from back in their Disney days. If this song didn’t make you want to hold these fragile Jersey boys in your arms ‘till the hurt is gone, you’re lying. How could you stand-up a Jonas? What was wrong with the girl in this song? None of them deserved this kind of emotional destruction. That last “call I’ll never get” is a real tear-jerker. You can almost hear Nick choking up. Whoever stood up Nick probably feels pretty silly right about now. Her epic, major, callosal loss.

4. When You Look Me in The Eyes

It doesn’t get more Jonas Brothers than this song. The passion, the emotion, the innocence—what more do you need? Seven-year-old me sobbed at the thought of Nicholas Jerry Jonas serenading me like I was the only girl in the world. (Honestly, I’m still sobbing just thinking about it.) This song is perfect for any self-care event you have coming up: an at-home mani-pedi, some good old shower singing, a much-needed crying-until-you’re-fully-dehydrated session. Whatever the occasion, Nick, Joe and Kevin got you!

This song makes every fan feel some type of way. “You’re beautiful but you don’t even try.” C’mon, that’s got to get you: soft, innocent, pure, with just a hint of Disney-approved teen boy rebellion (special shoutout to Kevin’s killer guitar solo). What better way to spend three and a half minutes?

I am fully prepared to argue that “Burnin’ Up” is the best Jonas Brothers song to ever exist. Those first few chords and fade into Joe’s first line get me every time. You can hear the cool guy confidence in the intro and feel how powerful of a woman brought these boys to their knees. Can’t you just picture yourself in those high heels and red dress? That powerful woman they’re talking about is you. Don’t even get me started on the music video. It’s night, we’re poolside, we’re parodying classic movies, Selena Gomez and Tay-Tay Swizzle make appearances, Big Rob’s big spotlight moment… I mean… it’s all too perfect, right?

7. Kids of the Future

“Kids of the Future” is a staple song in Disney’s Meet the Robinsons and quite frankly, the only reason I saw the movie in the first place. I didn’t even know what the movie was about, but I was sold the second I heard the Jonas Brothers. This cover and spin-off of Kim Wilde’s “Kids in America,” was a proper generational anthem. We, along with Louis and Wilbur, really are the kids of the future.

Picture this: “Time is still, the sun will never find you, you leave it all behind.” It’s just you and him forever. That’s it. That’s the song. Rom-com perfect—am I right? This song makes you feel so safe, so loved. Off one of their later albums, the song is a little bit more complicated musically and lyrically. You can start to feel the brothers maturing and growing. Heartbreaking? A little, but the music is so good. You still get that boyband feel but with some musicianship outside of “stupid, cookie-cutter pop star stuff.” (#camprockkid5ever)

One of the last true singles the Jonas Brothers released before calling it quits, this song kind of slaps. They changed their sound a little bit on this one but it’s something I could get behind even if it was released today. You’re definitely getting some complication with this one and, back in 2009, it had me feeling like a real music fan instead of just an avid Radio Disney listener. The other good thing about this one, another amazing music video. The part where Kevin multiplies, or Joe climbs up an attic ladder into a wrestling ring or when Nick is just driving in the desert (that dark sunglasses look worked for him in so many ways). All around good song, good visuals—just good wherever you angle it.

This list wouldn’t be complete without a Camp Rock addition. “This Is Me” was the song, the song of all misunderstood girls who just loved Joe Jonas. This song made you believe that one day you too could break out of your awkward shell and emerge strong and beautiful with a Jonas Brother secretly pining after you all summer. Demi Lovato and Joe Jonas created hope with their performance and I don’t think I’ll ever get over it. 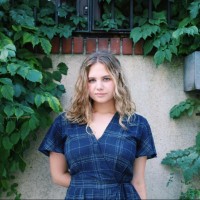 Aleksandra is a freshman at New York University studying journalism and sociology. When she's not writing she can be found cooking healthy recipes, running or nostalgically scrolling through her Snapchat memories.

10 Extracurriculars for Med School that Will Get You an Acceptance Letter
Next Post: Thank You NYU for Making Me Live with a Random Roommate